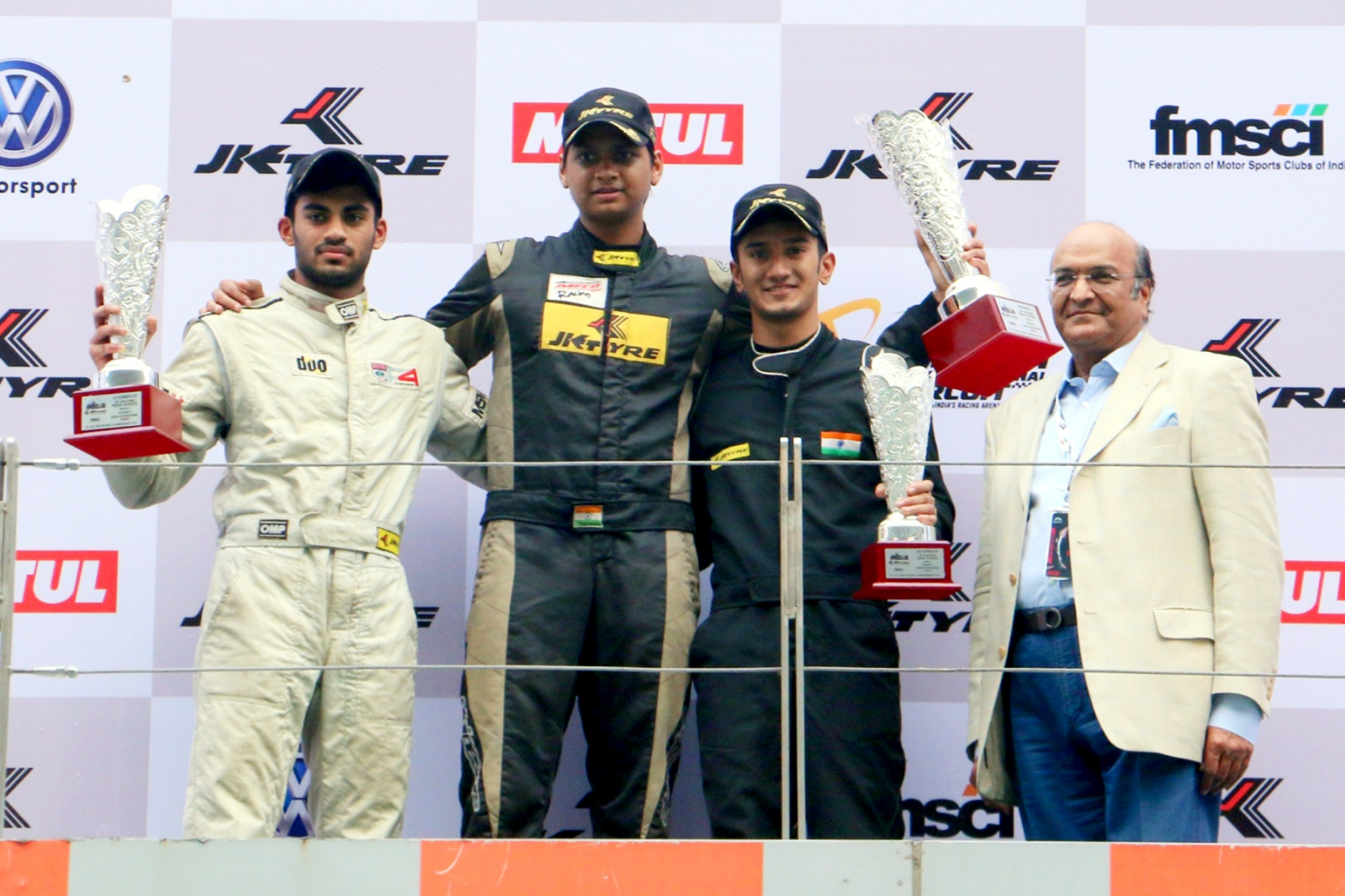 Greater Noida, November 29, 2015:The 18th JK Tyre Racing Championship concluded with a bang as a packed Grand Stand witnessed some of the best and the most adrenaline-pumping motor sports action in the country at the Buddh International Circuit here today.

Chennai sensation Vishnu Prasad, who had sealed the victory on Day 1 itself, added another feather to his cap surpassing 100-points tally for the season in JK Racing India Series with yet another emphatic victory in the final race of the day. With his third career Championship title, Vishnu further enhanced his growing reputation as one of the contry’s premier racing driver. The talented Ananth Shanmugam, and Krishnaraaj Mahadik finished second and third for the season. Both showed great promise throughout the 4 rounds. With more consistency, they will be expected to provide a tougher competition to Vishnu in the coming years.

Comeback-man Ajay Kini from Dark Don Racing, who returned to the grid after a long sabbatical, announced his arrival in style. A fourth-placed finish in the final race of Formula LGB4 Series was enough for the 26-year old pilot from Chennai to seal a Championship triumph. In the closely fought championship, Vishnu Prasad and Raghul Rangasamy finished second and third as Ajay’s vast experience proved to be the clinching-factor.

The second-race of the day – Formula LGB 4 saw an early stutter due to a major collision in the second lap that started with Sandeep Kumar of Meco Racing Chennai getting hit and crashing in to two other racers. Three cars got eliminated from the race as a result. The fiercely contested battle between Dark Don Racing drivers Krishnaraj Mahadik, Sudharshan Rao and Vishnu Prasad ended with Krishnaraj crossing the finishing line first with a narrow gap of 1.090 seconds over Sudharshan. However a belated penalty to Krishnaraaj relegated him to the third-place as Sudarshan took the top-spot. Vishnu finished second in the race.

The Formula LGB 4 was followed by the exciting JK Super Bike Cup (600CC and 1000CC) in its innaugural year. Juzar Motiwala outsmarted Vijay Singh of Rajasthan by 1.552 seconds in the 600CC category. Gurvinder Singh Mantharu emerged third, however the Championship trophy went to Vijay Singh. The 1000CC category witnessed a closer contest between Simranjeet Singh and Bhupinder Singh from New Delhi who are on top of the league tables. Simranjeet won the race with a 2.755 seconds gap over Deepak Ravi Kumar and also emerged the overall category champion, stealing a march over Bhupinder Singh. Sandesh Prasanna emerged third in the race battling against an injury, and was seen limping after the laps were over.

Adding to the day’s excitement, was a stunt-show organised by world-renowed stunt expert Terry Grant who entralled the crowds with his skills.