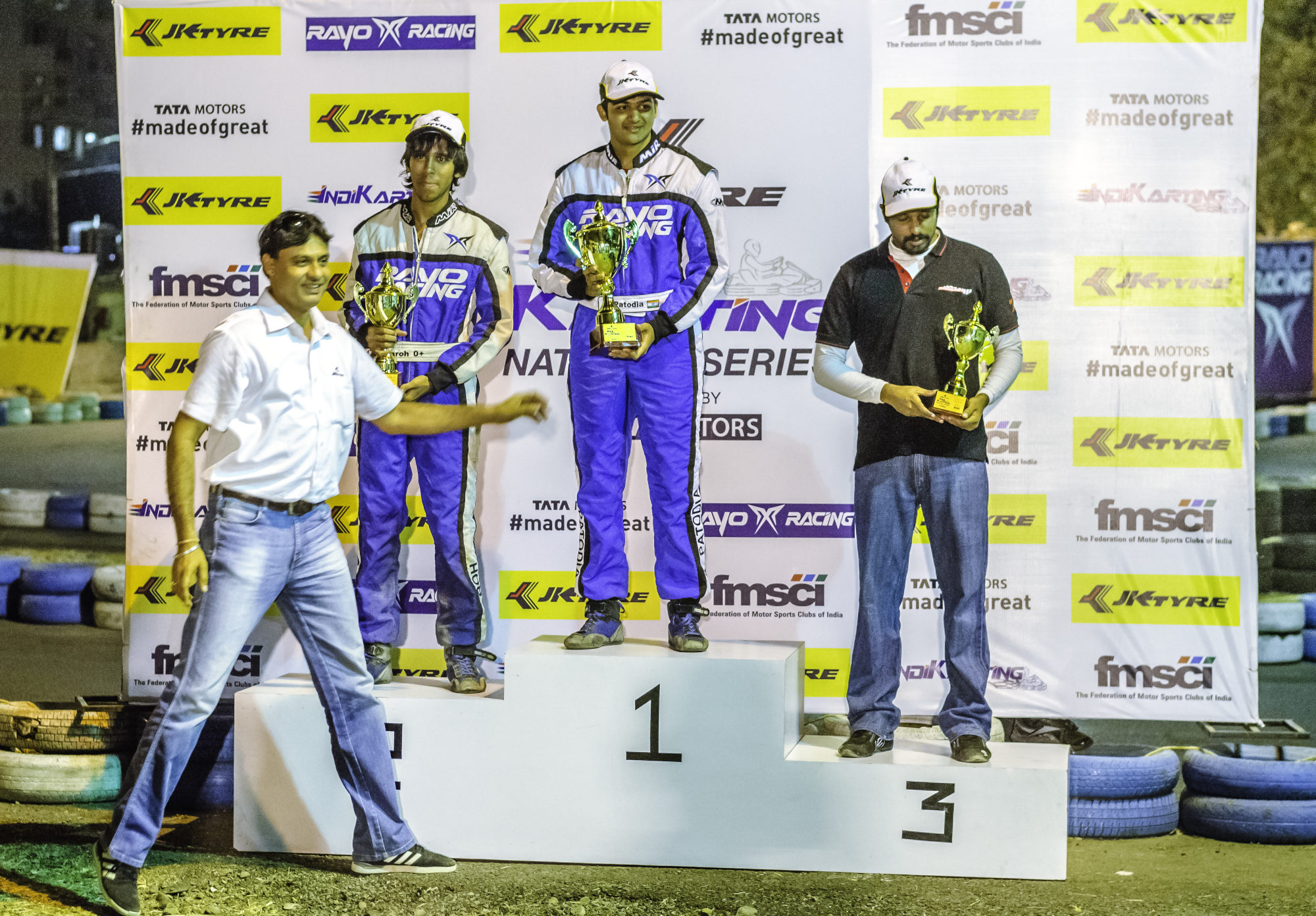 Pune, 25th April 2016: The JK Tyre  IndiKarting National Series, powered by Tata Motors, got off to blazing start at the IndiKarting Circuit in Kharadi. Despite the searing temperatures, the opening round of the latest karting series received 173 entries across various categories.

The latest karting series promoted by JK Tyre, the pioneers of grassroots development of motorsports in India for the past 30 years, has created fresh avenues for youngsters and masses to experience the thrills and spills of motorsports at a negligible cost. With close to 70 percent of the entries coming from first timers, the JK Tyre IndiKarting National Series, which uses four-stroke karts, is here to stay.

Apart from the Pro categories (Senior, Junior and Cadet), in which the participants own or lease karts, the concept of ‘arrive and drive’ for the rest of the classes provides unparalleled ease of racing for the masses to get a taste of motorsports.

As anticipated, the Pro Senior category was the crowd entertainer with extremely close racing up and down the grid. Aanjan Patodia of Pune won Race 1 after a tough battle with Mumbai’s Aaroh Ravindra with Rahul Sharan of team Race Concepts, Bengaluru finishing in third.

In Race 2, which started with in the reverse grid format with the winner of Race 1 starting last, Aaroh Ravindra was the star of the race after starting in 13th place. He displayed impeccable race craft to finish second, while Rishabh Rathi did well to win Race 2 convincingly having started from second place on the grid. Aanjan Patodia maintained his domination in Race 3 as he pulled off a brilliant move taking the outer line at the first corner to overtake Aaroh.

In the Pro Cadet class, Aadityansh Kaulshi convinvingly won Race 1 after dominating the proceedings. But in Race 2, he couldn’t make much ground after starting under reverse grid rules, which was won by Raunaq Sinha, who cruised to victory. In Race 3, Hoshmand Elavia turned out to be the surprise package after making an excellent start from the second place on the grid to grab the lead. Aadityansh tried his level best but couldn’t find a way past Hoshmand, who won the race.

The Senior Open race also provided for edge of the seat action throughout the race. After a close fight, Mumbai’s Jatin Vora overcame the competition to take the winner’s crown ahead of Aman Singh Bhui and Tukshad Daver.

In the Interschool category Arihand Taleja of St. Mary’s School came out on the top, while Nitesh Deshmukh representing Bhojwani School finished in second place ahead Aryan Shrivastav of Vibgyor High School.

The Senior Amateur was the biggest draw of the opening round of the JK Tyre IndiKarting National Series in terms of entries. After some stiff competition Malcolm Elavia from Mumbai won ahead of Saurabh Sutar and Kamran Dubash. All three winners of these three classes gained free entry into the National Final at the last round in Delhi, where they will compete against the winners from other cities.

In other classes, Zubin Chinoy won the Master category ahead of Sameer Tahir and Kejas Shah, while Romilla William won the Women’s category ahead of Aishwarya Dhumal and Khyati Mody. In the the Media category Sirish Chandran, editor Evo magazine finished on the top step of the podium ahead of Viraj Gaikwad and Aatish Misra. The top honours in the Corporate class went to Jatin Vora ahead of Arish Davar and Malcolm Elavia, while Kejas Shah won in Senior Plus class beating Zubin Chinoy and Sajid Sakarwala to second and third places respectively.

“It is very reassuring to see 173 entries in the first round of the JK Tyre IndiKarting National Series. It shows that motorsports has huge potential in India. Thanks to JK Tyre and Tata Motors, who are subsidizing costs for the participants, racing has become a lot more accessible to everyone” said Rayomand Banajee, of IndiKarting.