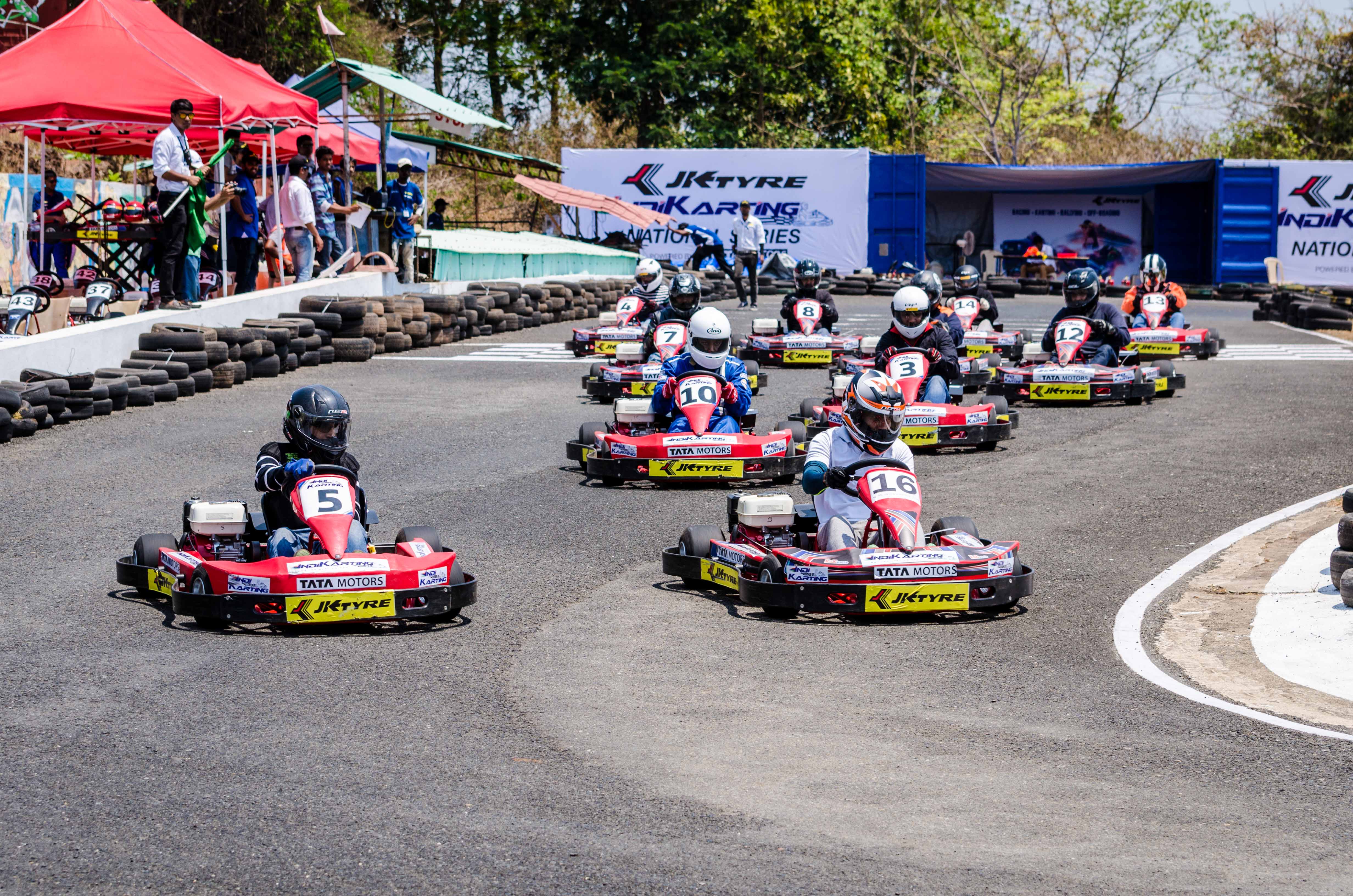 Goa, 2nd May 2016: The JK Tyre IndiKarting National Series brought back Kart racing to Goa after a span ofover 5 years as the scenic Goa Karting Circuit played host to the 2nd round of India’s largest Karting Series. The event received an enthusiastic welcome with an impressive 141 entries registered across all categories.

The star of the event was Aanjan Patodia from Pune who notched up 3 victories out of 3 races in  the Pro Senior category including the crucial reverse grid start race 2 where he climbed from last on the grid to 1st place. Aaroh Ravindra was a close 2nd place each of the 3 races, but was unable to mount a challenge on Aanjan. Bengaluru’s Rahul Sharan managed 3rd in 2 races while Rishab Rathi came 3rd in 1 race.

The crowd favourite was the Pro Cadet category for the youngest racers in the age group of 7 to 12 years. Aadityansh Kaulshi from Pune set the track alight with back to back victories in the first 2 races. His victory in the reverse grid race came amidst some excellent overtaking manoeuvres. Hoshmand Elavia from Mumbai did well to win race 3 & also bag 2 runner-up trophies. Kogileti Saatvik earned a runner up trophy in Race 1 while Ruhan Alva managed third place on 2 occasions.

The Senior Open & Senior Amateur races saw an all Goan Podium with Akshay Hede, Niazam Ahmed & Tej Naik bagging the top 3 spots. In the Amateur category it was Sufiyan Shaikh, Ameen Shaikh & Digvijit Chavan who locked out the podium. The top 3 from both these categories will win direct invitations to represent Goa, at the National Finalin Delhi in June.

Digvijit Chavan won the corporate category ahead of Donovan Vaz & Taj Naik, while Kevin Barreto won the Master category defeating Niazam Ahmed & Clibe Joshva of Pune. Avdumber Hede participating in his first race in many years won the Senior Plus category ahead of Nickson Shiva & Akash Makwana making it another all Goan Podium.Jonathan Kuriokose won the Pro Junior ahead of Aditya Joshi.

“It was great to see such a fantastic turnout from the Goans. They practically locked out the podiums in all the support categories. 141 entries is good for Goa & thanks to JK Tyre & Tata Motors, we have once again been able to bring motorsport to the masses” said Rayomand Banajee,  Director, RR Motorsports Management Pvt. Ltd.

The JK Tyre IndiKarting National Series powered by Tata Motors was created with the intention of expanding thereach of Motorsport in the country. The FMSCI sanctioned National Series isalso the largest Karting series in India & the world’s most affordable series of its kind.

The JK Tyre IndiKarting National Series now moves to Vadodara on 14 & 15 May, before moving on to Ludhiana & then finishing in the National Capital Region in June.