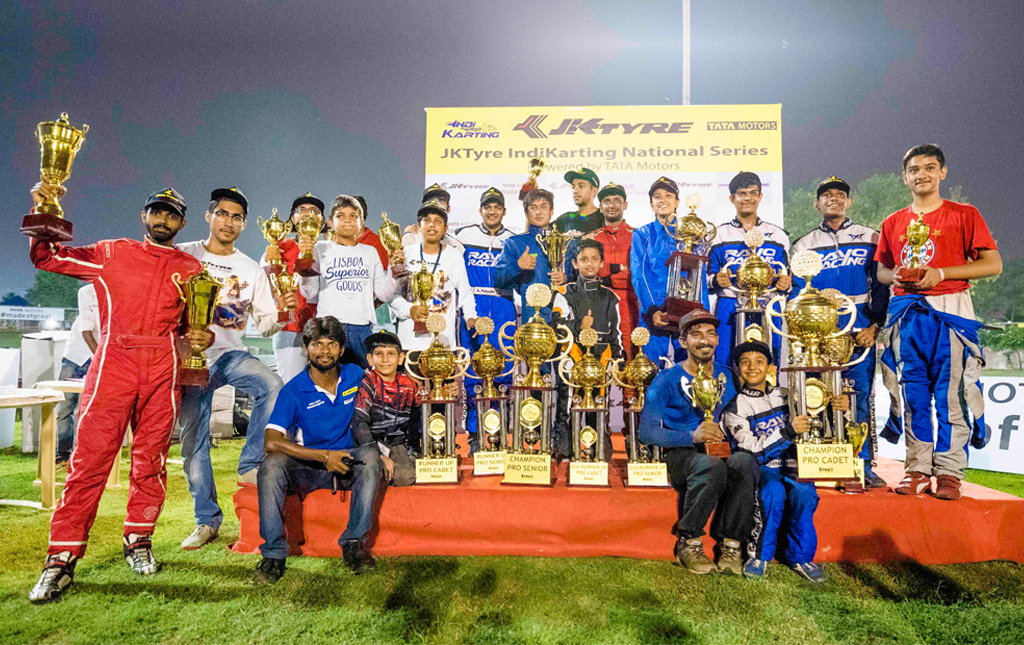 Noida,  4th July 2016: The fifth and final round of the JK Tyre IndiKarting National Series, powered by Tata Motors was a resounding success as Wonder Speedway played host to India?s largest karting series. The series received over 1000 entries till the fourth round and the final round saw over 300 entries from all over the country across all categories.

In the end it was Aanjan Patodia in the Pro Senior, Jonathan Kurikose in the Pro Junior & Aadityansh Kaulshi in the Pro Cadet category who took the laurels. They earned the maximum points in their respective categories after 15 races across five rounds and in the process, claimed the fully sponsored drives in the JK Tyre-FMSCI National Rotax Championship.

The finals of the Pro Senior category was the most exciting affair of the day Aaroh Ravindra from Mumbai led the standings by a sole point going into the final round. However, Aanjan drove superbly in the final race to claim the title. Aaroh finished 2nd ahead of Rahul Saran from Bangalore. The Pro Cadet had Mumbai?s Hoshmand Elavia in 2nd, followed by Bangalore?s Saatvik Kogileti in third. Aditya Joshi from Pune & Mira Erda from Vadodara were 2nd & 3rd in the Pro Junior.

The winners will now graduate from the 4-stroke karts to the much faster Rotax 2-stroke karts with top speeds of 100-105 Kmph in the JK Tyre-FMSCI National Rotax Karting Championship, the country?s only recognised karting championship. This will give them a unique opportunity to race and test their skills against some of the best talents in the country.

Earlier in the day, tough competition saw numerous entertaining battles in the various races. Aaroh Ravindra from Mumbai entered the final round of the National Round virtually neck & neck with Aanjan Patodia. Race one of the Pro Senior proved to be Aaroh?s undoing, when he had a jumped start. He then fell down the order, but climbed back up in wonderful fashion to third. However, the jump start penalty took away the brilliant result. Aanjan Patodia won ahead of Varun Anekar & Alex Bora. The reverse grid in second race saw Aaroh win ahead of Rahul Sharan & Aanjan. In the final race of the event, Aanjan once again proved his mettle and took the chequered flag ahead of Aaroh & Varun. In the Pro Junior category, Mira Erda picked up two victories while Jonathan Kuriakose bagged one.

The Pro Cadet saw Hoshmand Elavia win from 2nd on the grid ahead of National Series leader Aadityansh. local lad Aryan Vasishta finished in 3rd place. Race two had Saatvik Kogileti hold of Aryan, while Hoshmand came from the back to take the 3rd place. The third was once again dominated by Hoshmand while Aadityansh & Saatvik completed the podium.

“We are delighted with the response that we have received for the JK Tyre IndiKarting National Series. The idea behind this series was to promote karting among the masses and this series has achieved just that. JK Tyre has always believed in promoting motorsport and making it more accessible and affordable to talent irrespective of affordability in a sport which has traditionally been highly inaccessible. We are sure that this initiative will prove to be a milestone in unearthing and promoting new talent in the country.” said Sanjay Sharma, Head Motorsports and Corporate Communication, JK Tyre & Industries.

“The five Round JK Tyre IndiKarting National Series has achieved our goal of opening up motorsports to the masses. The huge number of entries & the fact that over 65% participating in any form of motorsport for the first time is proof. We are really thankful to JK Tyre & Tata Motors for believing in us & supporting this venture” said Rayomand Banajee, promoter of IndiKarting