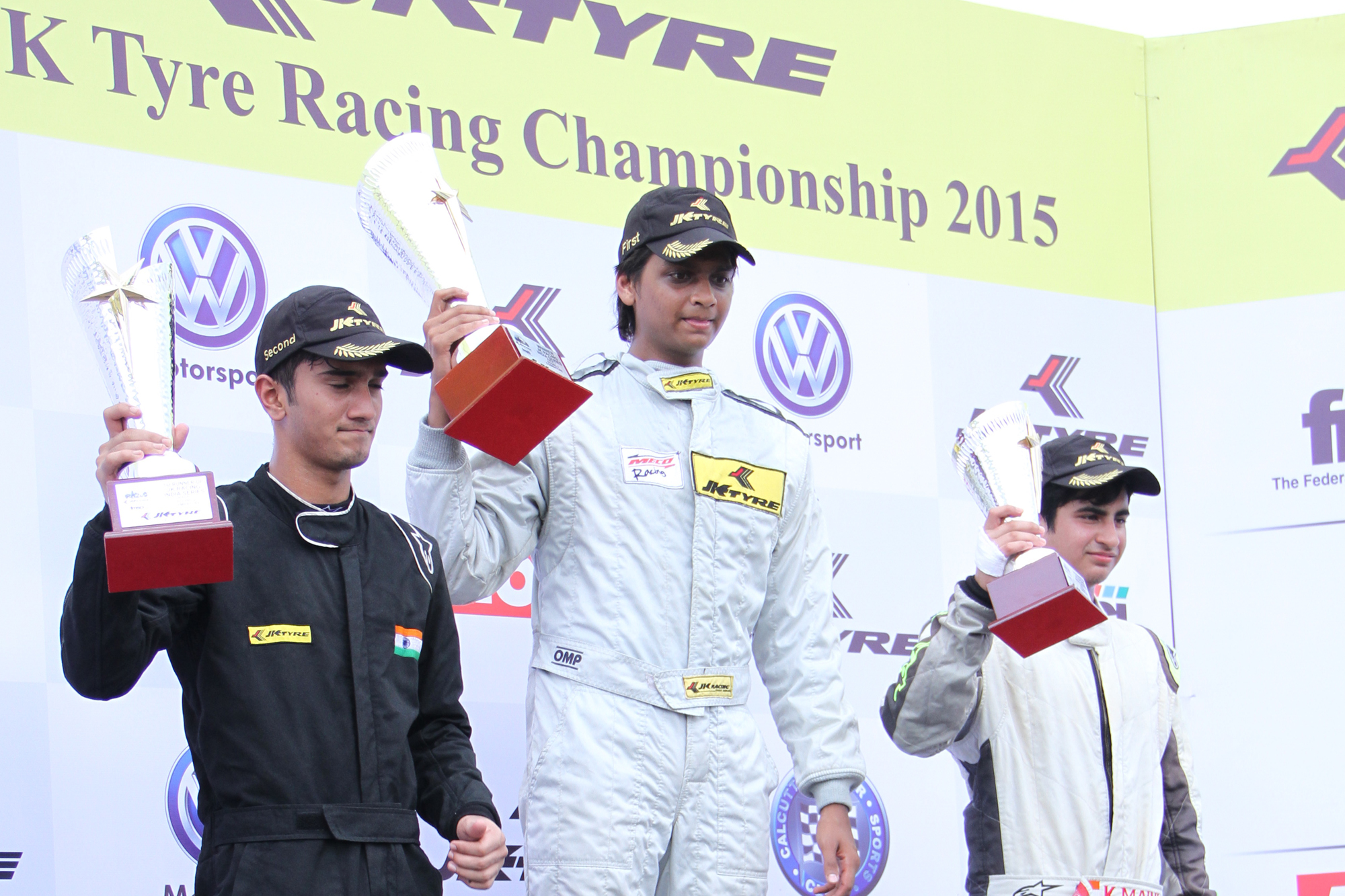 Coimbatore, Sept 5, 2015: Motorsport fans were in for an action packed day as Round 2 of the 18th JK Tyre Racing Championship kick started here at the Kari Motor Speedway on a bright and sunny day. The day featured 4 action packed races-one each of the JK Racing India Series and JK Tyre-Volkswagen Vento Cup and two races of the Formula LGB 4.

Vishnu Prasad from Chennai, Ajay Kini from Chennai and Anindith Reddy Konda from Hyderabad clinched wins at the JK Racing India Series, Formula LGB 4 and JK Tyre-Volkswagen Vento Cup respectively on Day 1 of Round 2 of the Championship.

The day started off with the qualifying races of the three categories. Kolhapur lad Krishnaraj Mahadik, Ajay Kini from Chennai and Anindith Reddy finished first in qualifying races in the JK Racing India Series, Formula LGB 4 and JK Tyre-Volkswagen Vento Cup respectively. The competition level in the championship has reached an all-time high as the top ten drivers were within a second behind each other in the qualifying session.

In the JK Racing India Series, 12 drivers lined up on the grid with Krishnaraj Mahadik leading the pack. Vishnu Prasad finished first followed by Krishnaraj Mahadik and Dhruv Mohite. As the lights went off, 15 year old Kush Maini overtook Krishnaraj in the very second lap but was soon overtaken by the experienced Vishnu Prasad in Lap 3. Vishnu stretched his lead as Krishnaraj tried to catch up but was only able to overtake Kush. International driver Constantino Peroni gave the boys a tough competition in the fight to finish in the top ten. However, it didn’t turn out to be a good race for Sandeep Kumar, Ameya Bafna & Dhruv Mohite who couldn’t manage to finish the 15 laps race. Round 1 winner, Akhil Rabindra was pretty disappointed with his day’s performance as he finished eighth in the race.

In the Formula LGB4, the drivers from Team Dark Don took the top three spots in the qualifying and therefore started in the same order in Race 1 of the day. Multiple spins and five drivers going off the track made it the most exciting race of the day. Ajay Kini started on pole and convincingly led from start to finish. Closing in second after a dramatic turn of events with the safety car coming out twice on the track, Raghul Rangaswamy closed in with a second place finish after starting seventh. Diljith TS from Thrissur proved to be lucky for Team Avalanche Racing as finished in third place to take the final step of the podium. Chittesh Mandody from Kolhapur from Team Dark Don Racing who started second couldn’t keep his place in the race intact as he was overtaken by other drivers. Chittesh had to settle in for a seventh place. Round 1 winner Vishnu Prasad who started sixth on the grid could managed to keep his position in the Top and finished fifth. It was a disappointing race for Bengaluru boy Sudarshana Rao from Team Dark Don Racing as he spun off the track and his race ended there.

Race 2 was restarted after a major collision between five cars in corner two in the very first lap. It was race over for Karthik Shankar, Sudarshana Rao and Rohit Khanna after the incident. Post the restart of the race started, it was a closely fought battle for the top three position between Ajay Kini, Raghu Rangaswamy, Chittesh Mandody and Diljith. Diljith was securing his second place but in the eleventh lap, a hit from behind made him spin out of the track and he was out of the race. Ajay Kini finished first, Raghul Ramaswamy finished second and Krishnaraj Mahadik finished third.

With the battle going down to the wire, the drivers are going to fight it hard tomorrow to extend their lead in the championship before heading to the challenging Buddh International Circuit for the last two round of the championship.