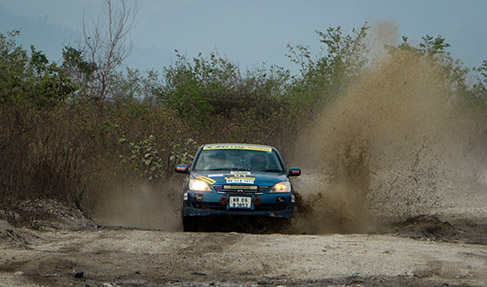 Hailing from the small port town of Haldia in West Bengal, Ajgar Ali, along with Erode’s Mohammed Musthafa, achieved the rare feat of winning their third successive title in the country’s only international TSD (Time, Speed, Distance) rally.

In the national category, Ajgar Ali and Mohammed Musthafa ended with a final tally of 1110 penalty points to emerge victorious. Securing the second position were the team of Gagan Sethi and Rajkumar Mundra with 1847 penalty points while Jogendra Jaiswal and Nagarajan Thangaraj ended their campaign in third position with 2035 penalty points.

This year’s title battle saw a nail-biting finish. The team of Jogendra Jaiswal and Nagarajan Thangaraj who started the final day (Day 4, Saturday) as championship leaders lost their bid to the crown in the very final moments by missing the penultimate time control and suffering a 900-penalty points blow.

“We made a big mistake (by missing the second-last time control) and we handed the championship title to them (Ajgar and Musthafa). It is a disappointment for us, but the winners deserve the title,” Nagarajan Thangaraj said.

“We are very happy to score this hattrick. It was a very exciting rally and I can say that the seventh edition of JK Tyre Himalayan Drive is the best TSD rally in the country till date. The competitive sections were superb and posed a tough challenge to drivers, navigators and our cars,” said Ajgar Ali.

He was also all praise for Just Sportz, the rally organisers. “This rally is always well-organised and everything is transparent. The hospitality of the organisers is unparalleled,” Ali added.

This year’s victory takes the total winning tally of Ajgar Ali and Mohammed Musthafa to four titles (2013, 2017, 2018 and 2019) since the Himalayan Drive was first held in 2013. The team of Sudip Ghosh and navigator Arindam Ghosh were the only other team to have won more than one championship title at this event (2014 and 2016). Anubhav De and co-driver Chandan Sen won the title in 2015.

The last leg of the rally was flagged off from the Kalimpong stadium and started with a steep climb on the road from Mungpoo to Jorebungalow that was lined with verdant forests and offered majestic views of snow-capped peaks of the eastern Himalayas for a few kilometres. This was followed by another competitive section downhill through winding mountain roads of Rohini. The third and last competitive section was a tough drive stretching over nearly 23 kilometers through the bed of the Mechi river that forms the border between India and Nepal.

India, then graduate to Asian level i.e. to Formula BMW, which is now JKRAS and then they move to higher levels of racing. JK Tyre now stands closer to achieving its mission of bringing world-class motorsport to the Indian masses. The Racing and Karting programme by JK Tyre has been the breeding ground for the country’s  motorsport talents like Narain Karthikeyan, Armaan Ebrahim, Karun Chandhok, Aditya Patel and other emerging talent.