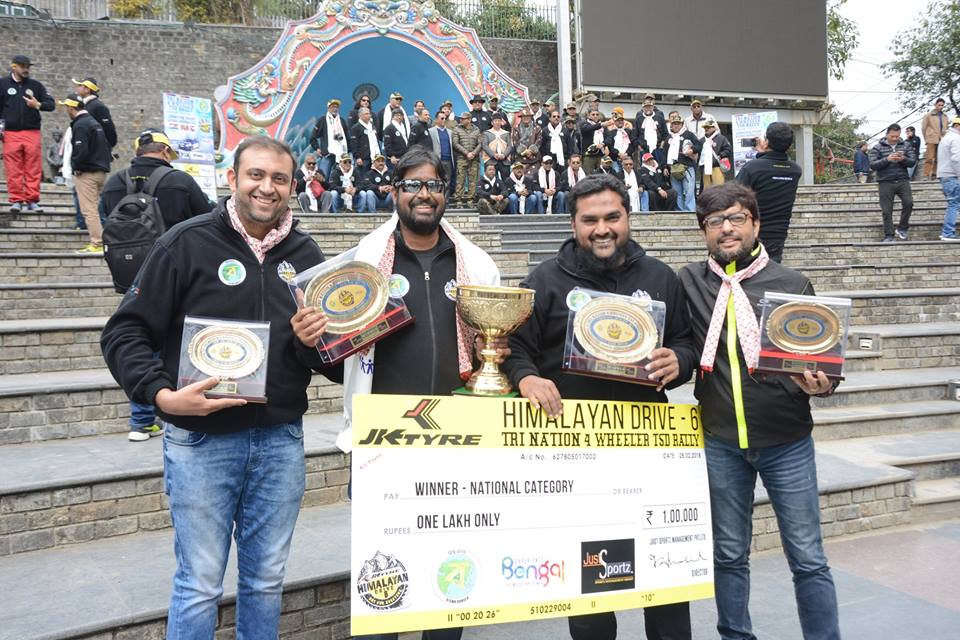 They beat the hot-in-pursuit Kolkata duo of Subir Roy and Nirav Mehta by a narrow five penalty points advantage to bring the rally to an exciting finish. The five-day event, India’s only Tri-Nation TSD (Time, Speed, Distance) rally, took 24 teams across Nepal, North Bengal and Bhutan over 1,615 tough kilometers before ending in Darjeeling.

In the last leg, the difference in scores was even closer, with the Ajgar-Musthafa team picking up 20 penalty points, just one more than Subir and Nirav. Two legs of the rally -- Leg 2 and 3 -- in Nepal were cancelled due to technical problems arising out of rallying through different time zones.

Pranjal More and Milindo Paul, also from Siliguri, finished in third position at the end of the rally with 7,006 penalty points. In the SUV category, Amit Dhanotia and Anuragh Agarwala emerged winners with 9,461 penalty points, while in the ‘Above 1300 cc category’, Pranai Rai and Nanki Kharki from Kalimpong took the title with 11,124 penalty points. Another Kalimpong team, comprising of Bimal Kumar Poudel and Rajendra Gaire were the winners in the Under 1,300 cc category with 64,064 penalty points.

The final leg of the rally was flagged off from the Tashi Namgay Grand Hotel above Phuentsholing in Bhutan on Tuesday morning. The teams crossed into India at Jaigaon and drove past the Jaldapara National Park, which is home to the Royal Bengal Tigers, one-horned rhinos, bisons and elephants, the Binnaguri army cantonment and to Murti, from where the competitive zone started.

The rally then hit the hills and passed through Samsing, Gorubathan, Lava and the charming hill station of Kalimpong where they had lunch and then continued through the steep, tea bush-covered hills of Peshoke to reach Darjeeling in the evening through Jorebungalow. They covered nearly 250 kilometers, of which the competitive section covered 180 kilometers.

The scenic and iconic Mall in Darjeeling provided the perfect setting for the prize distribution ceremony. The Himalayan Drive 6 champions Ajgar Ali and Mohammed Musthafa received a cheque worth Rs 1 lakh; the runners-up got Rs 50,000 while the third-placed Rs 25,000.