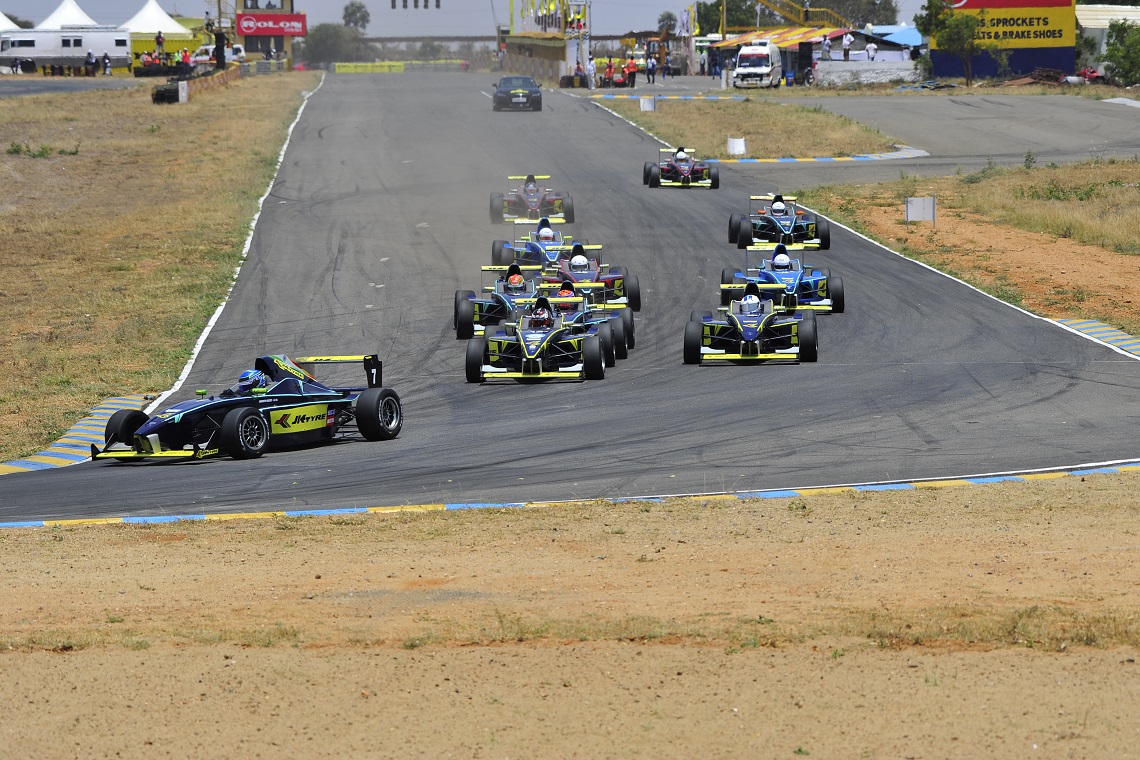 Coimbatore,  10th Sept 2016:: On a day of surprises and close battles, Ananth Shanmugham and Vishnu Prasad emerged comfortable victors in the Euro JK 16 and LGB Formula 4 races in the second round of the 19th JK Tyre-FMSCI National Racing Championship here at the Kari Motor Speedway on Saturday.

Championship leader in the JK Touring Cars category Ashish Ramaswamy, however, brooked no challenge and galloped to his third straight win in as many races so far.

The first day of the race weekend, however, began on expected lines, with Nayan Chatterjee taking the pole position in the Euro JK 16. Bitter rival Ricky Donison took the third place, setting the stage for a juicy showdown. But neither had accounted for Ananth, who seemed innocently sandwiched in between them.

Ananth, however, had his own plans and showed his intentions and aggression right away, shooting past Nayan at the lights itself. Nayan almost seemed to freeze Anindith Reddy too jumped ahead of him even though it was quite apparent that he had made a false start. By the time he recovered from the shock, Ananth had picked up a huge gap.

Nayan put up a brave fight but just couldn’t find a way past Ananth. He had to settle for the third position while Mohammmed Nalwalla and Dhruv Mohite (both of Maharashtra) took the fourth and fifth places.

There was barely any change in positions in the second Euro JK 16 Race either, with Ananth, Karthik and Nayan finishing in exactly the same positions: first, second and third.

“I got a very bad start and was lucky not to lose more pace” explained Ananth, after winning the afternoon race. He had even conceded the lead to Karthik in the opening lap itself but found some space to reclaim his position by the second lap. “I picked up a huge gap midway through the race and had my heart in my mouth when the safety car came out,” he conceded.

Luckily for him, the track was cleared of danger quickly enough and didn’t hurt him. The unfortunate driver was Donison whose car went out of control and took a sharp spin. He didn’t throw in the towel though and valiantly finished the race, even if he was more than half a lap behind.

Ananth was amazingly quick all through the two races, even timing a special 1:00.874 minutes in the 12th lap of the second race.

In the LGB Formula 4, Chennai’s drivers effected a clean sweep, taking the first three positions and also the fifth in a hard-fought, thrilling race. Lanky Vishnu Prasad of Meco Racing, who was nursing an injury, looked in no discomfort behind the wheel and put up a fast and furious show. Starting at No. 2 in the grid behind Ashwin Sundar of Dark Don Racing, he didn’t have to wait long to jump into the lead.

He timed a spectacular lap of 1:11.764 minutes in the fourth to show that he meant business. He kept up the pace all the way through till the end to comfortably win the day’s race in this category. Ashwin began on pole position but didn’t look comfortable, with championship leader Rohit Khanna breathing down his neck.

He allowed Rohit, his teammate at Dark Don, to shoot ahead of him at least twice. But in the end, Ashwin held on to his nerve and reclaimed the lead in the 12th lap to comfortably take the second position in the race. The third place saw a surprise, with Raghul Rangaswami of Meco beating down the challenge of Rohit in a rather easy overtaking manoeuvre.

In the JK Touring Cars, Ashish Ramaswamy of Red Rooster Performa won from start to finish on Saturdayafternoon. He was followed by teammate M Sivaramakrishnan and Radha Selvaraj of RAD Racing. got a fantastic car… we had a strategy and stuck to it.