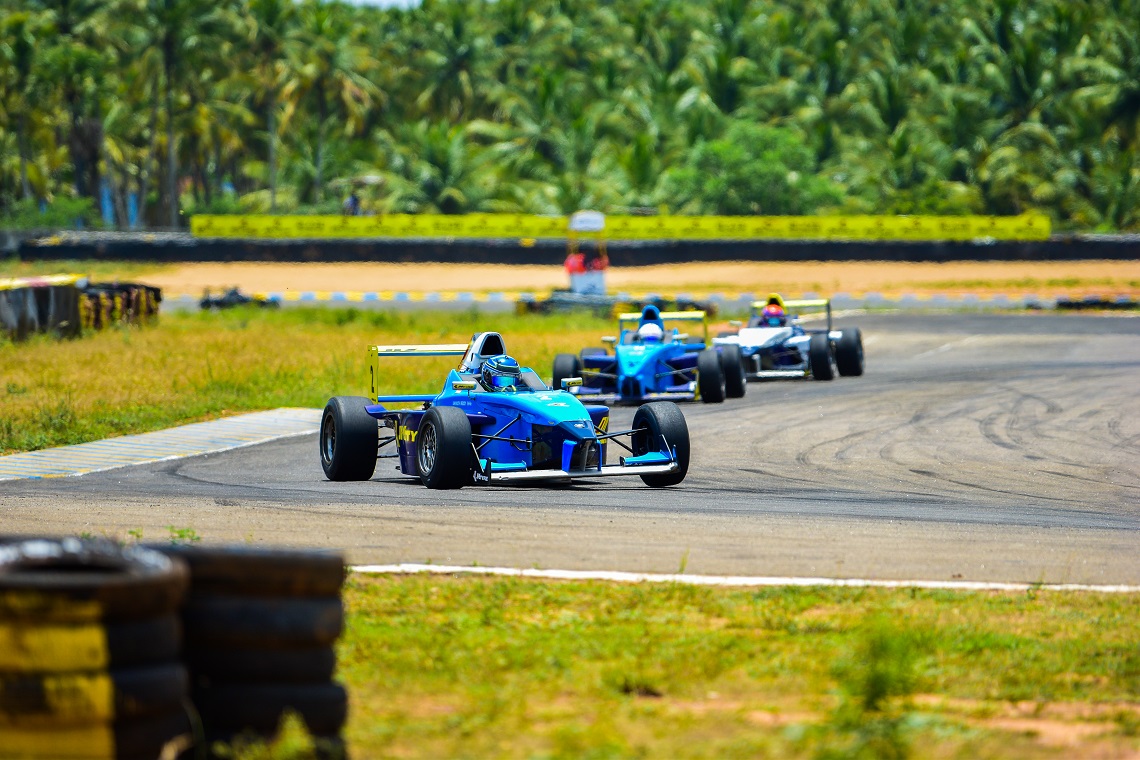 Coimbatore,3rd September 2017:On a day of upsets, Hyderabad’s Anindith Reddy opened up a sizeable lead in the Euro JK 17 while Diljith TS scored a grand double in the LGB Formula 4 in the 20th JK Tyre FMSCI National Racing Championship 2017 here at the Kari Motor Speedway.

Championship leaders Joseph Mathew (Suzuki Gixxer Cup) and Lalhruaizela (Red Bull Road to Rookies Cup), however, suffered their first defeats in three rounds; they still managed to hang on to their positions on the leaderboard though.

Chennai’s Joseph was upstaged by Aizawl’s Malsawmdawngliana and Ahmedabad’s Sachin Chaudhary to take the third position. He is still comfortably ahead in the championship battle with 56 points in his kitty, a neat 17 points ahead of the field.

Mizoram's Lalhruaizela fell behind his state mate Lalnunsanga early in the race; he simply failed to find a way past him or the unbeaten Sri Lankan, Jaden Gunawardena thereafter.

Lalhruaizela was still left smiling though as he had already booked his all-expenses paid trip to Spain for the prestigious Road to MotoGP qualifiers in October. He collected a grand total of 56 points while Lalnunsanga had 46 points.

The day’s show was, however, stolen by Anindith Reddy. He collected 18 points in his usual emphatic way, adding 18 points to his 15 from Saturday. That took him to 96 points before the grand finale at the BIC in November.

His main contender Vishnu Prasad, the leader after Round 2, made up for a disastrous Saturday that saw him DNF in both the races. He too collected 18 points, coming second in the day’s first race and winning the second. But he is lagging behind by 14 points and will need a near miracle to topple Anindith Reddy.

The LGB Formula 4 was equally exciting, with Diljith TS of Dark Don Racing proving to be a class apart. He took full advantage of the reverse grid that came into play on Sunday to win both the races. He started from pole in Race 1 and fought hard to win the race.

He was dominant in the second, not allowing anybody a chance to gatecrash into his party.

Overnight leader Chittesh Mandody, who forced a grand victory on Saturday, couldn’t overcome the handicap of the reverse grid and had to make do with the fourth position in the opening race. In the second too, he managed the fifth place to wrap up his weekend with 19 points.

It was enough to take his tally to 61 to open a handy 8-point lead over Prasad. Prasad, who had started the weekend on par with Chittesh at 42 points, couldn’t even finish in the morning for an ominous start. He fought his way to fourth place in the second for a sum of 11 points. He is now 8 points behind the leader.

The victor, Diljith, however, is still way behind on the leaderboard. He only has 29 points in his bag, having begun the round with just 8 points.