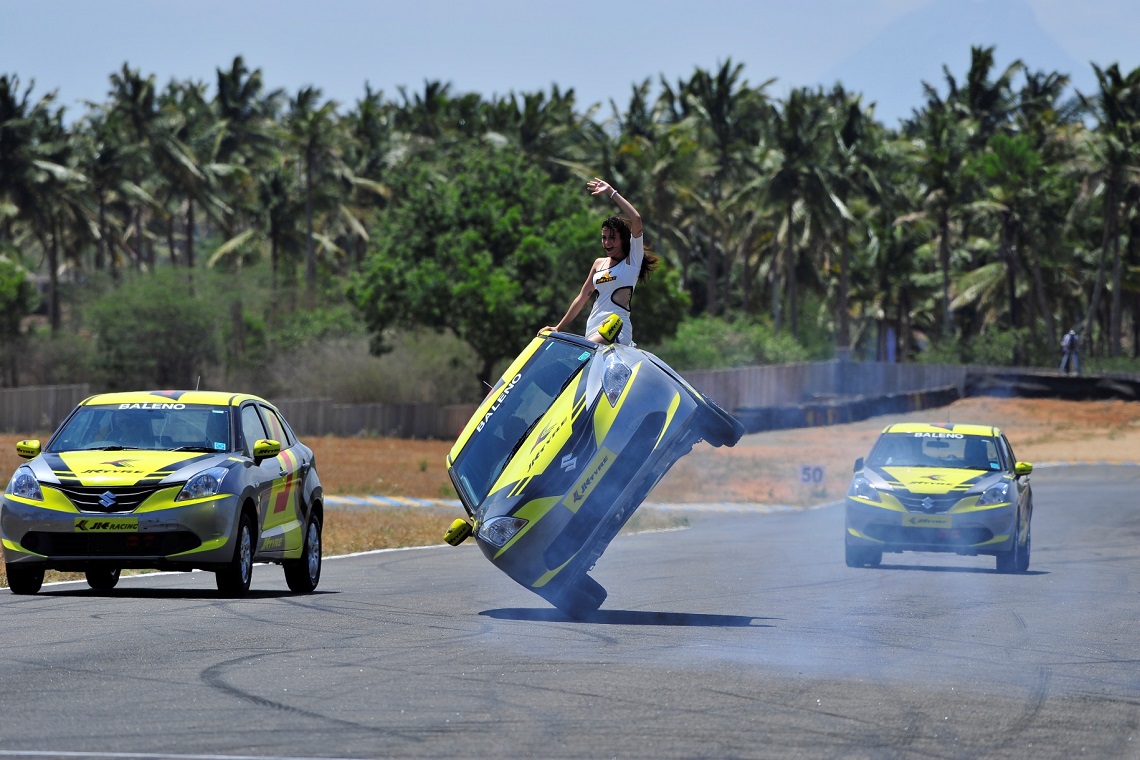 Coimbatore, 09th Oct 2016:: On a day that internationally renowned stunt driver Terry Grant dazzled Coimbatore’s racing fans, Anindith Reddy of Hyderabad emerged as a star himself, springing to the top of the ladder in the Euro JK 16 event at the 19th JK Tyre-FMSCI National Racing Championship here on Sunday. He now shares the lead with Ananth Shanmugam in the tussle for the title with 76 points.

LGB Formula 4 racer Vishnu Prasad and JK Touring Cars star Asish Ramaswamy too made it a special weekend for themselves by winning all their races over the two days and consolidating their championship positions.

The day however belonged to world record holder Terry, who along with India’s own heroes Hari Singh, Rohitaaz Singh and Sunny Kumar, unveiled a series of stunts that had the fully packed Kari Motor Speedway arena screaming for more. The UK stuntman effortlessly tilted his car and drove on only the two right side wheels that looks impossible, even funny, in movies.

A sequence of 360 degree turns, including a few around a brave female model standing on the track, left the spectators agape.

“It was amazing, especially the way the Coimbatore people responded,” Terry said later.

On the track though, it was Anindith who had the most amazing weekend, winning as many as three races to pick up a staggering 38 points. He missed out on only one race, managing a second in a thrilling race on Sundaymorning. After being unbeatable on Saturday he showed just a hint of nerves on Sunday morning, before recovering his poise to win the last race.

Bangalore’s Ananth added 28 points to his kitty to turn the Euro JK 16 into a three-way fight for the title. Nayan Chatterjee, the overnight leader, is at third place with 73 points, just three adrift of the current champions. Mumbai’s Nayan managed only three fourth-place finishes to garner just 15 points in Round 3. His car slowly wilted away as the weekend unravelled, eventually failing to even finish the last race.

Vishnu of Meco Racing, who has been in impeccable form over the weekend, completed a hat-trick of victories by adding the two LGB races on Sunday to his earlier conquests. He is on 66 points in the championship race now, perhaps just one win away in the final round.

Chennai’s Vishnu comfortably won the day’s opening race but had to be at his defensive best to pull it off in the second one. Raghul Rangasamy, also of Meco, pushed him all the way till the end, crossing the chequered flag just .023 seconds behind him. Raghul took the third place in the morning race for a cumulative tally of 51 points. He added a cool 22 points over the weekend.

Saran Vikram of Privateer and Rohit Khanna of Dark Don Racing are on third and fourth places with 37 and 35 points respectively.

Asish Ramaswamy of Red Rooster Performance, who had already pocketed the JK Touring Cars title on Saturday, maintained his winning streak to underline his supremacy. The Bangalore racer has amazingly won all six races in his category to be sitting on a unsurpassable tally of 120 points.