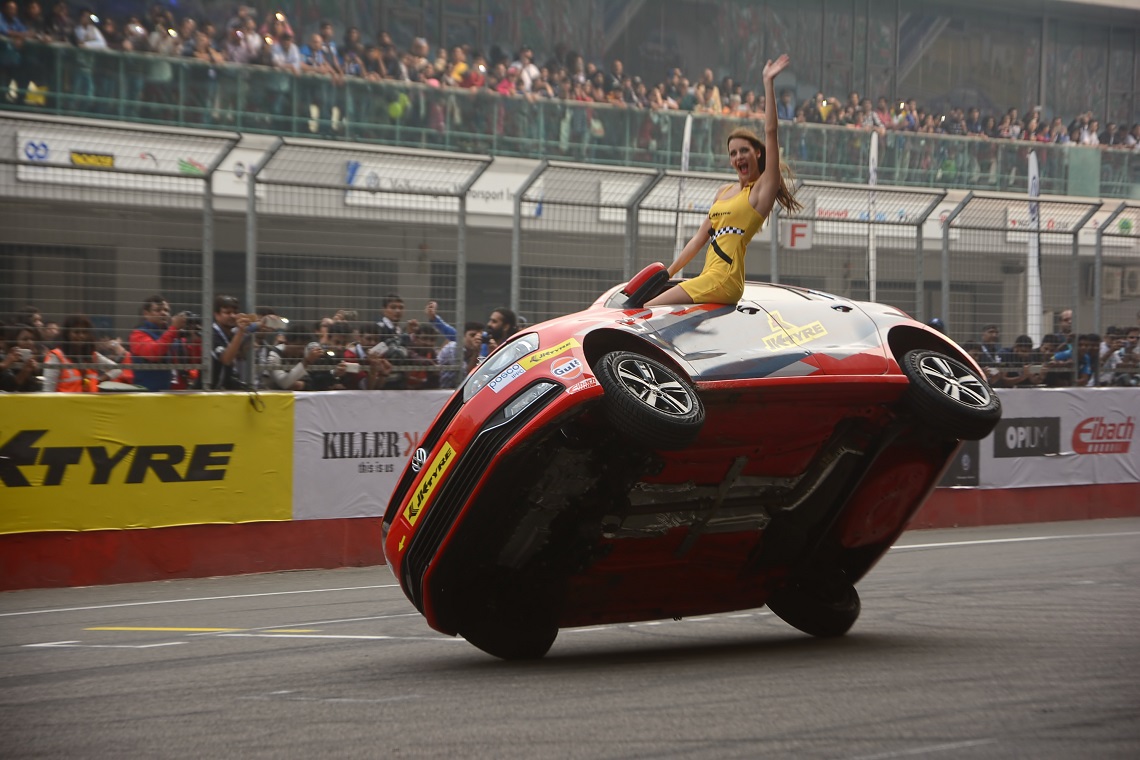 Coimbatore, 08th Oct 2016:: Hyderabad’s Anindith Reddy threw the Euro JK 16 championship battle wide open by winning both his races in the third and penultimate round of the 19th JK Tyre-FMSCI National Racing Championship here at the Kari Motor Speedway on the first day of the race weekend.

There were no such surprises in LGB Formula 4 and JK Touring Cars, with race leaders Vishnu Prasad and Asish Ramaswamy winning their respective categories as expected.

Twenty-six-year-old Anindith exhibited pace, skill and determination all through the day, jumping to number three in the tussle for the Euro JK 16 crown. He has 58 points now and two more races to go through on Sunday to set himself up for striking gold in final round at the Buddh International Circuit next month.

He began on the wrong foot in the qualifying rounds, though, beaten to the pole by Mohammed Nalwalla. But he was quick to assert his supremacy, romping home in 15:47.319 minutes in the opening race.

Anindith was equally sublime in the second race, picking up the maximum points once again to add 20 points in his kitty to make up for a disastrous second round. He had collected just five points during that weekend that saw him slide from number one to four.

“I decided to play it safe in the first lap after what happened in the last round,” Anindith said, flashing a sheepish grin. “It was just a question of being consistent in the rest of the race,” he added.

Ananth Shanmugam of Bangalore and Nalwalla of Mumbai grabbed the second and third positions in both the races. Ananth held on to his number two position, at 64 points, while Nalwalla remains way behind at 29. Dhruv Mohite is at fourth with 44 points.

The Euro JK 16 leader continues to be Nayan Chatterjee, despite having a quiet day. The Mumbai lad finished fourth in both his races. He has a cumulative total of 68 points, still 4 ahead of Ananth. Sunday is going to be a crucial day for the three front-runners, and an exciting one for spectators.

In the LGB Formula 4, Chennai’s Vishnu Prasad took one step closer towards the title by winning his race comfortably. He started at P2 after being upstaged by Saran Tmars in the qualifying rounds in the morning. But that didn’t deter him and he stormed into the lead in the fourth lap, clocking the fastest lap of the day: 1:11.824 minutes.

Saran of Privateer was overtaken by the other main contenders too, Raghul Rangasamy (Meco), with 37 points now, and Rohit Khanna (Dark Don), with 21, to keep the championship open till the final round.

In the JK Touring Cars too, there was a minor upset in the morning, when overwhelming favourite and leader Asish Ramaswamy was beaten to second place in the qualifying rounds. Deepak Chinnappa of Race Concepts, of Bangalore like Ashish, took the pole by clocking the fastest lap, at 1:11.456 minutes, in the morning.

That was, however, not enough to help him pull off what would have been a sensational upset. Asish of Red Rooster Performance quickly reclaimed his pre-eminent position at the top of the ladder with 100 points, and along it with the title. Deepak had to settle for the second place but only after he gave Asish a run for his money. Local hero Vijay Kumar B took the third place.