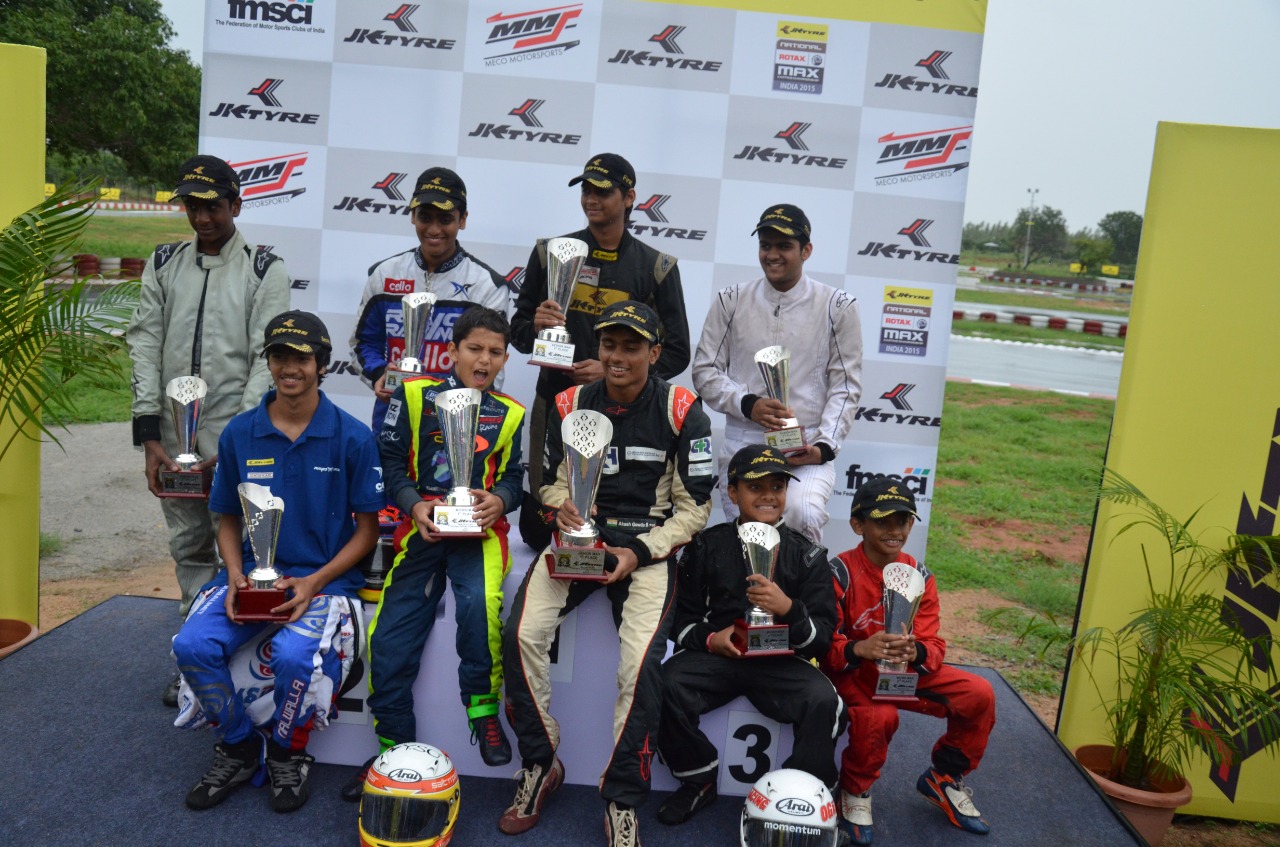 It was a wet race on Day 2 as it rained throughout the day making the track conditions even more challenging for the competitors. The day started off with warm-up races followed by the pre-finals & final races of each category namely Micro Max, Junior Max & Senior Max.

The pre-finals race in the Micro Max category saw Shahan Ali Mohsin from Agra dominating the race from get-go. Shahan had an untroubled run throughout the race and he built an early lead starting from the pole position and maintained it to the finish line. Finishing in second was Nikhil Bohra from Bangalore fom Team Meco Racing and Arjun Nair from Bangaore finished in the third place.

In the Junior Max pre-finals, Mohammed Nallwala outpaced Akrash Gowda who was in the pole position in the start of the race. Yash Aradhya who gave a tough fight to Mohammed had to settle in for a second place. Nirmal Umashanker from Chennai who started in the sixth place drove brilliantly and finished in third.

The pre-finals race in the Senior Max category witnessed the maximum action. Ameya who was leading the pack in the initial few laps fell back to the fifth place given the tough competition by Nayan who was in the attacking mode today. It was a close fight between Nayan and Dhruv Mohite but Nayan finally managed to outbreak the pack and maintained his lead. Vishnu Prasad who was disqualified yesterday started from the fifth place and finsihed third in the race.

Shahan Ali Mohsin continued to dominate the category in the final race and clinced the number one position. Nikhil Bohra could barely hold his second place and had to make way for Ruhaan Alva. Ruhaan who had started the race in the fourth place managed his way up in the race and finished second ahead of Arjun Nair.

The Junior max race was bitterly contested as pole sitter Mohamed Nallwala could not hold his first place for long in the 18 laps race. Bangalore lad Akash Gowda fought hard and took away the chequered flag ahead of Mohammed. Nirmal Umashaner from from Chennai overtook Yash Aradhya and finshed third.

The drivers in the Senior Max cateogry fought tooth and nail from start to finish. Nayan lead most part of the race but the fight got down to the wire in the last two laps when Vishnu made a fine move in one of the corners and overtook Nayan. Vishnu kept his lead till the finish. Kolhapur boy Dhruv Mohite gave Nayan a tough fight and drove his way to a third place finish.

The top three winners of each category were awarded in the podium ceremony which was held after all the races.The 12th JK Tyre-FMSCI Rotax National Karting Championship wiill come back to Hyderabad for its second round which is scheduled from July 25-26, 2015 at the Chicane Circuit.