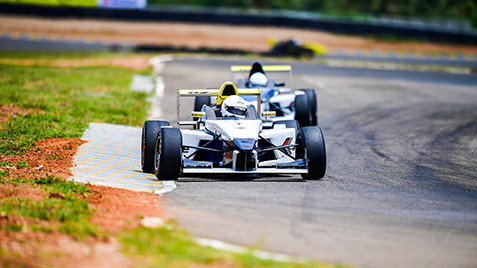 Coimbatore, August 31: The Chennai trio of Ashwin Datta, Vishnu Prasad and Joseph Matthew will aim to consolidate their positions at the top of the leaderboard as the curtain goes up on Round 2 of the 21st JK Tyre FMSCI National Racing Championship here on Saturday.

Ashwin Datta, who surprised the field by nosing ahead in Round 1 of the blue riband Euro JK 18 event despite not winning a single race, will hope to rectify that. He was very consistent though, managing three podium finishes to garner 24 points.

Sri Lanka's Brayan Perera and Karthik Tharani, however, are just one point adrift (at 23 points) and will hope to dismantle Ashwin from the top. They won two races each but also finished fifth and sixth in the other two to slide down the table.

Mumbai's Nayan Chatterjee will also be pushing hard to prove his class. He suffered an early setback as his car forced him to pull out in the season’s first race. He made up in the last three races to add 20 points into his kitty and he will be eager to fire in this round.

"It was a great opening round and it did throw some surprises. I am sure the teams and drivers are raring to go and we look forward to another exhilarating round of racing," Sanjay Sharma, head of JK Tyre Motorsports, said.

Chennai's Vishnu Prasad was imperious in the LGB Formula 4, sweeping 22 points in the three races. He, however, will be feeling the heat as his buddy Raghul Rangasamy is just one point behind him.

The LGB class will again be the cynosure of all eyes, with the Ahura girls creating a buzz with their presence. The six ladies, who had been selected after a nation-wide hunt, gave a good account of themselves too, finishing all their races with elan.

Led by film actress Manisha Kelkar, they have been training hard at the Kari Motor Speedway since the week began and will be keen to led their brigade into the Top 10.

Joseph Mathew, who won both his JK Tyre Suzuki Gixxer Cup races in Round 1 easily, will be the rider to catch once again.

Similarly, in the Red Bull Road to Rookies, Mizoram's Zothanmawia won both his races to launch his campaign on a high note. His city-mates PC Andy Lalhmangaihsanga and Jerome Vanlalrengpuia are 6 points behind, at 14, setting the stage for an exciting weekend.

Round 2 of the JKNRC will see the introduction of a new class, the JK Tyre Novice Cup, giving youngsters another platform to sharpen their racing skills.

Provisional Results After Round 1