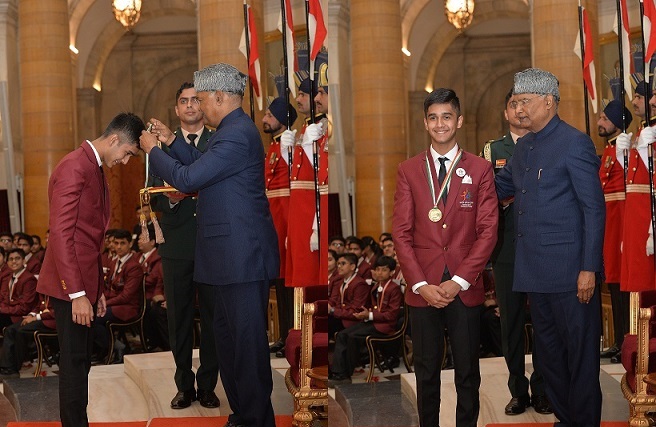 The 17-year-old, who has been scorching race tracks ever since he turned 9, has 13 Championship wins, including over 65 podium finishes and 12 awards, to his credit.
The Pradhan Mantri Rashtriya Bal Puruskar is India’s highest civilian honor bestowed upon exceptional students from various fields under the age of 18. Yash, along with the 48 other talented kids who have been hand-picked by an elite panel set up by the Union Ministry of Women and Child Development, will also meet the Prime Minister before they take part in the Republic Day Parade on January 26.

“I thank the Government of India for considering me worthy of this award and humbly accept it. It is a great honour to receive the award from the Honorable President of India and to meet the Honorable Prime Minister of India. I have been working really hard and after attaining considerable success at both international and national circuit, it really is very gratifying to be bestowed with this recognition,” Yash said shortly after receiving the award.
“While I have had my share of success on the grid in the past few years this award will remain always special as this is not an achievement for me but for the whole fraternity. This award will inspire other young enthusiasts and they will push themselves more as they now would know that their achievement will be recognised,” he added.

Coming from a humble background and no family history in motorsports, it has been a long and tough ride for Yash. He started his career in the JK Tyre National Go-karting Championship eight years back, racing for Akbar Ebrahim’s Meco Motorsports, and has steadily moved up, eventually making it to Formula Racing.

He has taken part in international championships too, including the CIK FIA Academy Trophy in 2015 in Spain, Belgium and France. He was also nominated by FMSCI to represent India in the Rotax World Finals in 2017 to race in Portugal. In 2019, took part in the FIA Motorsport Games held at Rome.

Yash debuted in the Formula-4 South East Asia Championship in the 2019 season and claimed first 2 podium finishes to underline his talent.

“Indian motorsports is enjoying a great high. First, Gaurav Gill became the first from our field to receive the Arjuna Award; and now, Yash is being felicitated with Pradhan Mantri Rashtriya Bal Puraskar Award. This is yet another great achievement for Indian motorsports and it is indeed a very proud moment for us. It feels really good to see that our hard work for over the years now is finally reaping rich dividends. Yash is a very talented driver and getting this award will definitely motivate him to reach greater heights in near future,” Mr. Sanjay Sharma, Head of Motorsports - JK Tyre, said.

“We are very thrilled with Yash’s achievement. It has taken us lot of time to get the recognition that we deserved. But now with Gaurav and Yash breaking the glass ceiling, we are hopeful that many laurels will be won by our stars and people will start taking our sport more seriously as well as garner more mainstream attention,” Mr. J Prithiviraj, President of the FMSCI said.

"Never judge a book by it's cover Is an old saying. This certainly applies to young Yash Aradhaya. If one had to observe his mannerisms when he first stepped into a kids go kart, one may not have thought that he would raise up to the occasion to put himself In a position to be nominated for this prestigious award. But If one had a careful look at his eyes and the deep rooted passion conveyed through them, one would have certainly expected him to go a long way in his motor sporting career. Coupled with the support from his family and the never say die attitude of his doting father, Yash has had the opportunity to move up the tough ladder step by step and achieve remarkable results at every step. This Is just the beginning and with strong determination from him and everyone else around him, Yash could be well on his way to making a name for himself in the International arena of professional racing," Akbar Ebrahim of Meco Motorsports and Yash' mentor said.