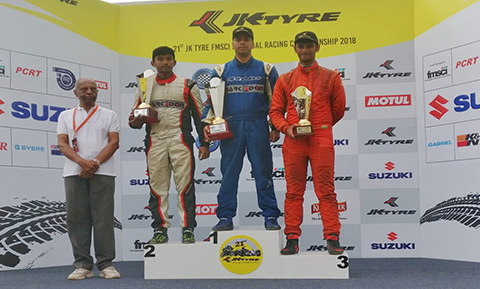 Coimbatore, October 13: On a day of great thrills and a handful of crashes, Ashwin Datta made the most of his good fortune to hang on to his Euro JK 2018 lead in the 21st JK Tyre FMSCI National Racing Championship here on Saturday.

Joseph Mathew too continued his stunning run in the Suzuki Gixxer Cup, winning his fifth straight race to widen his Championship lead further. The LGB Formula 4, however, saw a mini upset, with Delhi's Rohit Khanna (Dark Don Racing) pulling off a stunning victory.

Mumbai's Nayan Chatterjee started the day on a high note in the Euro JK 2018, claiming the pole position in a tight qualifying session. He turned out to be just 0.316 seconds faster than the field but looked set to give Ashwin a mighty fight.

But he was a tad slow off the mark in Race 1, and Karthik Tharani shot past him before the first turn itself. As if that was not enough, Nayan and Tharani got caught in a tangle midway through the race, forcing both of them off the tarmac.

Tharani managed to recover but Nayan failed to finish, losing valuable points. Ashwin Datta took advantage of the situation to streak ahead into the lead. He began from P3 but came into his own soon, clocking the fastest lap time of 1:01.422.

In Race 2, with the reverse grid for the top six coming into play, young Yash Aradhya started on pole. Yash made the most of the opportunity to build a sizable lead; but he slipped out of contention due to another minor collision.

Karthik Tharani jumped at the chance to win the race while Nayan Chatterjee, racing in a hit car, finished third to keep his Championship chances alive.

Joseph Mathew reigned supreme in the Suzuki Gixxer Cup once again, claiming another facile victory. He was followed home by Malsawmdawngliana and Sachin Chaudhary.

Rohit Khanna of Delhi made the most of his smart run in the LGB Formula 4 qualifying to win the race. It was a close race, with Sandeep Kumar finishing second just 0.285 seconds behind.

Raghul Rangasamy claimed the third place while championship leader Vishnu Prasad had to be content with the fourth place.