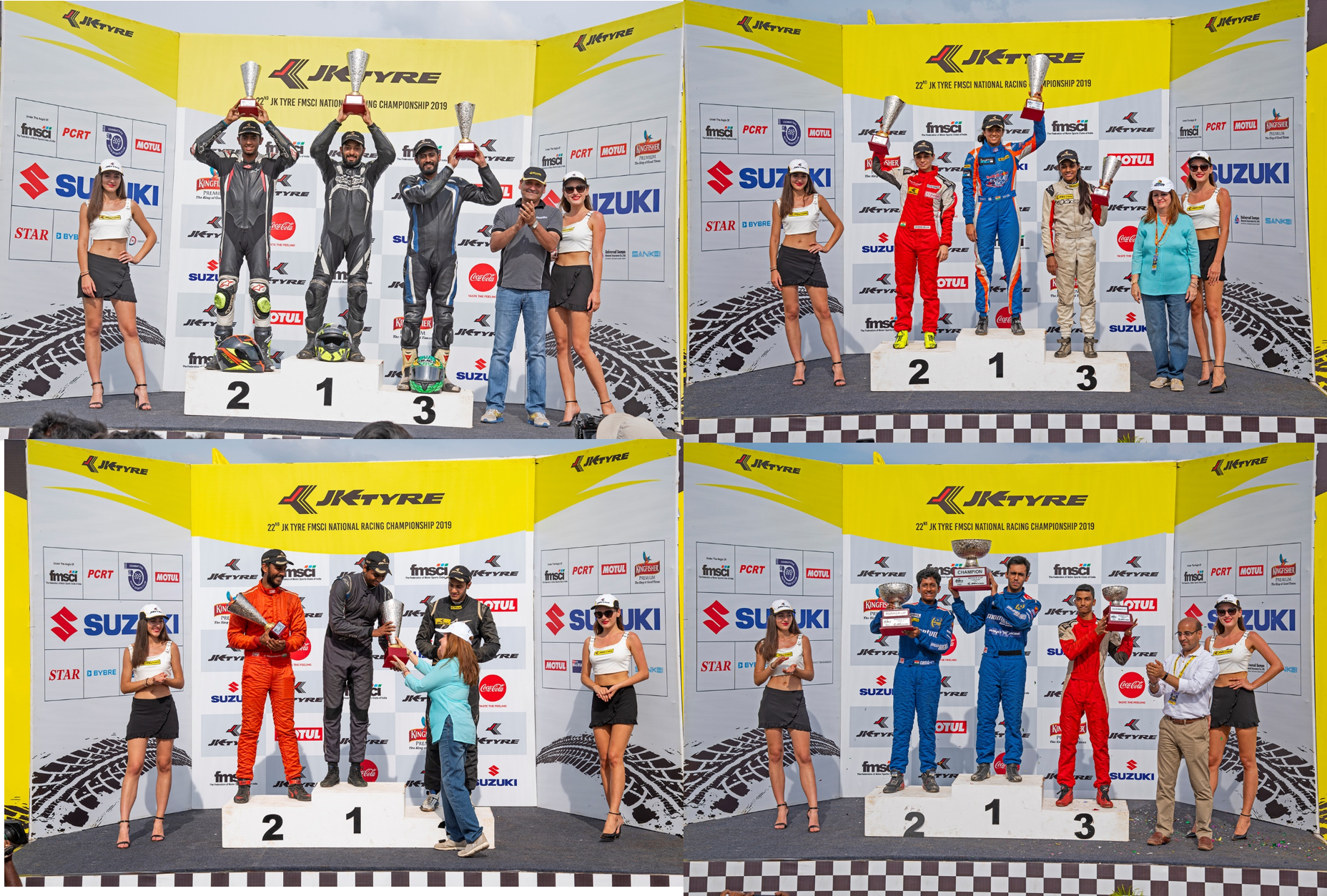 Chennai’s Vishnu, Pune’s Tanay back in lead of JKNRC
29 September 2019

Chennai’s Vishnu Prasad and Pune’s Tanay Gaikwad regained the pre-eminent positions in the JK Tyre FMSCI National Racing Championship 2019, shooting to the top of the table in their respective categories as Round 3 concluded here on Sunday.

Mumbai’s Aaroh Ravindra too stamped his authority in the championship, claiming the JK Tyre Novice Cup title that drew to a close.

MSport’s Vishnu Prasad, who didn’t enjoy the best of luck in the second round and had slipped from the top position, reasserted his supremacy, winning one race and taking the second position in the other one. In all, he collected 23 points over the weekend to become the championship leader with 68 points.

Vishnu toppled teammate Raghul Rangasamy, who picked up only 16 points to muster a total of 63 after this round. Raghul stole the second place in the final race to redeem himself but two fifth positions in the other two races held him back.

Dark Don’s Diljith TS, who began the round with a resounding win, finished sixth and fifth in Sunday’s races to hold on to his third position on the table with 48 points.

Meanwhile, Pune’s Tanay Gaikwad stormed into the lead in the JK Tyre Suzuki Gixxer Cup, wrapping up the round with a victory and a second-placed finish.

Tied on 36 points with Syed Muzammil Ali, he enjoyed a stroke of luck as Muzammil logged a DNF on Saturday. He added 8 more points on Sunday to amass 54 points for a handsome 8-point lead.

Muzammil came back strongly to win Race 2 but that was good enough to give him only 46 points. It still gives him an outside chance to win the title in the fourth and final round at the BIC in November. Siddhart Sajan held on the third position after finishing on the third podium in both the races, taking his total tally to 31 points.

Momentum Motorsports Aaroh Ravindra, who began with a 13-point advantage, showed nerves of steel to win the Novice Cup title.  He didn’t enjoy the best of Saturdays, failing to pick up a single point, thanks to a DNS and then a DNF. He, however, collected 4 points in the concluding race to corner the champion’s trophy.

Aaroh had a total of 56 points, which was good enough to pip Chirag Ghorpade (52) and Mohamed Ryan (48) in the title race.

The Momentum Motorsports driver came into the championship round with a lead of 13 points and it was expected to be a cakewalk for him. But things did not go as per the plan and he could log in a single in either of the races on day 1, which spiced up the title hunt and made it a three-way fight between him, his team-mate Chirag Ghorpade and MSport’s Mohammed Ryan on the final day.

Ryan won one race but a DNF and a 11th-place finish deprived him of the title.