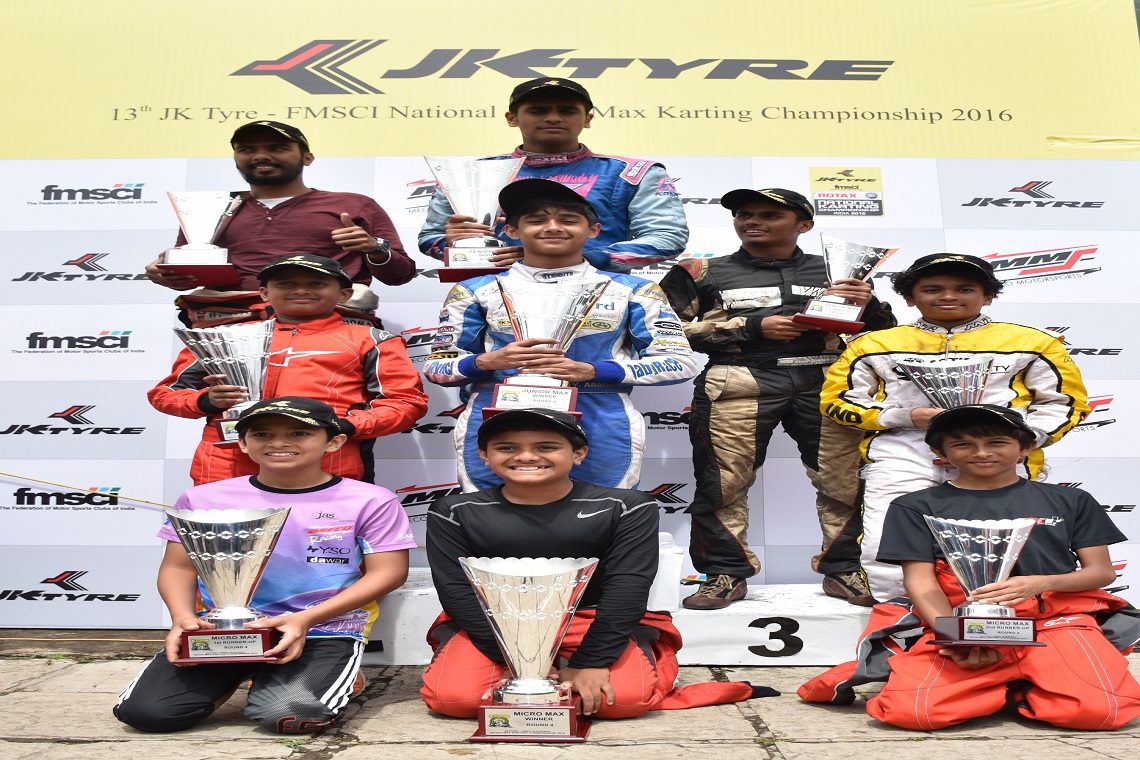 Hyderabad,  25th June 2016: Ricky Donison, Yash Aradhya and Ruhaan Alva emerged as the winners in the Senior Max, Junior Max and Micro Max categories respectively in the second round of the 13th JK Tyre-FMSCI National Rotax Karting Championship at the Chicane circuit in Leonia Resort. Right through the two days of racing, the country’s brightest karting talent provided for high-quality quality racing.

The finals of the Senior Max category produced a race to remember for Ricky Donison of BPC racing, who took a stunning victory after starting from back of the grid on account of his DNF in the pre-finals due to racing incident that saw him and Mrinal Chatterjee come together. The defending national champion from Bengaluru scythed through the entire field to take lead on the sixth lap that he maintained right to the chequred flag for his second win in this year’s JK Tyre-FMSCI National Rotax Championship.

It was also a noteworthy race for former national champion, Vishnu Prasad, who roared back to form with a fine second place finish, while Dhruv Mohite of Mohites Racing finished in third place. Earlier in the pre-finals, though Vishnu Prasad crossed the finish line ahead of Mohite and Shreyansh Jain, but he was given a one place grid penalty for tapping Mohite on the fifth lap.

In the finals of the Junior Max, Yasah Aradhya, made up for the disappointment in the first round, by clinching a fine win after leading the race from pole position. Right through the 18 lap race, his lead never came under threat. But behid him high drama prevailed in the fight for the remaining two podium places. Nirmal Umashankar of Meco Racing pulled off a series of overtaking moves to take a deserving send place finish. But for the final place on the podium, the fight between Chirag Ghorpade and Manav Sharma boiled down to the last few corners. Finally, going into turn four, Ghorpade seized upon the slightest of opening that Sharma provided to take a satisfying third place.

Capitalising on the good work in the heats, Yash Aradhya of Meco Racing, took his first victory of the season in the pre-finals of the Junior Max class ahead of Manav Sharma of Rayo Racing and Paul T Francis also of Meco Racing.

The final race of the Micro Max category, turned out to be real thriller. Ruhaan Alva, after messing up the start that saw him falling back to fifth place, drove a race of his life. As he moved up the order, Alva carved out a series of brilliant overtaking manoeuvres. On the fourth lap, he passed the early race leader Arjun S Nair diving inside turn seven to move into lead. Once he seized the initiative, the Peregrine Racing driver opened up a healthy gap ahead of pre-finals winner, Shahan Ali Mohsin of Meco Racing. Meanwhile, Nair made the best of the situation to take the final place on the podium.

In the pre-finals of Micro Max class, Shahan Ali Mohsin made a scorching start to get back on the top of his game to take early lead. Once he got into the clean air, he kept things under control to the chequered flag. Kunal Vinod of Birel Art earned a hard fought second place, while Ruhaan Alva, who fell back after the start, had to fight hard for his hard-earned third place. The third round of the championship is now slotted to be held at the KMS circuit in Coimbatore on 15th – 17thJuly, 2016.