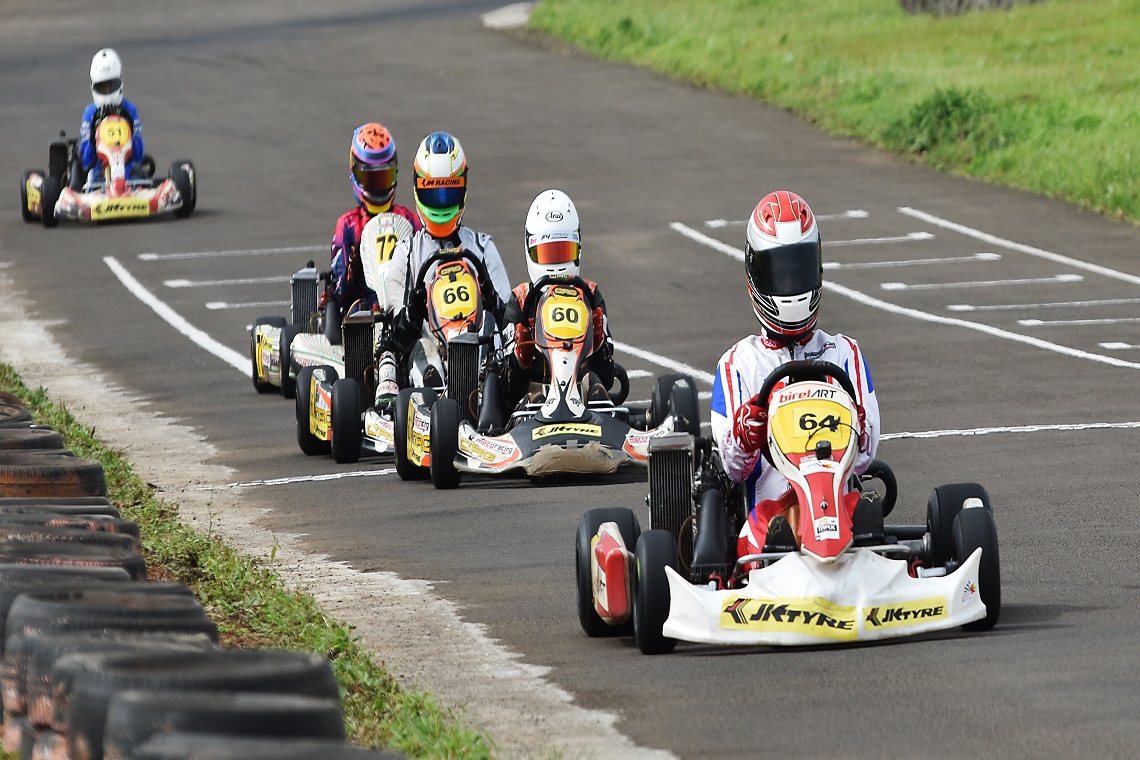 The Junior Max category saw championship leader Manav Sharma suffer a major setback, unable to start in either of the two heats with a kart problem. That allowed Chirag Ghorpade of Bangalore take pole position for Sunday, winning both his heats on Saturday.

Donison of BPC Racing, the championship leader with 252 points, was in a league of his own, winning both his heats on an action-packed day.

The Bangalore lad was in fine form right through the day, doing the fastest lap of the day in the qualifying round. He needed just 51.750 seconds to underline his form and mental fortitude to jump into. He built a huge lead in the first heat in the second lap itself and went on to win the race with an impressive timing of 13:08.349 minutes.

Local lad Dhruv Mohite (Mohite’s Racing; third with 243 points) gave his fans a lot to cheer by claiming P2, by finishing second in the first heat and third in the second heat. His effort was even more commendable as he started in the fifth position in H1 and clawed his way up steadily, taking down three determined racers in his wake. He clocked a remarkable 52.553 seconds in the tenth lap and finished the race in 13:17.138 minutes to show his familiarity with the track where he has been racing since he was a kid.

The second heat, however, saw Nayan Chatterjee of Mumbai (Meco; fifth with 229 points) outwitting Dhruv and claiming the second place. That was enough to give him P3 for Sunday. Vishnu Prasad of Chennai (Meco) took P4 while another Kolhapur racer, Krishnaraaj Mahadik taking the sixth place in the grid.

In the Junior Max category, Chirag of BPC Racing proved to be the surprise package of the day. Currently trailing at fifth place in the championship race with 231 points, he grabbed the pole position for the first heat, doing a the fastest lap in the qualifying round. That was enough to put him ahead of the pack in, both, Heat 1 and Heat 2.

His Bangalore city mate Yash Aradhya of Meco Racing finished second in the two heats to take P2. Jonathan Kuriakose of Mumbai finished third in Heat 1 and fourth in Heat 2 to take P3.

Twelve-year-old Shahan Ali won both his heats in the Micro Max rather comfortably, and might well pocket the championship in the penultimate race itself. He is comfortably ahead with 262 points and two wins on Sunday might be enough to put him beyond reach.

Shahan of Meco Racing looked relaxed in the paddock and sure of himself behind the wheel. He stormed into the lead in the qualifying round with a nippy lap of 57.479, and was virtually uncatchable all through the day. In Heat 1, he needed just 9:38.065 minutes to finish the 10 laps while he took 9:38.366 mins in the second to underline his class and pedigree.

Pune’s Aadityansh of Rayo Racing, who pulled off a surprise in the qualifying by finishing second held on to his position to take the second position. He however faded away in Heat 2, finishing sixth. Kunal Vinod of Bangalore, representing Birel Art, made a desperate charge after squandering his P3 in Heat 1, to finish a commendable second in Heat 2. That will see him start in Pole position on Sunday for the pre-finals.

Ruhaan Alva who is currently second in the championship race will have to fight hard to reclaim his position after finishing seventh and fifth in the two heats.