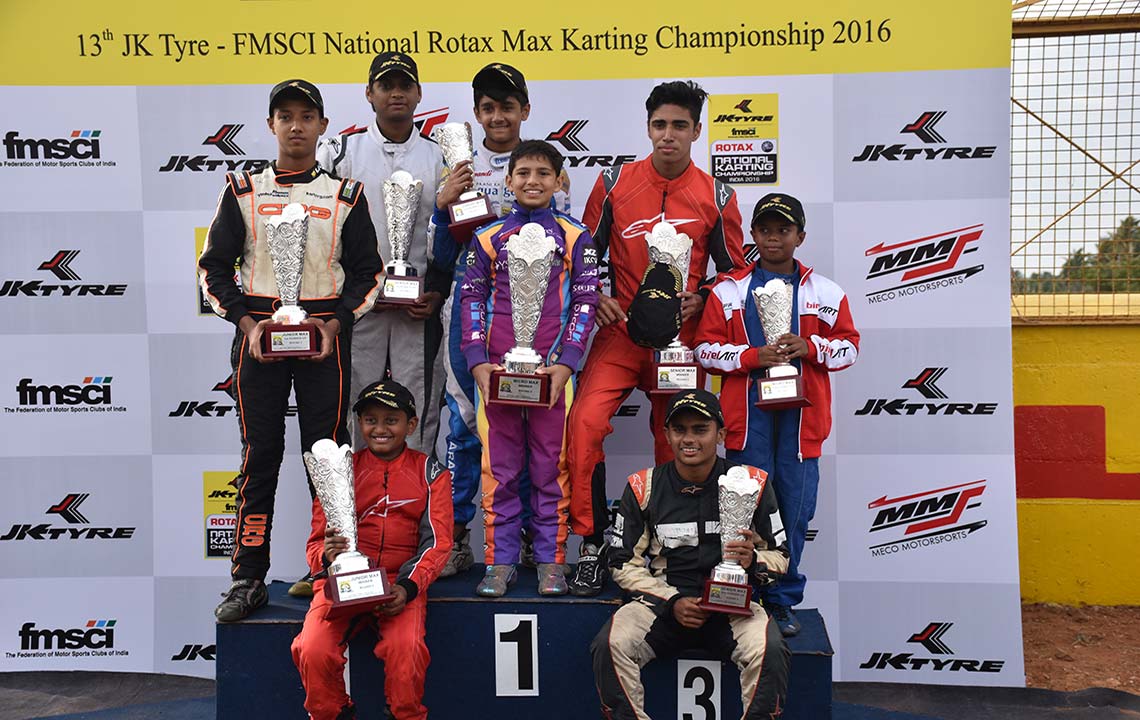 Coimbatore,  17th July 2016: Ricky Donison, Manav Sharma and Shahan Ali Mohsin consolidated their positions after the third round of the 13th JK Tyre-FMSCI National Rotax Max Championship by winning the finals in their respective categories on an action-packed Sunday here at the Kari Motor Speedway.

Donison of BPC Racing, who started at the third place in the grid for the finals, had to stave off a stiff challenge from Nayan Chatterjee (Meco Racing), Dhuv Mohite (Mohite’s Racing) and Vishnu Prasad (Meco Racing) in an intense race that saw dramatic twists and turns. It saw the top five setting a hot pace and jostling for space, exchanging positions through the first few laps before the fight fizzled out.

The victory has taken Donison’s championship tally to 252, a slender 5 points ahead of the second-placed Vishnu and 9 ahead of Dhruv. It may not seem like much but he will be pleased as at the start of the Coimbatore leg he was just a solitary point in the front. Ameya Bafna (Rayo Racing) was looking good at second place before disaster struck: he was disqualified in the finals to add to his morning woes, when he finished seventh.

Nayan, who had a brilliant run in the pre-finals to grab the pole position for the big one, couldn’t turn on the magic and slipped behind quickly before fading away midway through the race. Dhruv, who finished second in the afternoon race and looked good in the final too, couldn’t keep up the pressure and finished a disappointing sixth.

Donison looked off colour early in the afternoon but came back roaring in the race that mattered. He overtook Nayan in the second lap itself, scorching the track and finishing in 36.890 secs, the fastest of the day.

Vishnu Prasad (Meco Racing) drove smartly, staying behind the lead pack and waiting for the pace setters to lose steam. It paid dividends as Nayan and Dhruv became victims of a hotly contested race, giving him the second place.

In the Micro Max category, Shahan Ali was in his elements once again, winning both his races rather comfortably. Beginning the third round with a tiny four-point lead at 173 points, he returned home a delighted man with the championship now well within his grasp. He has 262 points in his kitty now, with Ruhaan Alva (Peregrine Racing) falling behind by 16 points after finishing fifth and sixth in his two races. Arjun Nair (Meco Racing) and Arun R (Birel Art) kept themselves in contention though, with the former grabbing the second place in one race and the latter finishing fourth in both his races.

In the Junior Max category, Chirag Ghorpade ( BPC Racing) had a great day, winning the finals and taking the third place in the pre-finals to break into the top five. Championship leader Manav enjoyed a typically good run too, finishing first in the morning race and second in the afternoon one. That was enough to give him a healthy 9-point lead in the tussle for the title. He now has 257 points to Nirmal Umashankar’s (Meco Racing) 248, who finished in the top five in both his races (fourth and second).