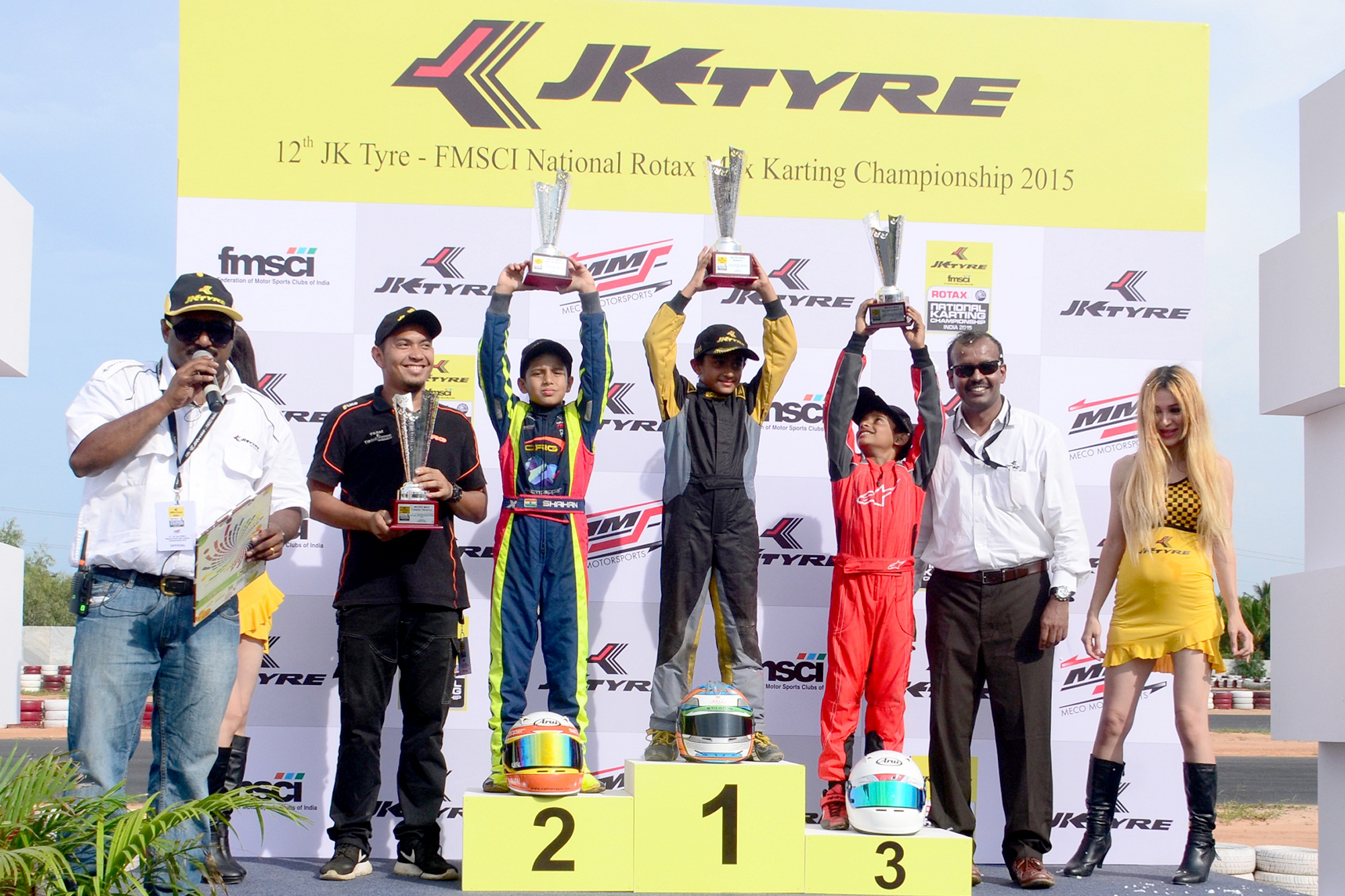 The 2015 season of the championship concluded on a hot and sunny day here in Bangalore at the newly built karting track Meco Kartopia. The last and final day of the season witnessed thousands of motorsport fans in attendance who had come from all corners to cheer for their favorite karting star. To keep the audiences entertained, there was a special bike stunt show which left the onlookers asking for more. The excitement in the atmosphere was high as the drivers geared up to give it their best shot in the last set of races for this season.

At the end of Day 1 Shahan, Manav and Ricky were leading in the Micro, Junior and Senior Max categories respectively. Day 2 started off with the pre-finals & final races of each category.

A whole lot of excitement unfolded in the pre-final race of the Micro Max category. The leader Shahan started off from pole position and kept his lead for the first ten laps. However in the second last lap, Nikhil Bohra who was closely following Shahan made his move and took the lead in the last corner and eventually took the chequered flag. Shahan had to settle in for the second place. Aditya Swaminathan who started third, used his excellent maneuvering skills and made his way to the second position in the very second lap of the race. However in a matter of time the focused Shahan whose eyes were on Nikhil overtook him. There was an intense battle between Aditya, Chirag and Ruhaan who kept charging at each other throughout the 12 laps race. The fight for the third place was a sight to watch as an interesting battle was brewing between them. On multiple occasions, Chirag made his way past Ruhaan however Aditya kept up to his pace and manage a third place finish.The final race of the Micro Max had an exciting closure. Nikhil and Shahan kept battling for the podium finish however Nikhil kept his lead and at the end of 15 laps, he finished first. Shahan tried his best to overtake but he knew that his championship title was safe even if he finished second and therefore took no chances and kept his second place secured. Ruhaan Alva extended his lead from Chirag who was constantly chasing him for the third place and ensured his third place on the podium. With this second place finish, Shahan sealed his championship title in the Micro Max category.

In the pre-final race of Junior Max, Nirmal Umashanker who started from the pole position maintained a comfortable lead from the start to finish. Following him closely was Bangalore lad Akash Gowda who ensured that he does not let go off his second place throughout the race. However, the current leader in the championship table Mohammed Nallwalla who was disqualified yesterday because of technical infringement started off in the seventh place and moved up to the third place. However in an effort to make a move on Akash Gowda, he fell behind by three positions. But he didn’t give up and after an intense battle with Yash Aradhya for third place, he overtook Yash on a tight corner in the last lap and took the third place.

In the last and final race of the Junior Max, Mohammed Nallwala was back in his form and sealed his leadership position by taking away the chequered flag ahead of everyone. Nirmal Umashanker, Akash Gowda, Manav Sharma and Yash Aradhya fought bumper to bumper for the second and third place finish. It was a clean race with no DNFs (did not finish) and at the end, Nirmal finished second and following him closely was Akash Gowda. With this third place finish, Akash Gowda sealed his championship title in the Junior Max category. As he lifted the trophy, he received a huge applause from his friends from his school who had come all the way to cheer for him.

The pre-finals of the Senior Max was closely fought. After a tough 18 laps race, Ricky Donison whose eyes were on the podium ensured he kept his lead from start to finish. The very experienced Vishnu Prasad was out of the track in corner 1 and after repeated attempts, his engine restarted and he was back in the race. With years of experience behind him, he not just managed to finish in the eighth place but also set the fastest lap of the race. Dhruv Mohite and Krishnaraj Mahadik had a close face off for second and third place till the end. When the chequered flag came out, Dhruv & Krishnaraj followed Ricky in the second and third place respectively. Ameya Bafna had a long battle for the third place but he eventually finished sixth as towards the end he lost speed.

The final race was filled with action as the young lads fought it out. Ricky was leading the race since the beginning. The real fight was between Vishnu, Nayan, Krishnaraj and Ameya who were battling it out on the track. Ricky maintaining his dominance finished the race first. Vishnu Prasad was back in his form and managed to retain his place at the second position throughout the race and clocked the second best time. Ameya who was in the third place as the race began eventually fell behind as Nayan took over and crossing the finish line third.

The winners of Round 5 were awarded in the podium ceremony held after the races. The overall champions of the 12th JK Tyre-FMSCI National Rotax Karting Championship were awarded in a glittering ceremony later in the evening. The 2015 season of JK Tyre-FMSCI National Rotax Karting Championship witnessed a lot of action and excitement and will be back next year for the 13th season of the championship.