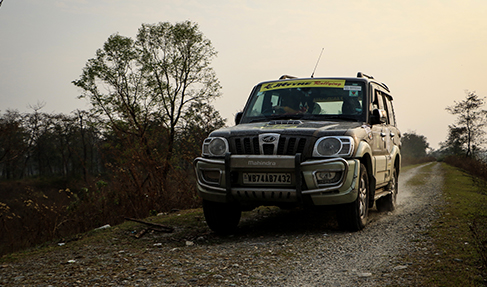 The JK Tyre Hornbill TSD Driver champion Gagan Sethi and co-driver Rajkumar Mundra, who were not in the reckoning after the initial stages, showed great precision and skill to make up for their opening day's loss and get back into the championship mix.

While there were lot of unfortunate incidents with top contenders Pratick Sirkar (& co-driver Debashish Ghosh) and Ratan Pal (& co-driver Prasenjit Roy) dropping out of contention with DNFs, it was two-defending champion Ali Asgar and his navigator Md. Musthafa who held on to their slender lead to keep their dream alive of completing a rare hat-trick.

Yogendra and his co-driver Nagarajan Thangaraj, who started their day in the second position, managed to hold on to that position, even narrowing down the lead and threatening the leaders.

With leg three of India's only multi-nation TSD (Time, Speed, Distance) from Paro (Bhutan) to Kalimpong being cancelled due to heavy snowfall, the drivers will head straight to Leg 4 which will be flag-offed from Jaigaon while the final leg  will see the competitors traverse from Kalimpong to Siliguri.

Thus, JK Tyre has conquered two steps in the motorsport program where the new racing aspirants first establish themselves in India, then graduate to Asian level i.e. to Formula BMW, which is now JKRAS and then they move to higher levels of racing. JK Tyre now stands closer to achieving its mission of bringing world-class motorsport to the Indian masses. The Racing and Karting programme by JK Tyre has been the breeding ground for the country's  motorsport talents like Narain Karthikeyan, Armaan Ebrahim, Karun Chandhok, Aditya Patel and other emerging talent.

Another pioneering initiative was the launch of the Truck Racing Championship in India in partnership with Tata Motors. The company developed &amp; designed “JetRacing”-the new generation truck racing tyres especially for this application. With this, JK Tyre became the first tyre company to produce truck racing tyres in India. The combination of the Prima trucks fitted with Jet Racing received an overwhelming response from participants and has definitely brought in a revolution in the Indian racing scenario.