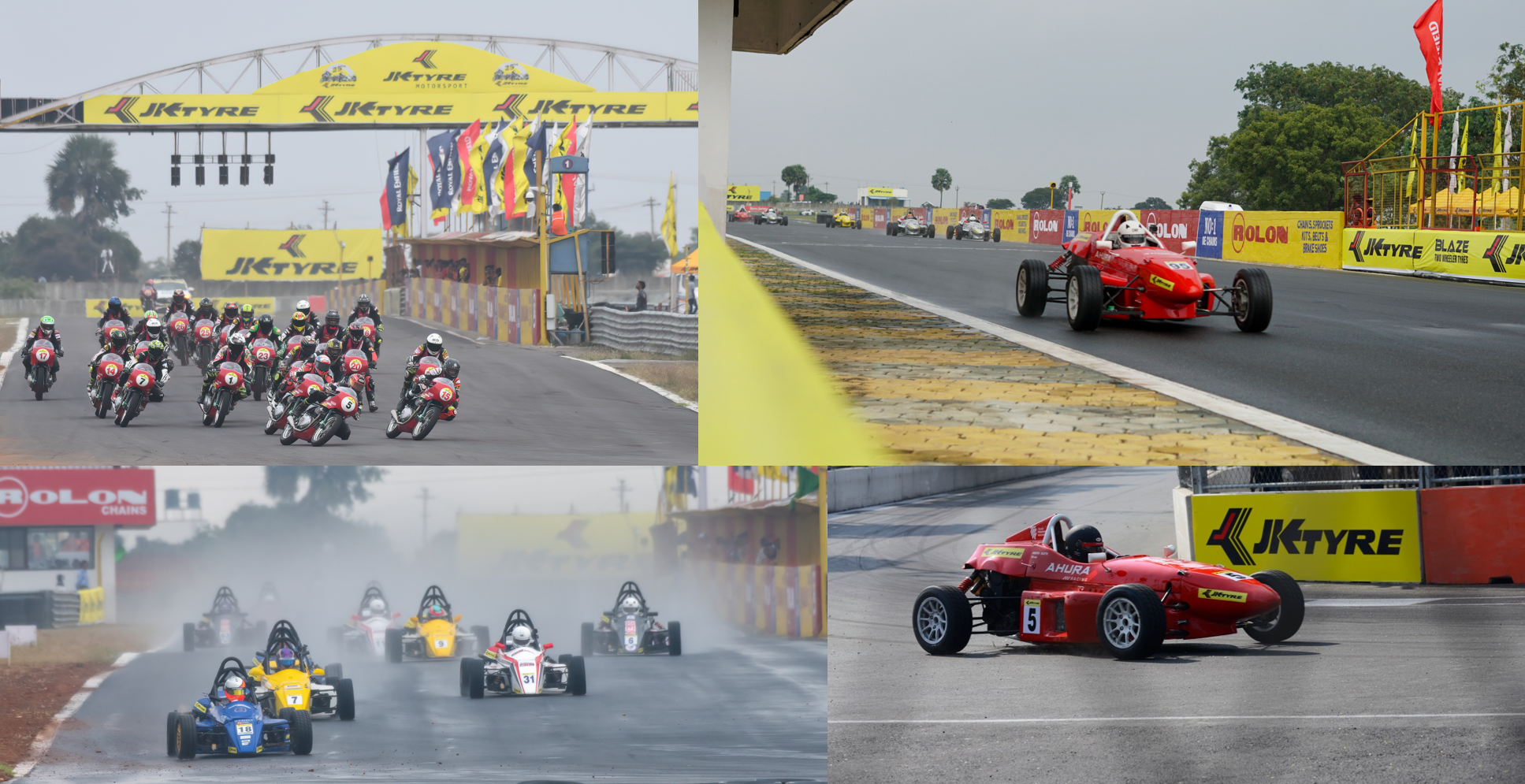 The 25th JK Tyre FMSCI National Racing Championship 2022 is heading for the final round in the familiar turf of Kari Motor Speedway, Coimbatore this weekend.

After an invigorating Round 3 with LGB Formula 4 races at the Hyderabad Street Circuit, the stakes are high as the silver jubilee edition goes down to the wire with over a hundred seasoned and rookie racers heating up the battles across LGB Formula 4, JK Tyre Novice Cup, JK Tyre presents Royal Enfield Continental GT Cup, and JK Tyre Endurance League Cup powered by United CRA.

The LGB Formula 4 this year has been full of surprises and close finishes. A neck-and-neck battle has been brewing among Ahura Racing’s Viswas Vijayaraj, Dark Don Racing’s Arya Singh, Ashwin Datta, Tijil Rao, Sandeep Kumar, and MSport’s Raghul Rangasamy, among others, from the start of the championship in September.

Ahura Racing’s Amir Sayed, and MSport’s Vishnu Prasad sitting out of the Round 3 due to their participation in the Indian Racing League, has surely given some edge to the other racers. Yet the championship category has been such that with just one wrong move or error, the whole tally changes. With such close a chance, and only 19 points separating the top four in the provisional tally after Round 3, a fierce face-off awaits the seasoned campaigners.

In the JK Tyre Novice Cup, DTS Racing’s Kyle Kumaran had an impressive start in Round 1 but had to drop places as he missed the second round due to his participation in the FIA Motorsport Games in Marseille. Momentum Motorsports’ Chetan Surineni bounced back in Round 2 with two wins to take the lead, while Hasten Performance’s Aadithya Parasuram follows with only a one-point gap. With DTS Racing’s Vinith Kumar, and MSport duo Dhruvh Goswami and Aman Nagdev following closely in the tally, only 13 points separate the top seven as they head for the final battle this weekend.

A similar scenario prevails in the Royal Enfield Continental GT Cup. The two-wheeler category saw seasoned campaigners Allwin Xavier, Navaneeth Kumar and Anish D Shetty, putting their best foot forward from Round 1. Several tumbles and nail-biting finishes have brought the leadership tally to a close with only eight points separating the top four. While Allwin leads the provisional tally in the Professional category with 34 points, Navaneeth Kumar and Anish D Shetty sit jointly with 30 points each.

The Amateur category, however, has been dominated so far by the Chennai-based racer Soorya PM. With regular podium finishes across the two rounds, he currently leads the provisional tally with 61 points to his credit. Mysore’s Varun Gowda and Bangalore-lad Pradeep C follow Soorya in the tally. The engines are up for a final roar this season with the finale action unfolding this weekend.

After the two high-octane races of the JK Tyre Endurance League Cup powered by United CRA across the two rounds, it is the pair of Abhishek Vasudev and Amarnath Menon who are leading with two successive wins to their names among a field that also features a 12-year-old FIM MiniGP champion Shreyas Hareesh, and an all-women team. The pair of Rohit Lad and Abhinav G finished second in Round 2, while Prabhu V and Sarvesh Hamunnavar came third bettering their performance from Round 1.

With the last 11 races of the coveted championship up on cards, the concluding round has many more surprises as the ultimate racing weekend unfolds.