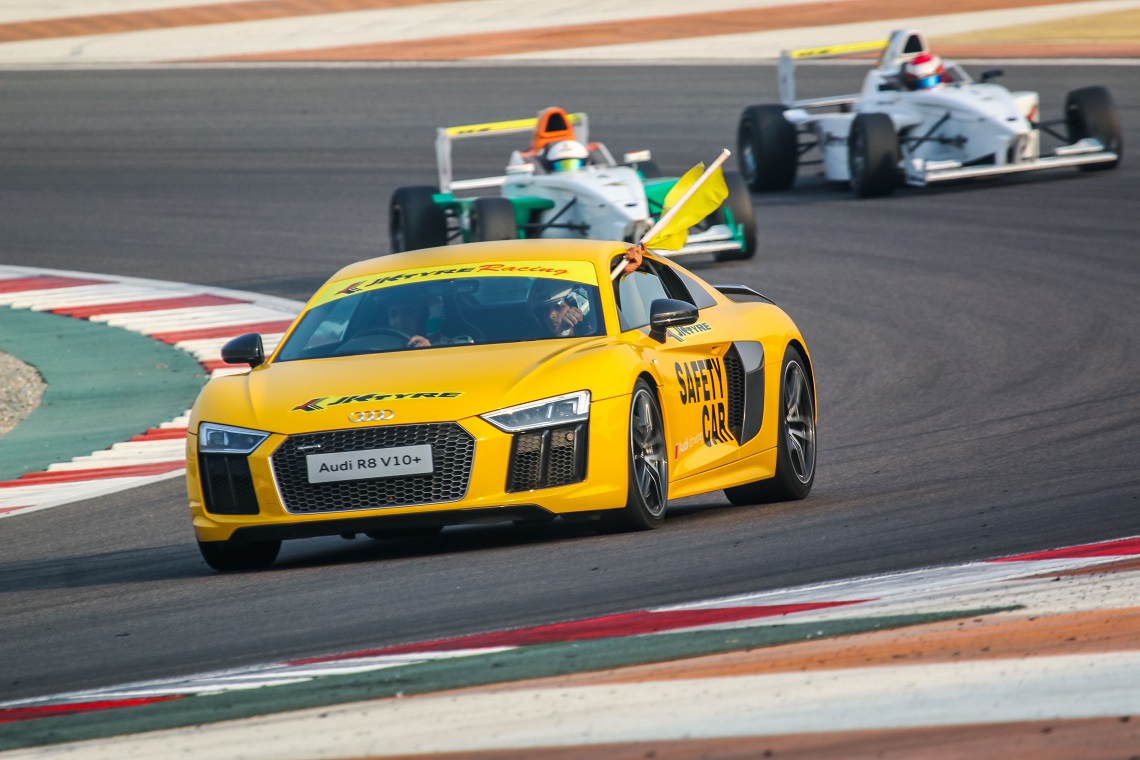 Greater Noida,  18th November 2016::The 19th JK Tyre-FMSCI National Racing Championship is poised for a scintillating finale, with speeding cars and bikes, mind-boggling stunts by world renowned performers, live music and a unique Racing Bazaar on the fare during the upcoming weekend at the iconic Buddh International Circuit here.

The Carnival of Speed that offers fast at its fastest will have United Kingdom’s Terry Grant, a 23-world record holder, as one of the star attractions with his gravity-defying acts. He will not only perform some of his well known stunts but will also unveil a couple of spectacular new routines when the action hots up on the big day on November 20.

If all this is not enough for speed fanatics, the racing itself is expected to be exhilarating in the fourth and final round, with close finishes on the cards in two of the three classic categories. The Championship also has something special for bike lovers, the JK Superbike 1000cc and the JK Superbike 600cc featuring drivers from across the country.

As many as 32 bikers from across India have confirmed their participation in the JK Superbike 1000cc category. They will all be seen setting the track on fire in their mean machines, ranging from the Honda CBR 1000rr, Kawasaki ZX 10r, Suzuki GSX R1000 to the Ducati Panigale, Yamaha R-1 and BMW S1000RR.

The race will see heavyweights like defending champion Simranjeet Singh and India’s Dileep Rogger who became India’s first Asian racer to participate in the German National Championship Endurance Race Z. Also in the fray would be former nine time national road racing champion Rajini Krishan and the only female rider in the category Dr Neharika Yadav in action during the weekend.

In the JK Superbike 600cc, 18 racers from various parts of the country will be gunning for glory. In this category, all of them will be riding the powerful Daytona 675 R.

The participants will be cheered on by India’s own racing sensations and brand ambassadors of JK Tyre Armaan Ebrahim and Aditya Patel. Also on the sidelines, racing aficionados can partake in a one-in-a-kind Racing Bazaar, where they can get their cars and bikes modified by the industry’s best technicians but also enjoy the action from much closer as well as meet and interact with Bollywood actor and MTV Roadie winner Rannvijay Singh.

The piece de resistance will of course be the Euro JK 16 clash, with three racers in contention for the coveted title. Ananth Shanmugam (Bangalore; 76 points), Anindith Reddy (Hyderabad; 76 points) and Nayan Chatterjee (Mumbai; 73 points) are literally neck to neck after the first three rounds and will surely come out all guns blazing to win the championship. All three will have to be at their sharpest and smartest with as many as four races lined up for them; with the winner picking up 10 points for a victory and the second-place finisher and third-place finisher looking at 8 and 6 points respectively, the championship shall remain alive till the last race is over. It is going to be as much about speed as about nerves this time.

There is hardly anything to choose between the three racers either: if Ananth Shanmugam has been one of the most consistent drivers so far, Anindith Reddy took a giant leap up the ladder by winning three of the four races during the penultimate round. Nayan Chatterjee, on the other hand, has exhibited maximum speed and conceded the top position only after having a disastrous weekend in the third round. Any of them is capable of pulling out something more from their BMW powered Formula 2 cars.

In the LGB Formula 4, Vishnu Prasad of Meco Racing will start as the favourite to annex the title, with a handy 15-point lead. The Chennai racer got off to a slow start in his campaign but has picked up narrow the lead.

His Meco Racing teammate Raghul Rangasamy of Chennai will have to do something spectacular while also hoping that Vishnu falters to come anywhere near the trophy. He is on 51 points and can, at the most, aspire to narrow the lead.

In the JK Touring Cars segment, Ashish Ramaswamy of Red Rooster performed consistently throughout the year. The Karnataka racer amazingly won all the races so far for a tally of 120 points. All the others have receded into the background, with Tamil Nadu driver Radha Selvarajan of Prime Racing marginally ahead with 65 points. Indeed, the battle for the other two positions on the podium can be intense, with two Tamil Nadu racers Rajaram C also of Prime Racing and Deepak Chinnappa on 61 points each.

Championship points after Round 3