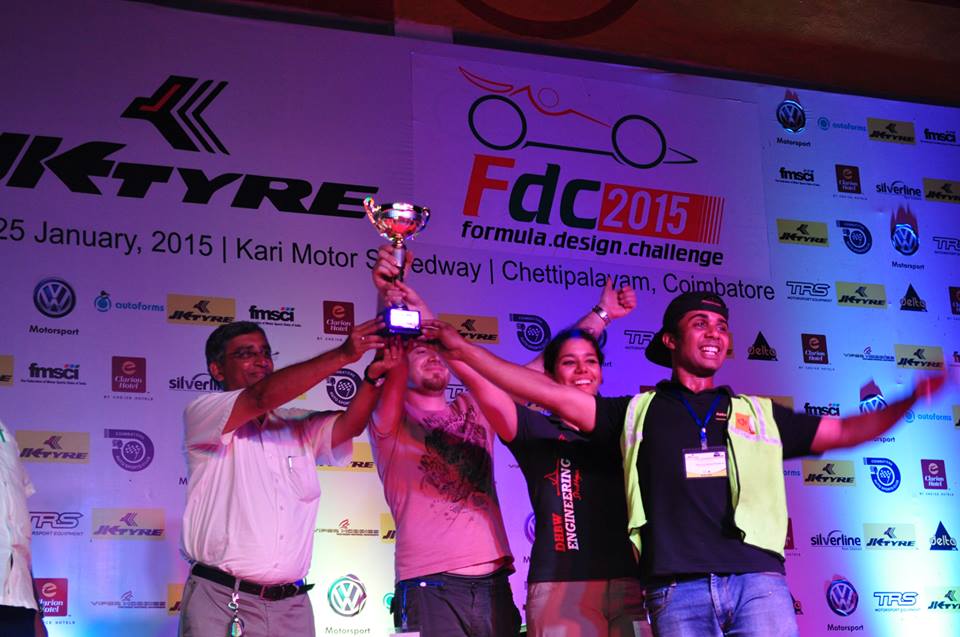 Coimbatore, India — January 25, 2015: JK Tyre Formula Design Challenge 2015 competition which started from 20th of the month, witnessed high decibel excitement, thrill and enthusiasm among the participating students, faculty members and organizers during the 6 action packed days. During these days, the venue was home to over 900 engineering students from 36 engineering colleges from across India. Their designs were evaluated by an esteemed panel, consisting of Ian Thomson, with a rich experience in the international motorsports; Maria Bonilla-Torres, System Designer for Robert Bosch GmbH and Felix Scherke, Research Engineer at Daimler.

Congratulating the winners, Mr. Sanjay Sharma, Head-Motorsport, JK Tyre & Industries Limited, said, “JK Tyre has always been at the forefront of promoting tyre research and motorsport in India. With such a large young population and engineering talent, our country has the potential to excel in the global automotive engineering scene.” “Congratulations to Team Orion Racing for their excellent team work. It is very reassuring to see such professionalism and expertise among these young engineers. They surely have a bright future ahead,” he added.

As the winners, members of Team Orion Racing will get an opportunity to spend a day with JK Tyre’s race engineers during one of the JK Tyre race weekends. This will give them real time experience of what goes in a race pit.

“JK Tyre Formula Design Challenge 2015' has seen immense enthusiasm among the Indian student community. Despite it being the first year, we have seen some great designs from all teams. We are thankful to JK Tyre and everyone who supported us to make the initiative a success,” said Soumya Kanti Bose, convener, JK Tyre Formula Design Challenge 2015.

The last two days of FDC saw the temperatures rising with close encounters among the teams across the three key events namely, the Auto Cross, Skid Pad and Endurance test on the last day. On the final day, the flagship event, the Endurance event declared KJ Somaiya as the first JK Tyre Formula Design Challenge winner.

JK TYRE FDC 2015 was organised by Delta Inc., which is run by B.Tech/ BE alumni from engineering colleges across India including the IITs. After being shortlisted over the year, the final 36 teams underwent various static inspections and competitions in the Design, Business and Cost Events.

The core team of ‘JK Tyre Formula Design Challenge 2015' adhered to stringent international guidelines. It made sure that all safety measures were followed by the participants while designing the cars and also during testing phase. The competition has experienced global experts from across Automotive Design, Manufacturing and Business fields to judge the prototypes by the students.