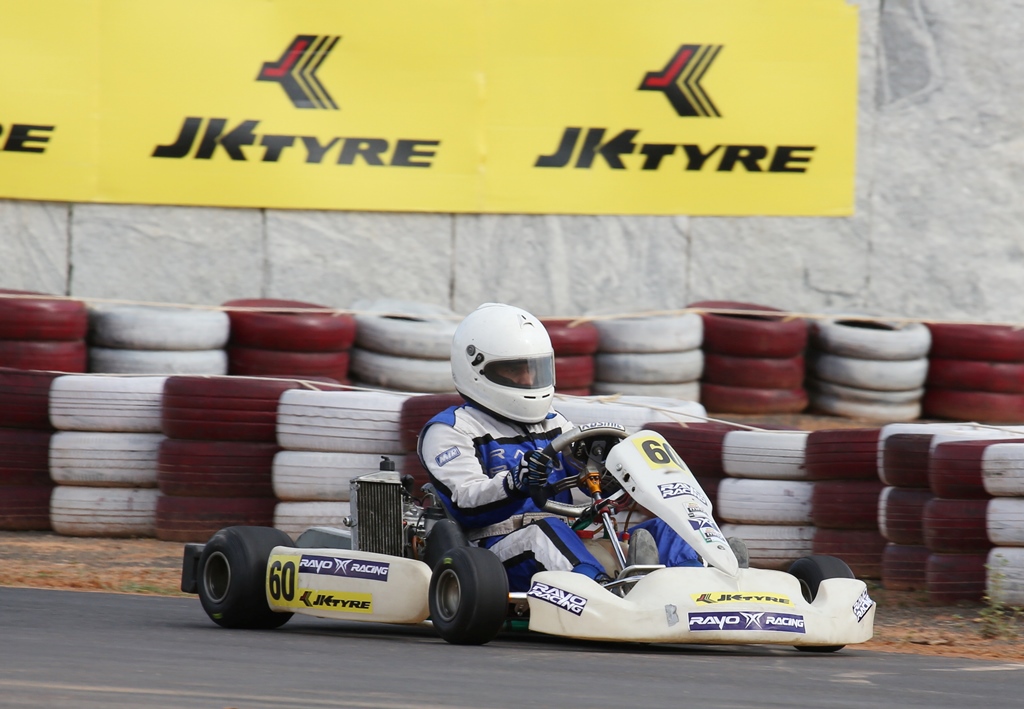 Bengaluru, 3rd June 2016 :Keen contests are on the cards in the opening round of the JK Tyre-FMSCI National Rotax Championship across various classes as unofficial practice got underway at the Meco Kartopia track here in Hennur, Bengaluru marking the start of the 2016 karting calendar in India. The races will be held in three classes – Micro Max (7-12 years), Junior Max (13-16 years) and Senior Max (above 15 years).

Coming off a long gap since the final round of the 2015 championship in September, the drivers used the six unofficial practice sessions in each class to shake off the rust and get into the groove before the official practice and qualifying sessions on Saturday.

From the look of things, in the Senior Max category defending champion, Ricky Donison will face stiff challenge from a clutch of drivers such as the highly-experienced Dhruv Mohite, former champion, Vishnu Prasad, highly-rated Nayan Chatterjee, who is competing in the Asia Max Championship in the DD2 category (shifter class) and last year’s Junior Max champion, Akash Gowda, who has moved up a class and is competing in the Senior Max category also has the pace to challenge the established names.

In the Junior Max category, Nirmal Umashankar is expected to be one of the frontrunners in the opening round. But it’s not going to be easy for him in the presence of equally quick drivers such as Manav Sharma from Faridabad, local lad, Paul Francis and the talented Yash Aradhya also from Bangalore. Mira Erada, the sole girl participant in the opening round of the championship, is also competing in this class.

In the Micro Max class, the fight at the front of the field is expected to be dominated by Ruhaan Alwa from Banaglore and Sahan Ali Mohsin from Agra.

Talking of this year’s field, Akbar Ebrahim of Meco Racing, the promoters of the championship said, “Since last year, the field has become quite competitive across all the classes. The unofficial timings hint that we will see close racing over the weekend. As more rubber goes down on the track, it will become faster. So, we are expecting some interesting action in the races.”

The 1.2-km Meco Kartopia track, built to CIK specification, consists of fast straights and 12 corners that are a mix of high-speed and medium configuration with a bunch of hairpins thrown in. The directional changes pose a handful of technical challenges for the drivers.

Explaining the nature of the track, Armaan Ebrahim, who was recently inducted into the Lamborghini Young Drivers programme and is a product of JK Tyre’s grassroots karting initiative said, “To do well on this track you have to work on all aspects of the kart; right from the engine to the chassis. You have to get the set-up right because in the highs-speed sections if you don’t get the sprocketing right, you will end up losing a lot of time.”

The race format over the weekend ensures that the participants get the maximum amount of seat time. Starting Saturday, the opening round of the JK Tyre-FMSCI National Rotax Championship consists of one qualifying session, two heats, one pre-final race and one final race in each of the three classes. Points are awarded for the pre-final and the final races at each round. This year, the championship will be decided over a total of five rounds.