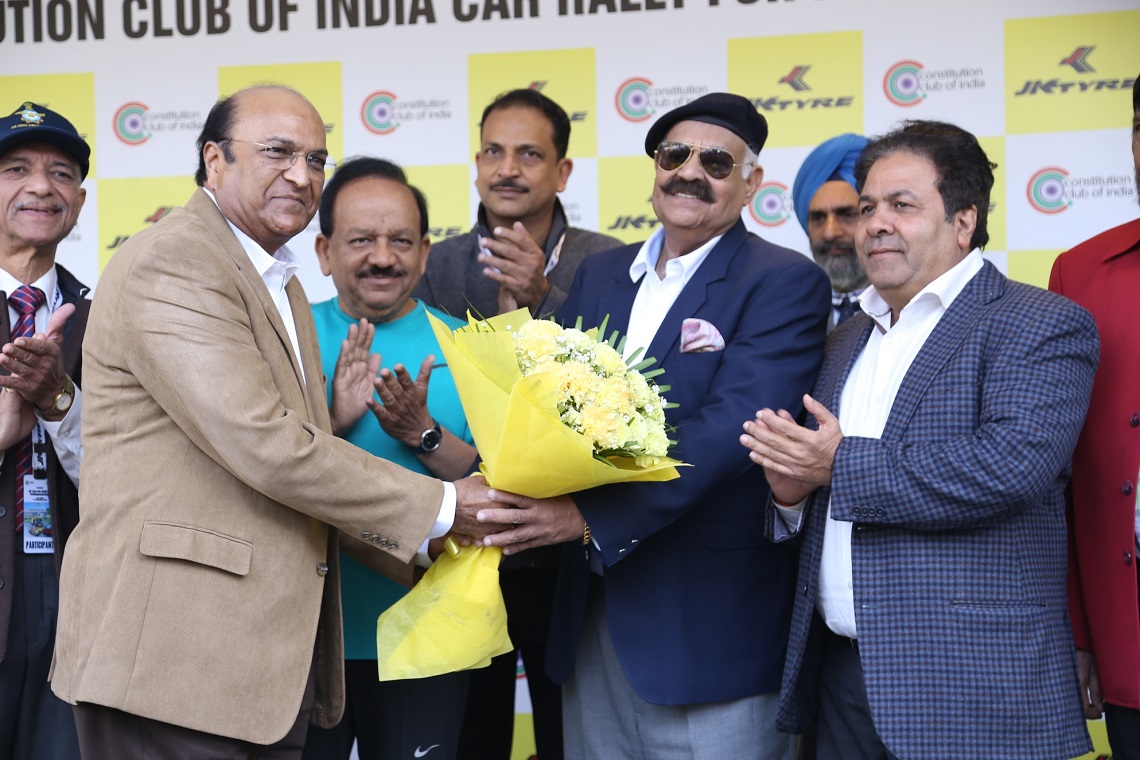 New Delhi,  11th Dec 2016:: The JK Tyre-Constitution Club of India Parliamentarian Car Rally was held here on Sunday amidst much fanfare and pomp. The 61-car field, coursed through the majestic roads of Lutyens Delhi, with many spectators cheering and applauding the racers.

The rally had been conceived by JK Tyre and the Constitutional Club of India to bring the parliamentarians together to spread awareness about road safety and smart driving.

"It goes with our mission of Total Control," Dr. Raghupati Singhania, Chairman and Managing Director of JK Tyre & Industries said. "The idea is to show that you can drive safely and responsibly. It is also in memory of all the parliamentarians who lost their lives in road accidents.," he added.

A touching documentary was screened in memory of prominent politicians who passed away in road accidents, shortly after the rally. It featured luminaries such as President Gyani Zail Singh, Gopinath Munde, Rajesh Pilot among others.

The rally and all the events during the day were co-sponsored by the Ministry of Skill Development, ONGC and Oil India while NTPC, Indian Oil, Vizag Steel and Air India contributed as associate sponsors.

The Constitutional Club of India, along with JK Tyres, has worked hand in hand to promote awareness about the event and the mission behind it. Honb'l. Minister of State (Independent charge) for Skill Development and Entepreneurship Rajiv Pratap Rudy who is also the CCI Secretary(Admin) has been the brain behind it.

“Most of us politicians spend a lot of time moving from one place to another by road. We now understand the importance of safety on road. We simply hope to make people aware of safety and want to spread the message of careful driving," the Minister said on the sidelines of the rally.

The rally was flagged off by VP Singh Badnore, the Governor of Punjab, at the Constitution Club of India, with the Army band playing in the background. Several top government dignitaries, bureaucrats, MPs and their families were also present at the flag-off and later at the award ceremony.

Over 60 teams participated, including 175 parliamentarians, diplomats, media, PSUs and armed forces personnel. Among other prominent parliamentarians, Minister of Science & Technology Dr. Harshvardhan and senior MPs Ramdas Athawale and Rajeev Shukla, among others, graced the occasion. The two-hour rally was fun time for the participants as well as their cheering parties.

Politicians came out in full support of the 'road safety' cause espoused by JK Tyre. They all paid homage to many great men and women who worked for the country and lost their lives on the road. "This is an initiative to bring MPs and Ministers beyond party affiliations together for road safety," CCI Secretary (Sports) Rajeev Shukla said.