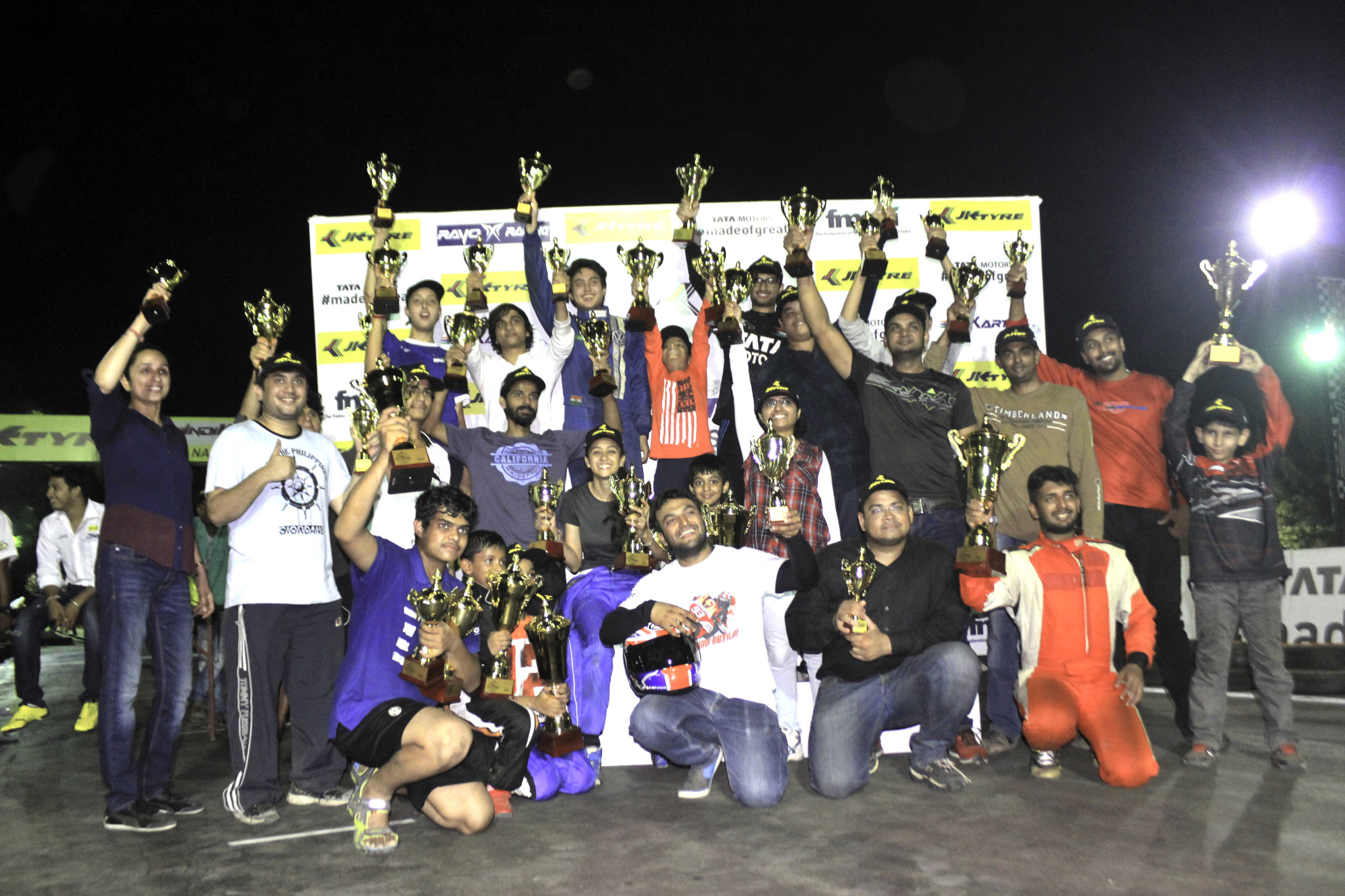 Mira, Rahul and Aadityansh Dominate in Vadodara at JK TyreIndiKarting National Series
17 May 2016

Vadodara, 17th May 2016: The JK Tyre IndiKarting National Series, powered by Tata Motors, brought kart racing back to Gujarat after a span of 13 years! Searing hot temperatures could not deter the 108 participants who came to race from all corners of India, at the Erda’s Speedway in Vadodara. The JK Tyre IndiKarting National series has been created with the intention of promoting motorsport at a grass root level and the success was evident with the very high number of first time racers. Award to all the winners were given away by Mr. Bharat Dangar – Mayor of Vadodara, Mrs. Tejal Amin - Chairperson of Navrachana Educational Trust and Dipen Gada – a renowned architect, on completion of the round.

Aaroh Ravindra from Mumbai dominated Race one of the Pro Senior Category, to win comfortably ahead of National Series leader, Aanjan Patodia of Pune. Rahul Sharan of Race Concepts, Bengaluru finished third. The finishing order of Race one was reversed to get the starting grid for Race two and this race proved to be the most exciting race of the event. The lead exchanged numerous times before Rahul Sharan emerged ahead of Aaroh and Aanjan. The three racers fought tooth and nail with a lot of overtaking happening amongst the three. Rahul eventually held his nerve to take his maiden victory ahead of Aaroh and Aanjan. Race three saw Aaroh grab an early lead and pull away, before he had to retire with a snapped chain. Rahul Sharan inherited the lead and held his position to win ahead of Aanjan Patodia and Rishab Rathi.

The Pro Cadet racers were extremely competitive as always. The youngest participant on the grid, seven year old Ranvir Singh from Pune had good pace to win Race one ahead of Aadityansh Kaulshi and Shaurya Kapani. Race two saw Aadityansh emerge winner under the reverse grid start ahead of Ranvir Singh in second ahead of Mumbai’s Shaurya Kapani. Race three was once again won by Aadityansh, while Saatvik Kogileti from Bengaluru came 2nd ahead of Hoshmand Elavia of Mumbai.

The Pro Junior too witnessed exciting action as Jonathan Kuriakose won Race one ahead of local girl – Mira Erda. Aditya Joshi from Pune was third. Race two saw the tables turn as Mira stormed to victory ahead of Aditya Joshi and Nitish Deshmukh from Pune. Mira once again dominated the third race in the Pro Junior, winning ahead of Jonathan and Aditya. Importantly Mira was the only girl on the Pro Grid and became the first girl to win a race in the JK Tyre IndiKarting National Series.

The support categories saw numerous first time participants. The Senior Amateur and Senior Open were both won by Mohammed Ridhaf, while Akshay Gupta came second in the Amateur followed by Mohd. Mubeen Shamsi. Bangalore’s Alex Bora took a well deserved second place in the Senior Open ahead of Akshay Gupta. The Interschool final was won by Mira Erda ahead of Reetwiz Mishra and Nitish Deshmukh. The top three in all these categories will represent Vadodara in the National Finial in the NCR region in June.

The Senior Plus was won by Nikhil Agarwal ahead of Guwahati racer, Samarth Choudhury, while Chintan Parikh who came all the way from Jamshedpur came in third. The corporate Final was won by Cyrus Dastoor from Pune ahead of Honey Patel and Priyank Aslalia. The Women’s demo saw Rajshree Chauhan win ahead of Parina Rana and Neema Erda, while the Master Demo was won by Jaiminirushi Patel ahead of Cyrus Dastoor and Parashanran Chari.

“In spite of the searing heat, it was great to see such a turnout in Vadodara. The fact that so many have travelled here from all over India is proof of the growing interest in motorsport. JK Tyre’s sponsorship to the series is crucial to us being here.” said Rayomand Banajee, promoter of the National series.

The next leg of the JK Tyre IndiKarting National Series will be conducted in Ludhiana on May 28 and 29, before ending with the final round in the National Capital Region on June 11 and 12.