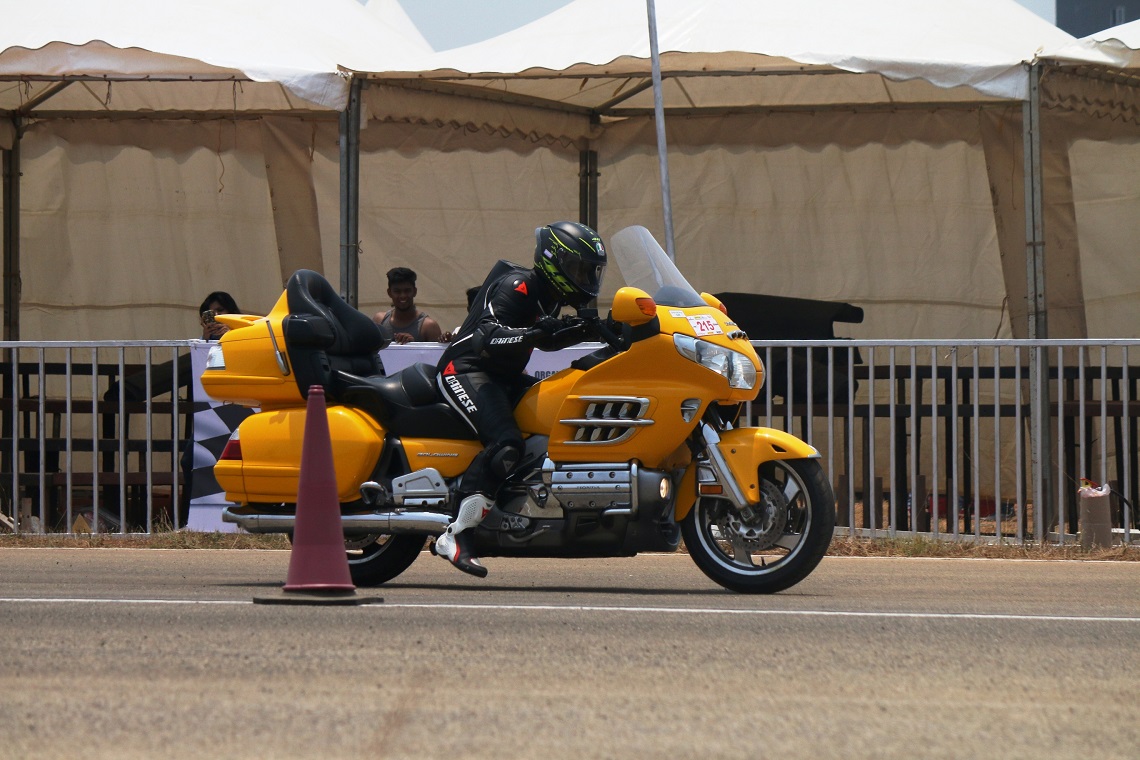 Bangalore, 29th April 2017::Mumbai's Iqbal Shaikh proved to be the consummate drag racer on Day One of the JK Tyre Vroom Quarter-Mile Rush here on Saturday, winning as many as three different categories and finishing third in another race on an action-packed day.

Iqbal, winner of over 100 trophies in various national and regional championships, clocked the fastest time of 13.171 seconds on his fancy-looking but highly effective Yamaha RD 350 in the 361-550cc class. He was invincible in the 166-225cc and the 4-stroke open class as well.

“During the scrutiny, I was asked to change my gear,” explained Iqbal, at the end of a highly rewarding day. “So, I wasn’t really comfortable and things didn’t go as expected. I managed good timings despite that and won a few events,” he added.

A tuner by profession and a passionate racer, he is not yet done though: he is going to compete in the bigger bikes, including the 851-1050cc and the 1051cc and above categories, as also in a couple of four-wheel races.

“Tomorrow is going to be a tough day,” he conceded. “The competition is going to be of a high class with many well-known and proven bikers in fray. I am however confident of my skills and my bikes and will hope to win a couple more,” he added.

Sunday promises to be an exciting day, with all the super bikes and super cars set to burn rubber all through the day. The voyeurs can also hope to see Lamborghinis and Mustangs, Bentleys and Porsches make an appearance.

A festive atmosphere reigned over the Jakkur Aerodrome as spectators on Saturday, as young and old fans, gathered in huge numbers to watch the modified bikes. As the sun beat a retreat after scorching the city over the last few weeks, fans danced to the beats of the DJ and clicked selfies with the men and their machines.

There was a ladies’ class too, with Neha Masurkar from Goa easily winning it with an impressive timing of 14.697 seconds. Bengaluru’s Priyanka finished second, taking 16.122 seconds as she struggled at the start.

The day’s hero, however, was local boy A Antony who clocked the fastest time of the day on his RD 350. He finished the race in 11.895 seconds in the 350cc and above category, with an amazing reaction time of 0.588 seconds at the start. He topped 179 kilometres per hour to record the best speed of the day as well.

Antony, a 43-year-old veteran, who has won seven national drag championships, shot off like a bullet and left his competitor on the adjacent lane, gasping for breath.

The 131-165cc class was the most popular event, with as many as 27 racers competing for honours. Hussain Khan claimed the bragging rights by winning this event, ahead of a number of accomplished racers, including Iqbal Sheikh.

Among other interesting categories out of the 14 held on Saturday, there were the Bullet Open and the Cruiser Open that saw the fanciest and heaviest bikes including the Honda Gold Wing and a Harley Davidson.