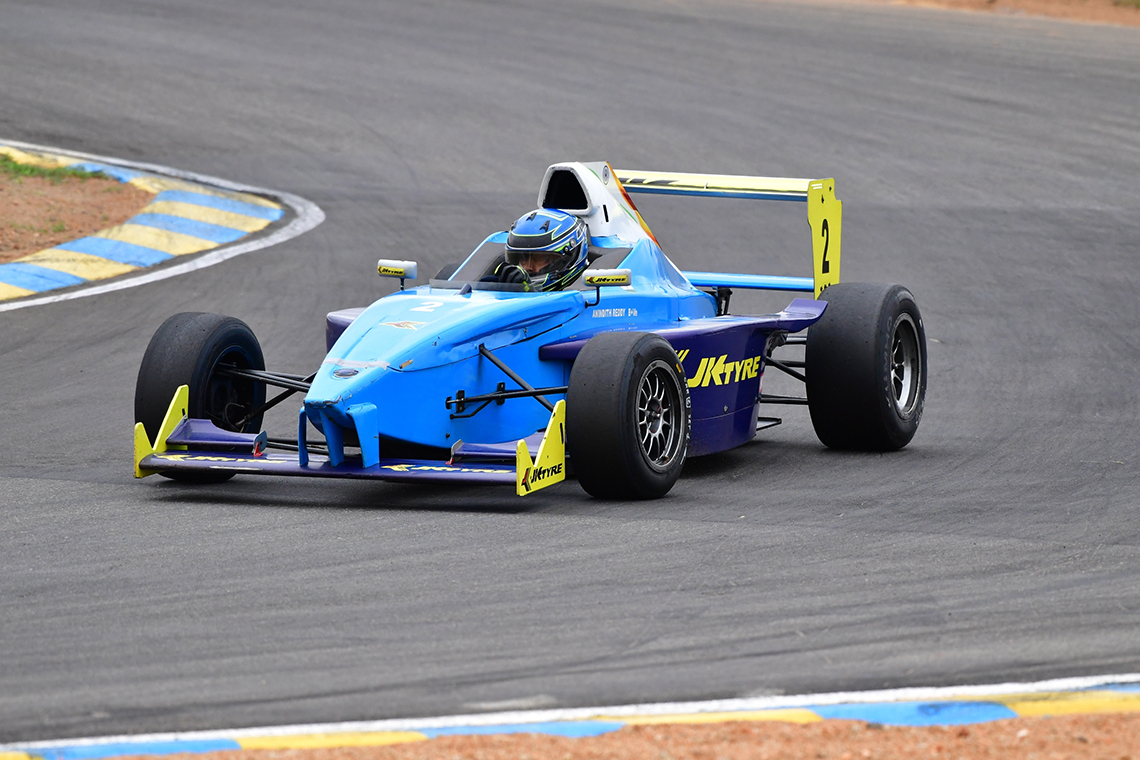 Coimbatore, August 05, 2017:Mumbai’s Nayan Chatterjee and Hyderabad’s Anindith Reddy scorched the track on Day 1 of the 20th JK Tyre FMSCI National Racing Championship in Round 2 here on Saturday, winning one race each in the highly competitive and exciting Euro JK 17 category.

As expected, the Euro JK turned out to be a heart-stopper with the top five drivers locked in an intense battle. As expected, Round 1 leader Vishnu Prasad began at pole and seemed to be in his elements once again, building a comfortable lead up front. He clocked the race’s fastest lap (1:01.218) and looked set for another win.

But in Lap 6, Sandeep Kumar crashed and the safety car came out, leading to a dramatic turn of events. It didn’t bother Vishnu as he held on to his lead one again. But behind him, Australia’s Ricky Capo found his opportunity and jumped into the second position as Nayan Chatterjee and Anindith Reddy tussled for supremacy. Capo held on to his position for his first podium finish in India.

It wasn’t meant to be Vishnu’s day though. In the penultimate lap, his engine suddenly stalled, and he could only watch helplessly as the field zoomed past him. Nayan eventually took home his first victory while Anindith had to be happy with the third place on the podium.

Race 2 was equally gripping, with the reverse grid coming into play. Nayan started at sixth and Anindith at fourth while Vishnu had to begin from the pit lane: last. Yet, he managed to beat one driver after another to take a very deserving third place.

“I had a good start and that was half the job done. I went all the way up to the second place from fourth and it was just a matter of overtaking one more after that,” Anindith said. “Brayan (Perera) defended his lead well but the pace was rather slow and that made me uncomfortable. I sold him a dummy and overtook him,” he added

In the Gixxer Cup, Joseph Mathew of Chennai continued his winning run, recording his third victory in the championship. He finished a full 5 seconds ahead of the 22-member strong field to underline his dominance. Sanjeev Mhatre (Mumbai) and Lalmawipuia (Aizawl) took the second and third positions.

“It was a tough race,” Chittesh conceded. “All the drivers were really fighting hard and it could have been anybody's race. It was in the second last lap that the driver ahead of me made a mistake in one of the corners and I capitalised on it to surge ahead and hang on to the lead,” he added

The Aizawl boy wonders were once again the cynosure of all eyes. Lalhruaizela and Lalnunsanga rode like champions and almost dismantled the Sri Lankan lad Jaden Gunawardena form the top position. Lalhruaizela, in fact, was just a hundredth second behind him and is sure to give him a run for his money on Sunday.