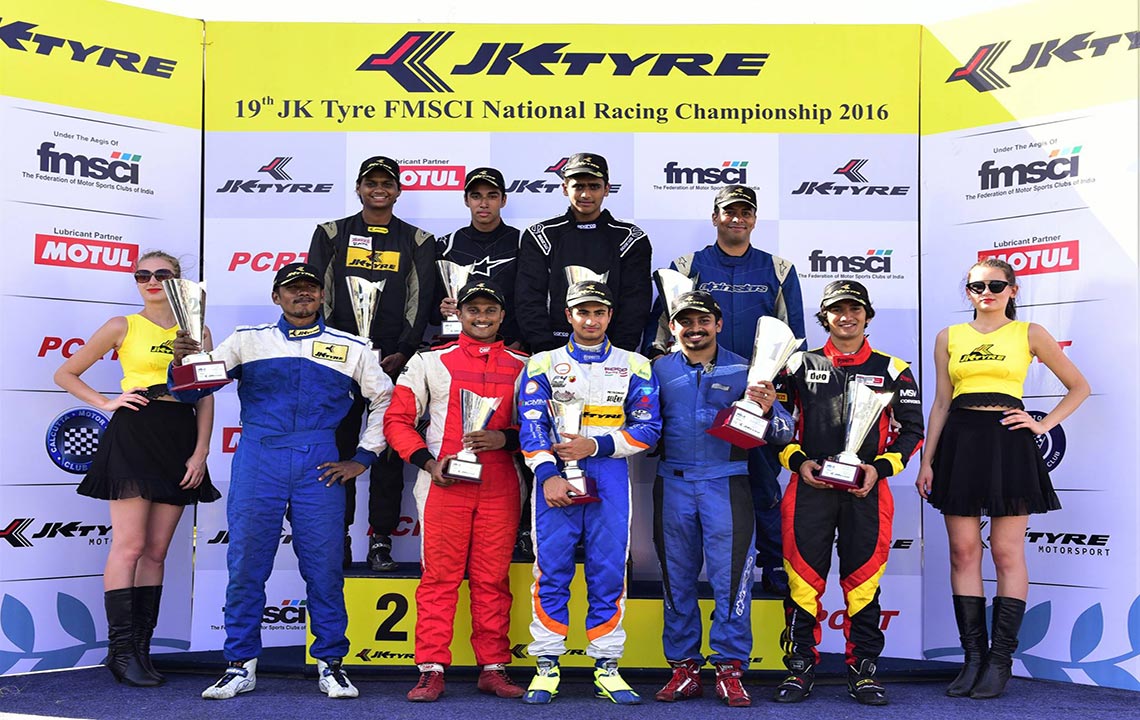 Coimbatore,  31st July 2016: On a hot and humid Sunday at the Kari Motor Speedway, Nayan Chaterjee emerged as the driver with luck, pluck and pace as he completed a grand double in the Euro JK 16 category of the JK Tyre FMSCI National Racing Championship.

Ricky Donison on the other hand will consider himself unlucky as everything that could go wrong did so for him over the weekend. He finished first in two races, the first time on Saturday and then on Sunday, but had to surrender his place at the top of the podium on both occasions as he had jump-started. He was penalised by 10 seconds, pushing him down to the sixth and the third place for a disappointing turn of events.

Nayan was the lucky beneficiary on Race 3 in this category, taking the first place in a fiercely contested race. He, Ricky and Krishnaraaj Mahadik went bumper to bumper until Ricky found some space to sneak ahead in the eighth lap. He couldn’t be touched after that. His joy was, however, short-lived as the stewards caught his mistake and punished him.

Nayan didn’t need any help from lady luck in Race 4, the last race in the Euro JK category, as he easily and confidently went past the chequered flag. He recorded the fastest three laps in the race to leave Kush Maini and Ricky Donison desperately trying to catch him.

“I am really glad that I could finish first in both the races today. It wasn’t easy as every driver was on fire,” Nayan said at the post-races press conference.

All races, despite being hotly contested, recorded lower timings on Sunday, with Nayan completing his win in 15:46.852 minutes. Race 1 on Saturday had seen Kush Maini win in 14:45.354 minutes while Race 4 saw the winner come through almost a minute slower. It was the same story in the LGB Formula 4, with Rohit Khanna of Dark Don Racing taking as much as 20:29.629 minutes to win Race 3 while Vishnu Prasad took just 18:20.004 minutes in Race 1.

Ashwin, starting from the third place, drove brilliantly to win the race in 21:33.105 minutes. He had a spectacular timing of 1:12.546 minutes in the fifth lap to steal the thunder on the action-packed day that saw racing legends and the Bikerni Group consisting of lady bikers from Bengaluru wowing the crowds with their stunts and rides.

Ashish Ramaswamy of Red Rooster Performa won rather easily in the Gentleman’s Cup category to make it a grand double for himself. He had won the opening race on Saturday and didn’t brook any competition on Sunday either.

C Rajaram, who finished second on Saturday, couldn’t finish the race and yielded the second position to Vidyaprakash Damodaran who will be happy with his performance so far, having finished third on Saturday. That has put him second on the championship table.