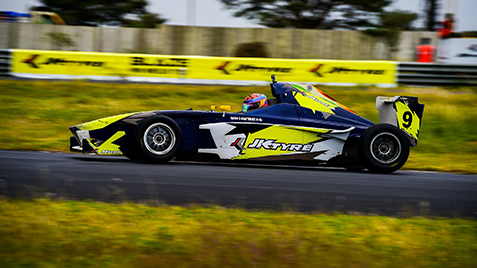 Coimbatore, September 1: Mumbai’s Nayan Chatterjee and the Chennai duo of Vishnu Prasad and Joseph Mathew underlined their class in Round 2 of the JK Tyre FMSCI National Racing Championship here on Saturday, winning their respective races in great style on the opening day here at the Kari Motor Speedway.

Nayan Chatterjee was at his fastest best in the Euro JK 2018 category, making his intentions clear in the morning qualifiers itself. In an incredibly pacy session that saw the entire field finish virtually inside a few breaths of each other, he clocked the fastest lap time of 1:00.514 minutes.

Nayan continued his great run through the day, winning both his races quite comfortably. He collected 16 crucial points to stake his claim for this year’s crown.

Karthik Tharani claimed the second place in both the races while Sri Lanka’s Brayan Perera and Ashwin Datta shared the third place to leave the competition tantalisingly poised.

Vishnu Prasad and Joseph Mathew continued their dominance in the LGB 4 and Suzuki Gixxer Cup, picking up 10 points each to hang on to the top position on the championship leaderboard.

Rohit Khanna (Dark Don Racing) and Raghul Rangasamy (MSport) took the second and third places to maintain their primacy on the points table. Lea Daran proved to be the fastest lady in this category, finishing 15th for Ahura Racing.

Joseph Mathew was, like always, in his elements in the Suzuki Gixxer Gup. He began at the third place in the starting grid but managed to shake the competition and get past the post first.

It was a thrilling finish, with Joseph and Syed Muzamil Ali literally going neck and neck in the final stretch. Sachin Chaudhary took the third place.

The Red Bull Road to Rookies saw a minor flutter as Jerome Vanlalrengpuia upset the Round 1 winners. He claimed the top place while PC Andy Lalhmangaihsanga and Eshaan Shankar came in behind him.

The freshly introduced category, the JK Tyre Novice Cup which will be the bridge between karting and formula racing, saw Nellore’s Vishwas Vijayaraj (DTS racing) outshine 21 other racers. Siddharth Mehdiratta of Lucknow and Hashim EKP finished second and third.