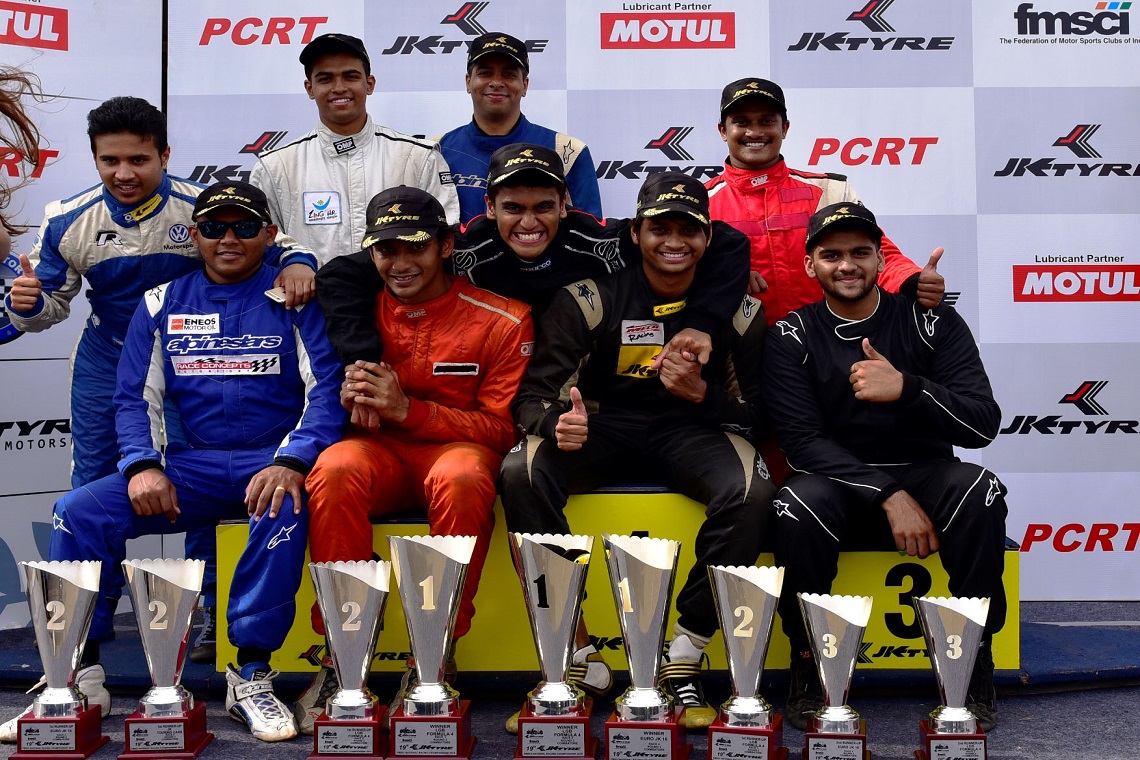 Coimbatore,  11th Sept 2016:: Nayan Chatterjee consolidated his position in the second round of the 19th JK Tyre-FMSCI National Racing Championship here at the Kari Motor Speedway, winning both his Euro JK 16 races in style on Sunday.

In the LGB Formula 4, however, Vishnu Prasad had to pull out all his fighting acumen and acute driving skills to jump into the championship lead. The lanky racer from Chennai, who was nursing a leg injury, had to be at his sharpest to pick up 28 points over the weekend for a cumulative total of 36 points.

Ashish Ramaswamy too had to work hard to win his race on Sunday to maintain his total dominance in the JK Touring Cars category.

Nayan is the runaway leader now in the Euro JK 16 class, having won as many as four races till now. He has 58 points in his kitty, 10 clear of the second-placed Ananth Shanmugam. Dhruv Mohite is at third with 39 points.

Like in the first round, Nayan struggled with his pace on Saturday, only managing the third place in the first two races. But on Sunday, once again, he was a different racer altogether. He exhibited amazing pace and was virtually uncatchable in the final race, even though the speedy Ananth Shanmugam was snapping at his tail in each of the laps.

Nayan got a lucky break in the first lap itself, though, with the morning’s darling Ajay Kini getting into a melee with Anindith Reddy and Karthik Tharani. He took advantage of it to pick up a huge lead. But Ananth from Karnataka upped the ante in the latter part of the race and almost overtook Nayan in the final lap.

“He was really quick,” said Nayan of Ananth, clearly looking relieved to have warded off his challenge. “Luckily, my car setup was good today and I held on to my nerves,” he added.

In the morning, Nayan was even more spectacular, streaking past one driver after another in a spectacular display of racing. He started off in the fourth position with the reverse grid coming into play to get the psychological edge over overnight leader Ananth Shanmugam. Akash Gowda and Ajay Kini at P1 and P2 just didn’t have the pace to hold him off and yielded the lead by the first turn itself.

The field got an opportunity to catch up with Nayan in the 10th lap when the safety car came out. Ajay Kini gave it his best shot, as did Ananth, but neither could even rattle the leader.

The LGB Formula 4 saw a stunning finish in the morning, with Ashwin Sundar of Dark Don Racing outsmarting Vishnu Prasad of Meco Racing in the final home stretch. He was, however, handed`a 10-second penalty for his driving which saw him slip down to fourth position. That saw Raghul Rangasama move up the ladder to first position. Vishnu took the second place.

The bitterness spilled over into the second race too. Vishnu, however, held his nerve this time and jumped into the lead quickly to win the race. Pole starter Raghul Rangasamy of Meco took the second place while Ashwin couldn’t event finish the race, pulling out in the seventh lap.

Ashish Ramaswamy of Red Rooster Performance continued to dominate the JK Touring Cars class, winning his fourth race in succession. He had his toughest day yet though, with Deepak Chinnappa of Race Conceot breathing down his neck all through the 10 laps. “It was a tough race,” Asish said. “I had to bring out all my experience to win this one,” he added.