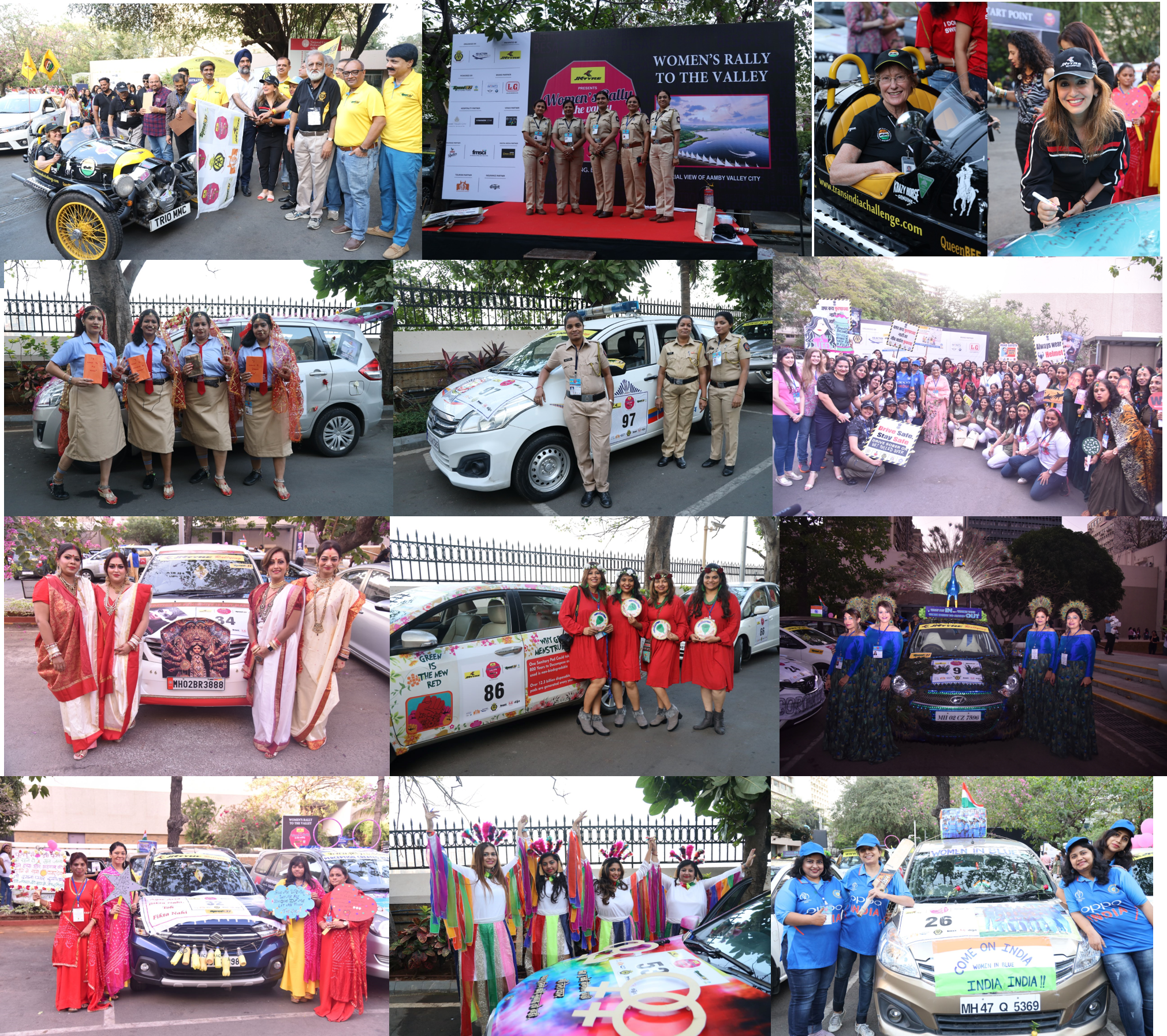 Mumbai, March 8: Over 400 ladies in more than 100 cars turned up to compete in the annual JK Tyre WIAA Rally to the Valley here on Sunday, celebrating International Women’s Day in their own unique way.

The popular TSD Rally, in its sixth year, is an important fixture in Mumbai’s motorsports calendar as it endeavors to celebrate the empowerment of women.

Presented by JK Tyre, the rally was flagged off by popular Indian actress Perizaad Zorabian, along with other dignitaries including Mr. Nitin Dossa, Executive Chairperson, WIAA and Mr. Hari Singh, Head of Operations of JK Motorsport and a celebrated Rally Champion.

Traversing through the iconic streets of the city, the rally culminated at Aamby Valley at Lonavla in the evening.

Like every year, the ladies decked up their cars and themselves in various innovative themes, creating a party-like atmosphere at the NCPA. Among the socially relevant themes that the ladies espoused were ‘solidarity with acid-attack survivors’, ‘fight against child marriage’ and ‘bleed with dignity’.

Some of them celebrated ‘LGBTQ freedom’, while a vehicle and its occupants spruced up as proud peacocks conveyed the emboldening message - ‘why fit in when you can stand out!’. One of them had the presence of mind to wish the Indian women’s team playing in the T20 team Down Under the best of luck.

Maharashtra Police too fielded two cars, with four lady cops in full uniform in each of them promoting the key message of the rally: Road Safety and Women Empowerment. This was the underlying theme adopted by most participants even as quite a few celebrated the women who were breaking the glass ceiling with their efforts.

There were a handful of them who took great pride in showcasing the entry of women into the armed forces.

Individually too, there were fascinating entries, led by a 79-year-old lady who had two of her granddaughters as her navigators. “I have been driving for 62 years and am totally excited,” Mrs. Rajkumari Kasliwal said. “My only problem in a TSD rally format is how to keep my speed down,” she quipped, much to the amusement of everybody present,

There was a foreign entry too in the form of Pat Braithwaite who arrived in time for the Rally after driving a Morgan 3-wheeler for 3,500 miles (5,600km) around India in support of a not-for-profit NGO Goonj.

Braithwaite was delighted to complete her lifetime dream of driving all around India. “I’m thrilled that we have achieved this. I didn’t realise how difficult the roads would be, but the team has done an amazing job in keeping us safe. And I am especially glad about making it back in time to get to be a part of today’s rally and to celebrate International Women’s Day in such a marvelous way” she said.

“The main objectives of the Rally was to create awareness in the society about Women Empowerment and Road Safety on roads, in public transport and, generally, in public places,” Nitin Dossa, Executive Chairman of Western India Automobile Association (WIAA), said.

JK Tyre has played a pivotal role in bringing women into motorsports in a big way. Apart from introducing an all-women racing team in their National Racing Championship, the company has undertaken various other initiatives like the YLFO Power Drive and the Women’s Rally to the Valley, among many others. In their ongoing efforts to support the cause of women in Motorsport, JK Tyre joined hands with the Defence Forces and organised a first-of-its-kind event- the ‘JK Tyre Defence Wives Power Drive’ for the wives of armed forces personnel last year.

“We are proud to be associated with the Rally to the Valley,” Sanjay Sharma, Head-Motorsport – JK Tyre, said. “It fits in with our philosophy of empowering women and encouraging road safety. It’s encouraging to see so many ladies stepping forward to take part in this amazing rally,” he added.

The participants, including mother-daughter duos, friends and families in their own decorated cars, were primed for the event after a detailed briefing. The entire route was sanitised and cleared for a smooth ride with the presence of safety volunteers throughout the route.