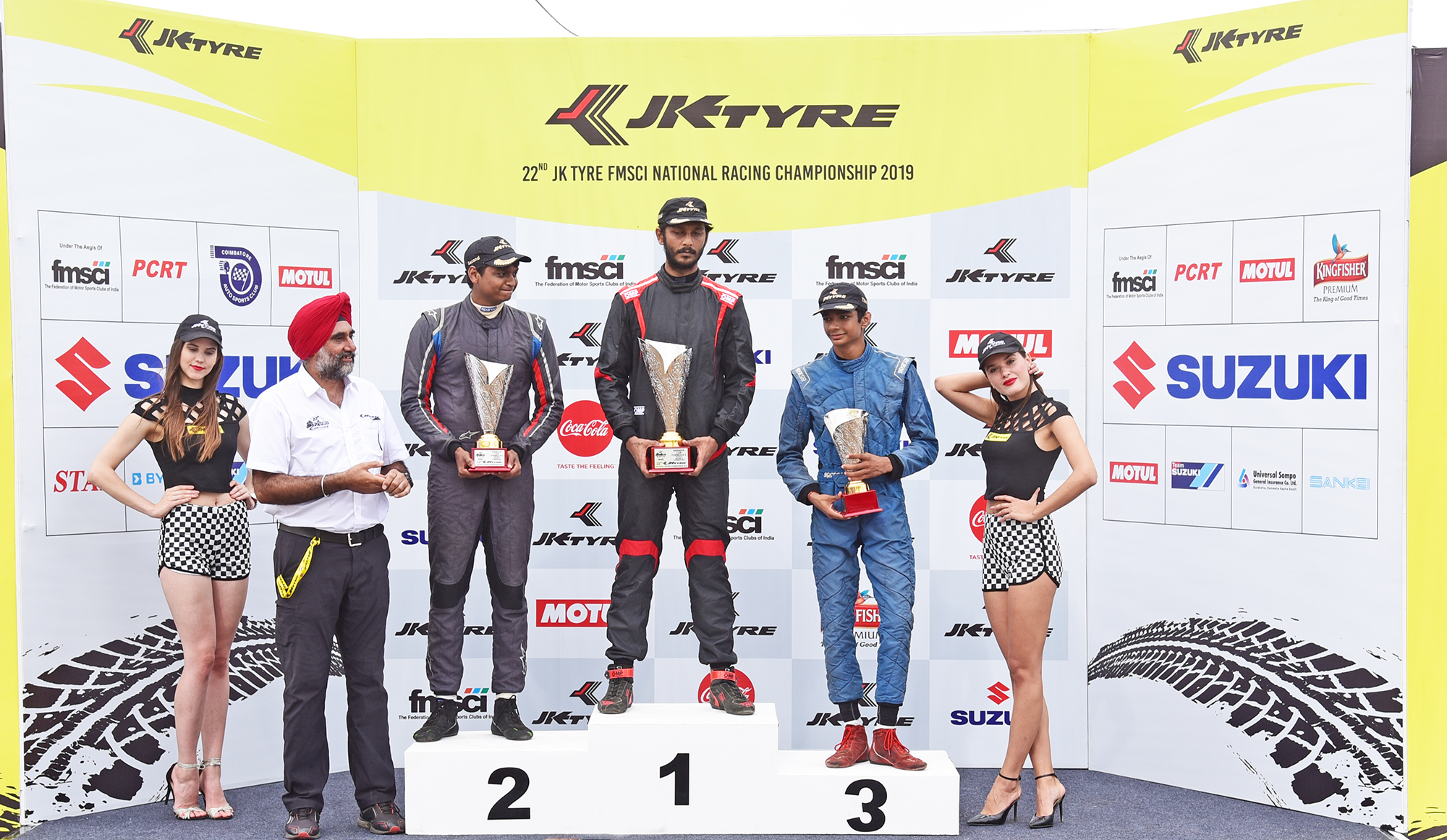 On a day of intense battles and loads of drama, Chennai’s Raghul Rangasamy came out trumps, collecting 18 points to shoot to the top of the FLGB-4 table as Round 2 of the JK Tyre FMSCI Indian National Racing Championship concluded here on Sunday.

Most of the big excitement, as expected, emanated from the LGB category, with multiple national champions gunning for glory. After Sohil Shah (MSport) set the stage for a no-holds-barred fight on Saturday with a cheeky win, it was Diljith TS’s (Dark Don) turn to bring Sunday to life.

Beginning at P7 as the reverse grid came into play, he exhibited speed and control to steadily move up and take the first place. Raghul (MSport), who was at P5, got caught in the front pack to lose the initiative and settled for the second position.

Raghul, however, took advantage of a similar situation in the day’s second and final LGB-4 race to win it in dramatic fashion. His fourth-place finish on Saturday was enough to give him a total of 47 points. That took him past teammate Vishnu Prasad, who didn’t have the best of weekends despite racing out of his skin.

Vishnu also suffered the worst of lucks, being cheated by the safety car when he was leading with a big margin in the last race. He had to settle for the second position while he had already endured a sixth-place finish in the earlier race to slip down to a total of 45 points in the two rounds. Diljith, who often seemed alone in this dog-fight, was placed third with 31 points.

Tanay Gaikwad stole the thunder in the Suzuki Gixxer Cup, collecting the maximum possible 20 points to join Syed Muzammil Ali (Bangalore) at the top of the table.

After winning the first race on Saturday, Tanay showed his class on Day 2 too, posting his second straight victory. Muzammil clocked the day’s fastest lap (1:23.681) but finished 0.068 seconds behind in the 10 laps.

Mumbai’s Aaroh Ravindra stayed ahead in the JK Tyre Novice Cup, by collecting 10 more points to make it a grand sum of 52, including 28 this weekend. Bangalore’s Chirag Ghorpade was second with 39 points, after a second-place finish.

Vadodara’s Mira Erda continued to rule in the women’s category, finishing ahead of all the ladies for the sixth consecutive time. Coimbatore’s Megaa KS (45) and Anushriya Gulati (28) were in the hunt behind her.

Chennai’s David Ryan, who was the standout performer in the JK Tyre Inter-College Cup on Day 1 with two wins, lost his pre-eminent position to Sai Prithvi (also Chennai) on Sunday. He, however, finished second to hold on to his overall lead with 28 points.

The day’s winner Sai Prithvi S (Chennai) and Kedin Akhil (Kolkata) were tied on 16 points for the next two positions.

Ikshan Shanbag (Satara) claimed the JK Tyre Redbull Road to Rookies, winning both the races over the weekend. He maintained a clean slate after showing his class in Round 1 too.