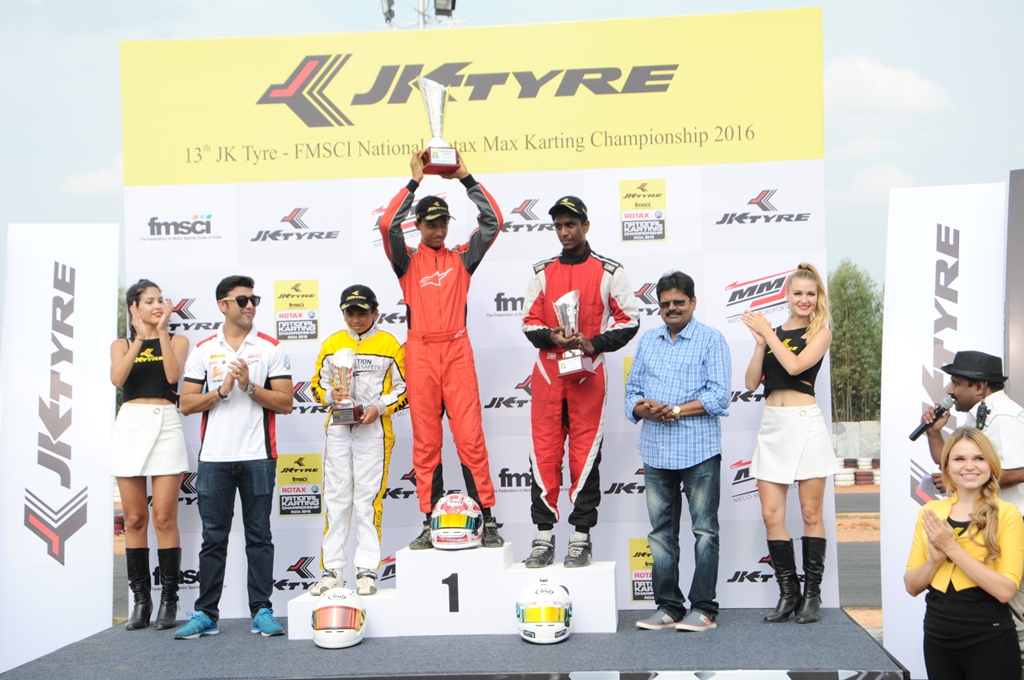 Bengaluru, 5rd June 2016 : The country’s best karting talent provided for edge-of-the-seat racing in the finals and pre-finals of the opening round of the 13th JK Tyre-FMSCI National Rotax Championship at the CIK-spec Meco Kartopia track in Hennur, Bengaluru. Living up to JK Tyre’s core philosophy of developing motorsports at the grassroots level, the opening round of the championship provided ample evidence that this championship is critical for the success of motorsports in the country.

In the Senior Max category (above 15 years), it was Ricky Donison all the way who dominated the entire weekend with his flawless driving. After topping the unofficial practice sessions, Donison won both the heats and the pre-finals to assert his imperious form in the opening round of the JK Tyre-FMSCI National Rotax Championship.

In the finals, once he shot into lead, Donison just kept extending the distance between him and the chasing pack. Ameya Bafna of Rayo Racing, who came into the first round of the championship without any testing, came up with an inspired performance to claim second place, but still it was not enough to challenge the race leader. Nayan Chatterjee of Meco Racing, who fell back into sixth place on the first lap, worked hard to move up the order to take third place. Bafna and Chatterjee finished in second and third places respectively in the pre-finals as well.

In the Junior Max category, Manav Shrama of BPC Racing controlled the pace from the front in both the finals and pre-finals. Starting the pre-finals in fourth place, he took advantage of a first corner tangle between Yash Aradhya and Chirag Ghorpade to slot himself in the lead, which he retained till the flag despite Paul T Francis of Meco Racing trying his best chase down the leader. Nirmal Umashankar finished in third place.

In the finals, Sharma kept himself out of trouble going into the first corner. Once he got in the clean air, the BPC Racing driver kept his head down for the remaining 18 laps to the chequered flag. He crossed the finish line a healthy 2.8 seconds ahead of the chasing pack. Nirmal Umashankar had a race-long scrap with his Meco racing team-mate, Paul T Francis, to claim second place. Francis brought up the final spot on the podium.

For Yash Aradhya, it was a day he would like to forget in a hurry. After dominating both the heats on Saturday to emerge as one of the favourites, he lost out in the first corner scarp in the pre-finals and in the finals his hopes of making any recovery went up in smoke when he was forced to retire with engine trouble on the second lap.

In the finals of the Micro Max class (7-12 years), Shahan Ali Mohsin, who is leading the cadet class in the Asia Max Championship in Malaysia, had to really dig deep to keep Ruhaan Alva at bay in a race that saw the front-running pair swapping the lead a number of times. Going into the final race, Shahan had to set aside the disappointment of the pre-finals, which he won, but was handed a 10 second penalty for making a jump start that put him in third place for the final race. Alva settled for a hard fought second place while the winner of the pre-finals, Yeasash More, finished in third place.

“This weekend we saw some great racing by some of best young talents in the country. The idea of the JK Tyre-FMSCI National Rotax Championship is to unearth new talent at the grassroots level and this round once again proved that there is no dearth of talent in the country. The quality of racing was very high and a number of drivers across various classes are participating at the international level. It helps the cause of Indian karting as well,” said Sanjay Sharma, Head Motorsports and Corporate Communication, JK Tyre & Industries.