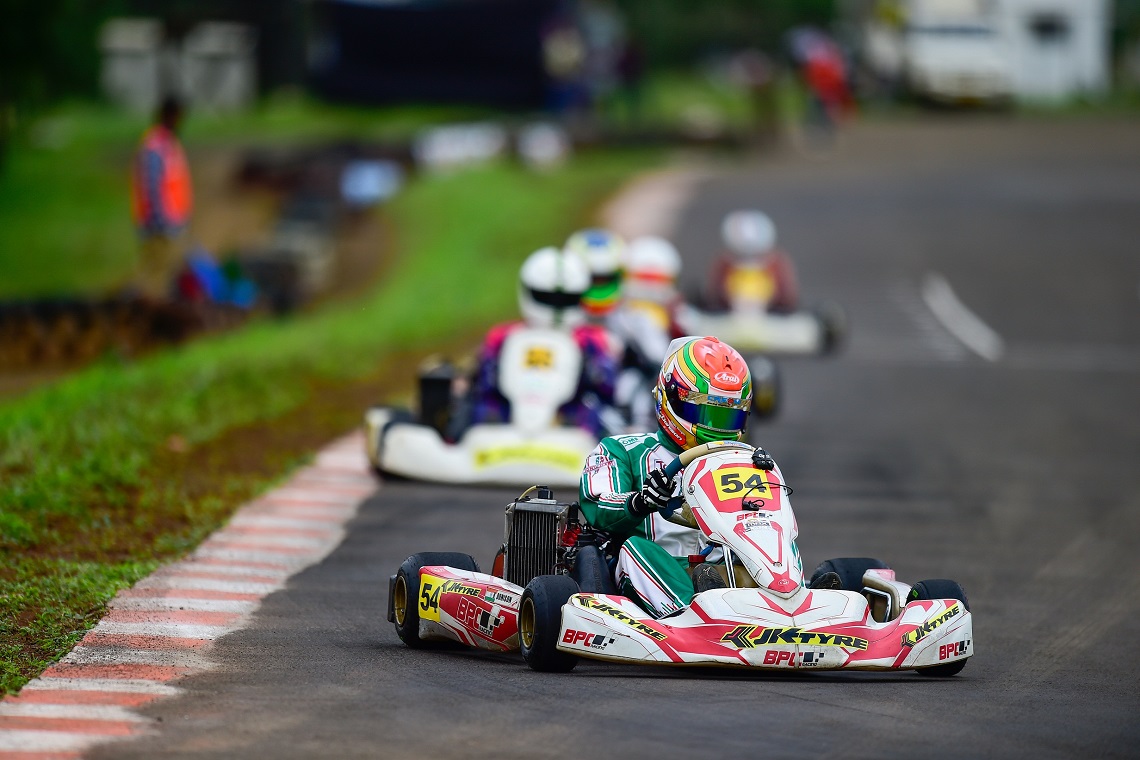 In the Junior Max, Chirag Ghorpade grabbed the honours by winning the first heat and playing it safe in the second, pulling out of the race to save his wet tyres in the fifth lap. He will hope to take advantage of his pole position to pull off a sensational win on Sunday.

Ricky of BPC Racing showed his class on Day 1 of the championship weekend, grabbing the pole position from Vishnu Prasad in the qualifying and marking his intent right away. In H1, he built a huge lead by the second lap itself and looked untouchable all the way through. He clocked a stupendous 51.320 seconds, amazingly in the last lap to show that he is not going to let up until the final chequered flag comes out on what promises to be a stupendous Sunday.

The Bangalore-based racer was equally imperious in Senior Max’s H2, quickly storming ahead of the field and taking the race with elan. He is currently on 324 points, just four behind the championship leader, Vishnu Prasad, and will fancy his chances on the big day, when a full house is expected to turn out to witness the grand finale.

Local hero Dhruv Mohite gave Kolhapur’s fans a lot to cheer by snatching P2, and staying in line to pull off a sensational upset. He finished second in the first heat and third in the second to stay in the reckoning. He is on 314 points and knows that two great runs on Sunday can well give him the championship.

He took advantage of a melee in the opening round of H1 itself to jump into the second position from third. In H2 too, he was in his elements, giving Ricky a run for his money. But he lost steam at the midway stage, allowing Nayan to come back into the action. The Mumbai lad will start on P3 while Vishnu of Meco will start on P4.

In Junior Max, almost the entire field opted for a strategic race, not finishing H2 to save their tyres for the last two races just in caesarian plays spoilsport. One after the other, all the top contenders pulled out to give themselves a better chance to go for the kill on Sunday. In the event, the only lady karter Mira Erda of Erda Racing emerged the surprise winner in H2. She was followed home by Aditya Swaminathan and Bhragav Pradyumna, both of Meco.

That will, however, not affect the grid positions for the pre-finals on Sunday substantially. Ghorpade (BPC Racing) will begin at P1 while Mira and Nirmal Umashankar will begin on P2 and P3. Manav Sharma, who will start at P4, remains ahead in the championship race with 334 points. Ghorpade is fourth with 317 points and will try to make the most of this huge advantagetomorrow.

Newly crowned Asian Micro Max champion Shahan Ali (Meco) underlined his skill and temperament by winning his two heats in totally different conditions. Just after lunch, with the clouds still too far away to pose any threat, he built on his pole position to build a sizeable lead in the Micro Max. But the Meco racer had to absorb a lot of pressure in the latter part of the race as Aadityanash (Rayo) literally sat on his tail, looking for an opening to streak past him.

Shahan, however, demonstrated remarkable calm and amazing defensive acumen to ward him off. Expectedly, he recorded the fastest lap (57.505 seconds) in the tenth lap; Aadityansh was just two tenths of a second behind him to show how aggressively he was driving. It was a breeze for Shahan in the second heat though, winning the wet race comfortably in 11.14.584 minutes.

This was a crucial win for him. In the previous round, the slippery conditions set him back. But this time, he tackled the wet race with equal ease and jumped ahead and held on to the lead all the way till the last lap. He could only manage a fast lap of 1:06.604 minutes, coincidentally again in the tenth, but that was good enough to put him in the best position for Sunday’s finals. Arjun Nair (Meco) who finished third in the first heat and runner up in the second will start at P2. Aadityansh will be at P3.