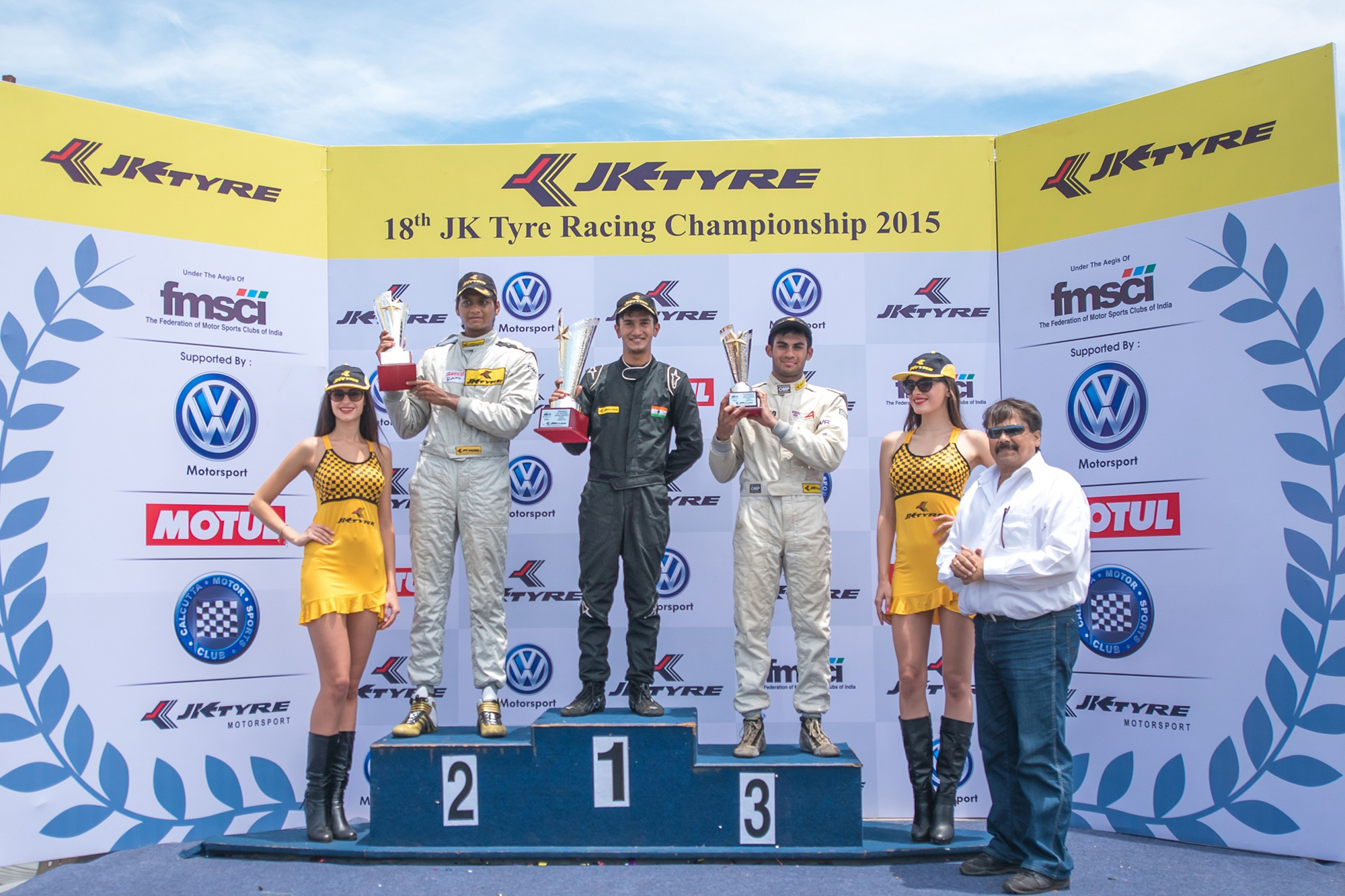 Coimbatore, September 6, 2015: Round 2 of the 18th JK Tyre Racing Championship concluded here on a hot and sunny day at the Kari Motor Speedway, Coimbatore. The day witnessed 2 races of the JK Racing India Series and a race each of the Formula LGB 4 and JK Tyre- Volkswagen Vento Cup.

Kari Motor Speedway was bustling with thousands of fans who were present to witness the race weekend. The fans were kept entertained not just with the high octane racing but also with some world class racing stunts that were performed by India’s best stunt drivers on two wheelers & four wheelers.

The day started with the powerful JKFB02 cars take to the track with Krishnaraaj Mahadik starting on pole due to the reversed grid format in the JK Racing India Series. Mahadik was overtaken by Vishnu Prasad after the very first lap but on lap 3 Krishna made his move and passed Vishnu thereon maintained his lead to the chequered flag. Vishnu Prasad was given tough competition by Kush Maini who was racing wheel to wheel with him, waiting for that one opportunity to overtake Vishnu but was unable to. Clearly disappointed by yesterday’s performance, Akhil Rabindra came back with a bang and starting on the eighth position he made his way upto the fourth place. Having the safety car out on track because of few spins worked in Akhil’s favour as he closed in on Kush. Once the safety car was off the track, Kush in his attempt to gain speed faced some problem with his shift gear and the experienced Akhil cashed on the opportunity and overtook Kush. Karting graduate Krishnaraj Mahadik won Race 2 of the JK Racing India Series ahead of Vishnu Prasad and Akhil Rabindra.

Race 3 of the JK Racing India Series, also the last race of the weekend went down to the wire as the racers fought it out till the last lap for the podium. Bangalore boy Ananth Shanmugam had an impressive weekend as he registered his first win in the JK Racing India Series. Ananth who has graduated from the JK Tyre National Karting Championship started from pole position and led from start to finish. The battle behind him was very close with four cars fighting for the remaining two podium spots. Vishnu however did not make it that easy a win for Ananth as they raced bumper to bumper in the last two laps. But Ananth managed to keep his pace and finally took the chequered flag. In the end, Vishnu finished second and Karthik Tharani from Chennai finished third.

Second race of the day was the Formula LGB 4 and undoubtedly the race with the maximum action on track. Out of the 21 cars, only 13 cars managed to finish the race as the other eight cars spun off the track causing the safety car come out on the track. It was a closely fought battle between the top eight for the podium. The calm headed 26 year old Ajay Kini used his strategy and without showing any aggressiveness on the track made correct moves and in the end took the chequered flag thereby registering his hattrick.

Raghul Rangaswamy started fifth and did not take any risks and finished behind Kini. Diljith had a brilliant start and within few laps he had managed to make his way up to the top ten and with every lap upgraded his position and took the third place on the podium.

Delhi boy Karminder Singh got back to the top step of the podium with a win in the JK Tyre-Volkswagen Vento Cup. It was a clean race with the safety car not coming out throughout the 15 lap race. Karminder Singh had a great start from sixth on the grid. He slowly pulled away from the rest of the pack and crossed the line in the first place to take a well-deserved win. Finishing second was Ishaan Dodhiwala from Hyderabad and Anindith Reddy finished third.

The drivers will be back at the Buddh International Circuit for the penultimate round scheduled from Oct 16-18, 2015.