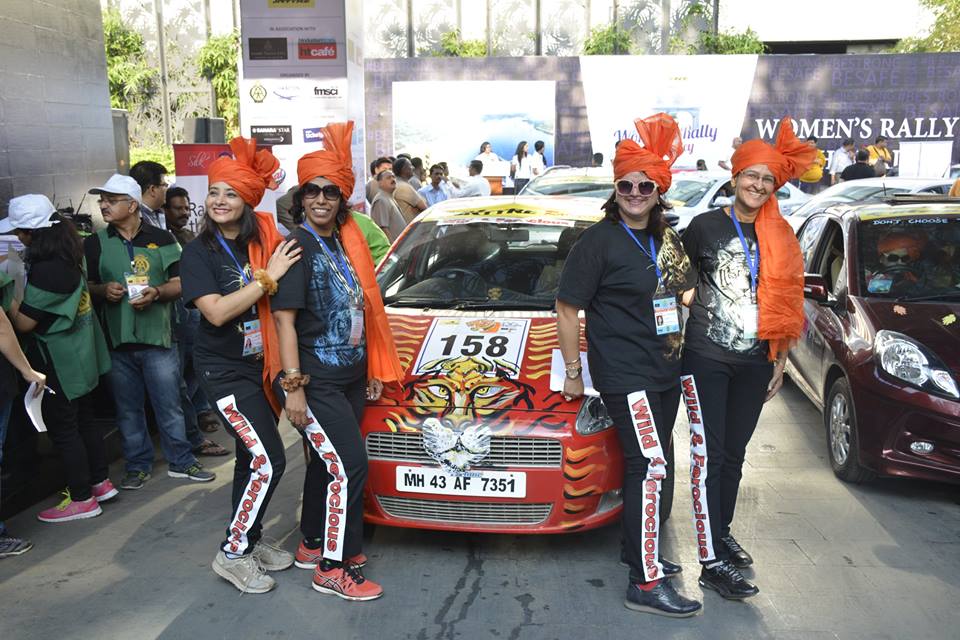 Mumbai, India — March 6, 2016: For the second year in running, Mumbai witnessed hundreds of chic and elegantly spruced up cars driving through the city streets in perfect sync. Close to a thousand women came out just when the sun kissed the city roads on Sunday morning to celebrate the spirit of womanhood and women empowerment. All this, for the second edition of Women’s Rally to the Valley’ presented by JK Tyre & Industries Limited, a women’s car rally organised with Western India Automobile Association (WIAA) and Aamby Valley City on the occasion of International Women’s Day.

Starting from Hotel Sahara Star at 6:45 AM, the beeline of cars decorated with various women empowerment themes,proceeded through the heart of the city. Teams consisting of mothers and daughters, mother-in-laws and daughter-in-laws passed through the iconic Bandra Worli Sea Link, Worli Sea Face, Peddar Road, Chowpatty, Marine Drive, Churchgate to culminate at Aamby Valley for a grand closing ceremony.

Present on the occasion Shri Rajkumar Jangid, Zonal Manager (Sales) – West, JK Tyre & Industries Ltd said, “At JK Tyre, it’s all about caring for people by making their lives safer leading to a cohesive development of the society. We believe that this can be achieved if women are empowered.” He added, “Through this Rally, organised for celebrating International Women’s Day, we want to recognise and celebrate the extraordinary contribution made by generations of women to the society.”

Commenting on the occasion, Mr. Nitin Dossa, Executive Chairman of Western India Automobile Association (WIAA) mentioned that the association has grown from strength of 500 members with over 1,10,000 members today. “Women’s Rally To The Valley is an initiative to spread awareness about various issues affecting women by displaying impactful social messages of women safety. The second edition of Women’s Rally to the Valley is an effort to encourage women to voice themselves and demand a safe society. Over 240 cars  participated with 1000 women, what a way to celebrate Women’s Day!! Be strong, be safe.”

Distinguished figures from the city who have stood up for the rights of women and equality in the society participated with abundant enthusiasm. ‘Mother of rallying’ in India Katy Bhathena  was the first to flag off the rally followed by veteran rallyist Renuka Kripalani. At the end of 150.5 kms long rally, participants indulged at the spa & massage corner, enjoyed live music, relished great food, had a tarot card reader and palmist to engage with and lots of other activities at Aamby Valley.

The results of the rally will be announced on the evening of March 7, 2016. A total of nine trophies are going to be given away including for the winners, runners up, second runner up, best dressed car, best costume, most glamourous team, best theme (car), best slogan (car) and for the eldest women driver. Following day, on March 8, 2016, winners will be awarded at the Award Ceremony.

JK Tyre Motorsport’s association with the sport started off with rallying 30 years ago. Currently JK Tyre organizes various rallies throughout the year. The team managed by JK Tyre Motorsport won the National title nine times and the inaugural Asia title.