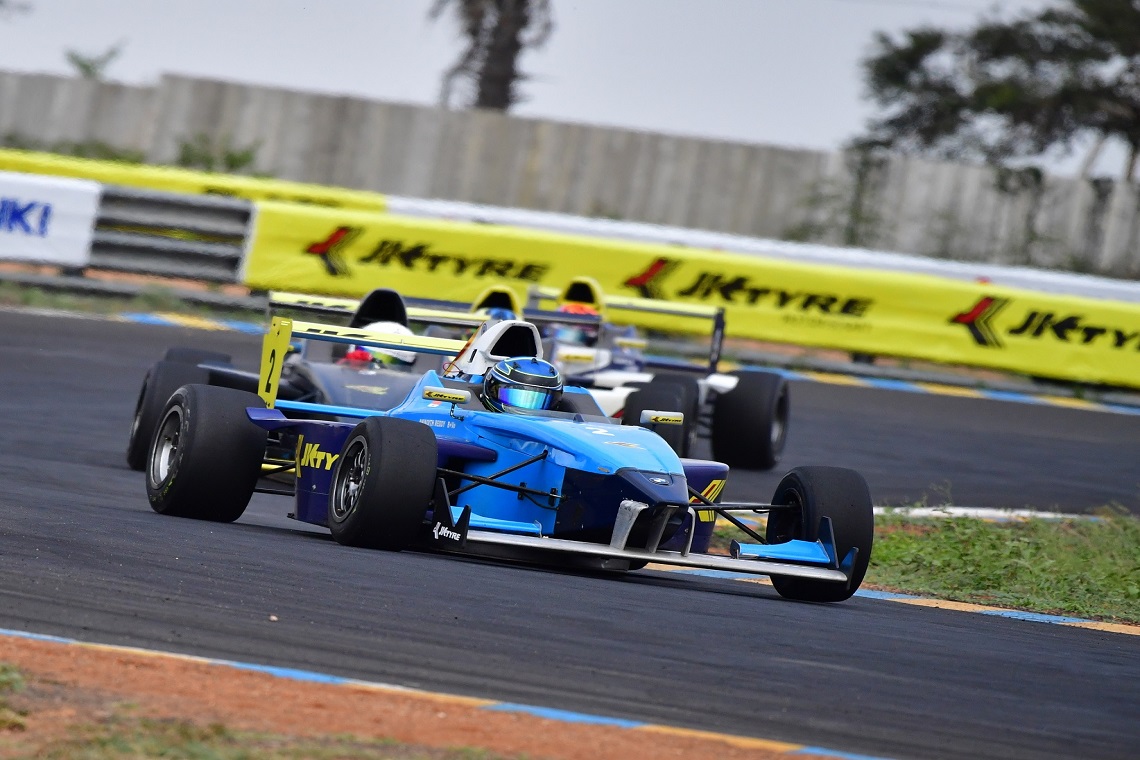 Greater Noida,17th November 2017:The 20th JK Tyre FMSCI National Racing Championship, country’s premier racing series is poised for a spectacular finish, with Anindith Reddy and ChitteshMandody looking strong favourites to run away with the Euro JK 17 and LGB 4 titles at the Buddh International Circuit here over the weekend.

A complete bouquet of entertainment has been etched for the grande finale on Super Sunday, with exhilarating races in the four-wheeler and two-wheeler categories, death-defying stunts by UAE’s renowned stuntmen, and a live performance by top Bollywood rappers Raftaar topping the menu.

Defending champion Anindith from Hyderabad will be the cynosure though. He is leading the table in the Euro JK 17, the country’s most prestigious racing class featuring FB02 cars that can touch 240kmph, with 96 points. He needs just two good races to seal the title once again. He showed his form in the last race, winning two and finishing second in another to surge into the lead.

Chennai’s Vishnu Prasad, who was leading till the last round, ran into bad luck in Round 3 in Coimbatore, failing to finish in either of the races on Day 1. But he came back strongly on Sunday, posting one victory and taking the second place in the next to keep himself in contention.

Vishnu is currently on 82 points and will hope for clean sweep to reclaim the title from Anindith. Nayan Chatterjee of Mumbai, with 73 points, is behind the leaders and will have to do something spectacular to mount any kind of a challenge.

In the LGB 4 category, which is the first step towards single-seater racing and is powered by 1298cc Suzuki Swift engines, ChitteshMandody of Kolhapur with 62 points seems to be the best bet for the title. The Avalanche Racing driver was joint-first in Round 2 but took advantage of Prasad’s misfortune and finished the third round with 20 points to jump into the lead.

Defending champion Prasad of MSport (49 points) had a terrible round that saw him collect only seven points and slip to the second place. The Chennai lad will have to be at his aggressive best to thwart Mandody’s charge. Sandeep Kumar of Dark Don Racing is not too far behind with 43 points but will still need to come up with something special to come anywhere close to the trophy.

JK Tyre Suzuki Gixxer Cup, a single make category for bikers, Joseph Matthew of Chennai is sitting pretty atop the heap with 56 points. After seeming to be almost unbeatable in the initial rounds, he suffered his first defeat in Round 3. But Aizawl’s Malsawmdawngliana is way behind him with 39 points to pose any serious threat to Joseph.

The Buddh Circuit promises to provide a fitting finale to the 20th edition of the JK National Racing Championship with the addition of the high-profile FIM Asia Cup of Road Racing (ACRR), an FIM sanctioned event which is a perfect platform for young riders from different Asian countries.

Top riders from Japan, Thailand, Sri Lanka, Philippines, Nepal, Taiwan and India will be seen in action in what will be Round 3 of the ACCR. India will be represented by Sai Rahil Pillarisetty and Israel Vanlalhruaizela, who are fourth in the standings after the first two rounds in Thailand and Taiwan behind Philippines (5 points) and Thailand (25 points).

The bike lovers in the Capital are in for another grand treat as the Championship will see two super bike races (JK SBK 1000cc and JK SBK 600cc), featuring top riders from across the country.