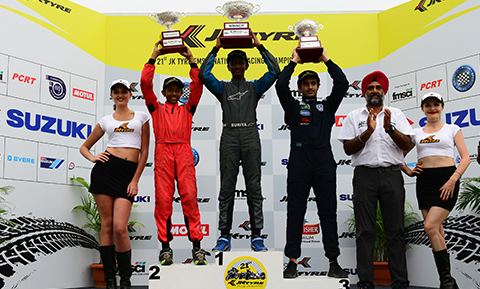 Coimbatore, October 14: Chennai’s Ashwin Datta moved a step closer to his maiden Euro JK title in the 21st JK Tyre FMSCI National Racing Championship as a dramatic Round 3 -- replete with ups, downs and upsets --came to an end here on Sunday.

Ashwin (74 points after R3 ), who was just two points ahead of Nayan Chatterjee (66 after R3) as the action began on Saturday, made the most of Nayan’s DNF to widen his lead. But Chennai’s Karthik Tharani (68 after R3) won the next two races to come back into the equation.

The final race of the weekend, however, saw a totally new set of winners, with Nirmal Uma Shankar, Brayan Perera and Yash Aradhya claiming the podium places. Ashwin finished fourth, though, ahead of his key competitors to be 6 points ahead of the field

The LGB Formula 4 too proved to be topsy-turvy but Vishnu Prasad (59) managed to keep his nose barely ahead despite not having the best of weekends.

Delhi's Rohit Khanna seemed to be cruising ahead after winning the first race on Day 1 and starting Day 2 with another victory. However, a series of incidents led to a number of protests, that saw him being penalized by 20 seconds and slip down from No. 1 to 13.

In the final race, Rohit just couldn't recover his poise and ended up with a DNF. Vishnu too had a poor race, finishing ninth and without a point. Raghul Rangasamy is now on the second place on the Championship table with 57 points.

The other Chennai star Joseph Mathew too had an eventful race, beating Malsawmdawngliana literally at the post. Joseph began cautiously, allowing his rival from Aizawl to take the lead. He overtook him at the halfway stage only to see Malsawmdawngliana streak past him in the final lap.

Just as victory seemed in Malsawmdawngliana's grasp, Joseph outwitted him, winning by a wafer-thin margin of 0.087 seconds. This is Joseph's sixth straight victory in the three rounds and puts him firmly in line for another title.

The JK Tyre Novice Cup too saw a dramatic turn of events, which led to Surya Varathan claiming the championship and Tijil Rao taking the second place.

Hashim EKP, who had won all three races over the weekend to move ahead, was disqualified as he had contravened the competition norms.