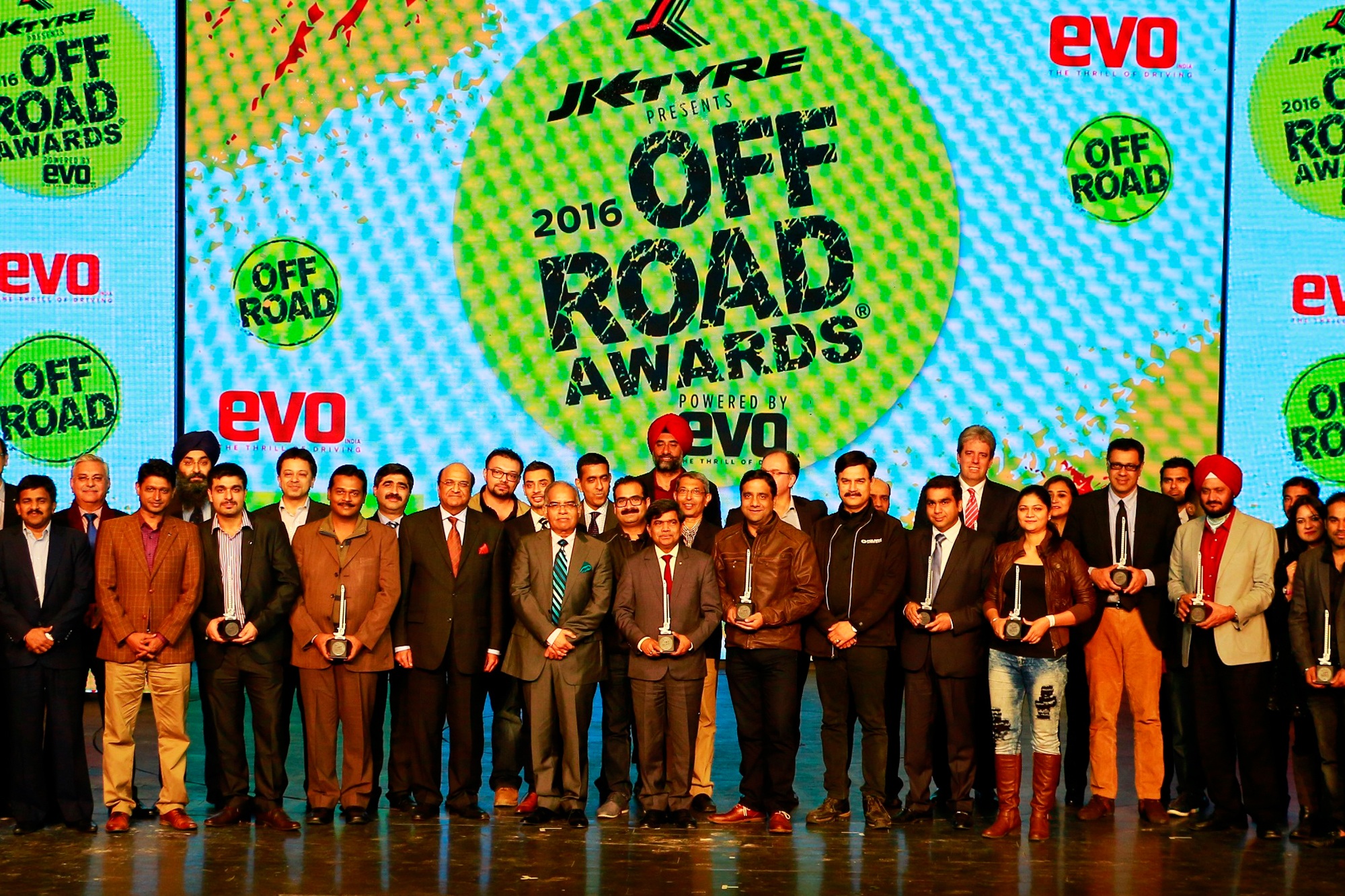 Delhi, India — December 11, 2015— The 2016 Off Road Awards presented by JK Tyre and powered by evo India concluded earlier this evening at the Kingdom of Dreams in Gurgaon and attended by leading Indian automotive manufacturers. This is the second edition of these awards, with the first one taking place in Pune last year.

The jury round took for the country’s premier and only Off Road Awards concluded yesterday under the shade of the Aravalli mountains on the outskirts of the Delhi-NCR region where leading experts from the off-roading and automotive community tested all the nominee vehicles on a mix of on and off-road terrain. The ten member strong jury included Gaurav Gill, India’s best rally driver, rally legend and five time national champion Hari Singh, Jaskirat Nagra, one of India’s leading builder of off-road and expedition vehicles, Kabir Waraich the RFC India champion who has participated in the world's toughest off-road event, Lhakpa Tsering, founder of the Arunachal Festival of Speed and the person who recently finished on the podium of the Raid, Tejas Kothari, the only I4WDTA certified instructor in Asia and leading Indian automotive journalists Siddharth Vinayak Patankar, editor of the Car & Bike Show on the NDTV network, Ouseph Chacko assistant editor of evo India magazine and Sirish Chandran, editorial director of evo India and OFF ROAD India magazine. The jury rated the nominees which included a mix of SUVs, 4x4s, all-terrain vehicles, crossovers, compact SUVs and bikes on a range of parameters including design, interiors, all-terrain capability, comfort, desirability, practicality and most importantly suitability to India.

Commenting on JK Tyre’s association with the OFF ROAD Awards Dr Raghupati Singhania, Chairman and Managing Director, JK Tyre & Industries Ltd said, “The world is looking at India as it proves itself as a promising automobile hub. Off-roaders as a category has gained substantial interest among enthusiasts. At JK Tyre, we have acknowledged the immense potential that this segment has to offer by recently launching a premium range of all-terrain SUV tyres, the Ranger series. I thank everyone involved in making the Off-Road Awards a reality and congratulate the winners and look forward to seeing more action in this space.”

Said Sirish Chandran editorial director of evo India and OFF ROAD magazines, “Off-roading is growing in leaps and bounds and we are the first and still the only magazine to cater to this highly charged and enthusiast driven community. The OFF ROAD Awards were a natural extension to our off-roading activities over the past two years and it has met with tremendous response from the industry, our readers and enthusiasts. This year we had over 50 nominees for our jury rounds and 17 categories in total, and that says a lot about how important this segment is in India.”

Off Roader of the Year - The new Mahindra Thar