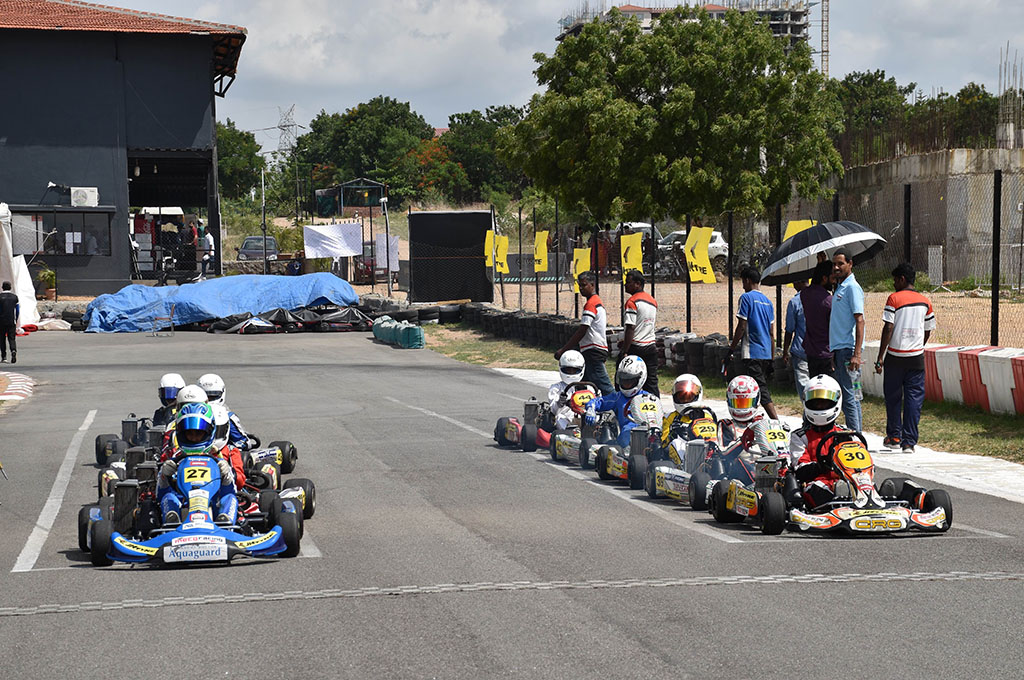 Hyderabad,  24th June 2016: Old rivalries will resume, while new ones will begin as the action moves to the Chicane circuit at the Leonia Resort in Hyderabad for the second round of the 2016 JK Tyre-FMSCI National Rotax Karting Championship this weekend. After an intense fights across the three classes representing Micro Max (7-12 years), Junior Max (13-16 years) and Senior Max (above 15 years) that dominated the opening round of the championship, the heat will be on the championship leaders to maintain their pole position.

“The first round of the 2016 JK Tyre-FMSCI National Rotax Karting Championship produced absolutely thrilling races that speaks volumes about the quality of the grid this year. It comes as no surprise that as many as 11 drivers from this year’s grid are competing in various classes in international karting championships. The depth of talent on show proves that our karting programme that aims to develop the sport from the grassroots level is yielding results,” said Mr. Sanjay Sharma, head Motorsports and Corporate Communication, JK Tyre & Industries Ltd.

In the Senior Max category, defending national champion, Ricky Donison, who dominated the proceedings right from the unofficial practice session to the final race in the opening round, will remain the man to beat. Though, Ameya Bafna of Rayo Racing, who came to the fight with very little track time under his belt and managed to close the gap considerably by the time of the final race, would still need to up his game by a few notches if he hopes to beat the runaway BPC driver in the second round of the championship.

Placed third on the points table, Nayan Chatterjee of Meco Racing will be looking forward to put aside the set-up issues that plagued him in the first round in his bid to unlock more speed from his kart in order to mount a serious challenge for championship lead. To this mix, the presence of Vishnu Prasad also of Meco Racing, who has won multiple national titles in both karting and FB02 class in the JK Tyre National Racing Championship, can upset the calculations of the top three in the championship standings.

In the Junior Max category, a four-way fight is expected between Manav Sharma from Faridabad and the three Meco Racing drivers, Nirmal Umashankar, Paul T Francis and Yash Aradhya. All four championship contenders have international racing experience to back their performance. Sharma drove sensibly to keep out trouble from the first corner skirmishes to score two exquisite victories in the finals and the pre-finals in the first round. But he will have his task cut out in the face of challenge that’s expected to come from the troika of Meco Racing drivers.

Aradhya, in particular, would hope for a better run of luck in Hyderabad having seen his victory chances go up in smoke in Bengaluru due to engine trouble after dominating the official practice sessions and the two heats. In the Micro Max class, Shahan Ali Mohsin, who overcame a 10 second penalty in the final race in the previous round due to a jump start in pre-finals, to take a nail-biting win, would hope to retain his winning touch.

But it won’t easy for him since both Yeasash More of BPC Racing and Ruhaan Alva of newly-formed Peregrine Racing, have the pace and the tenacity to beat Mohsin, who is currently leading the Cadet Class in the Asia Max Championship in Malaysia.

Championship Standings After 1st Round