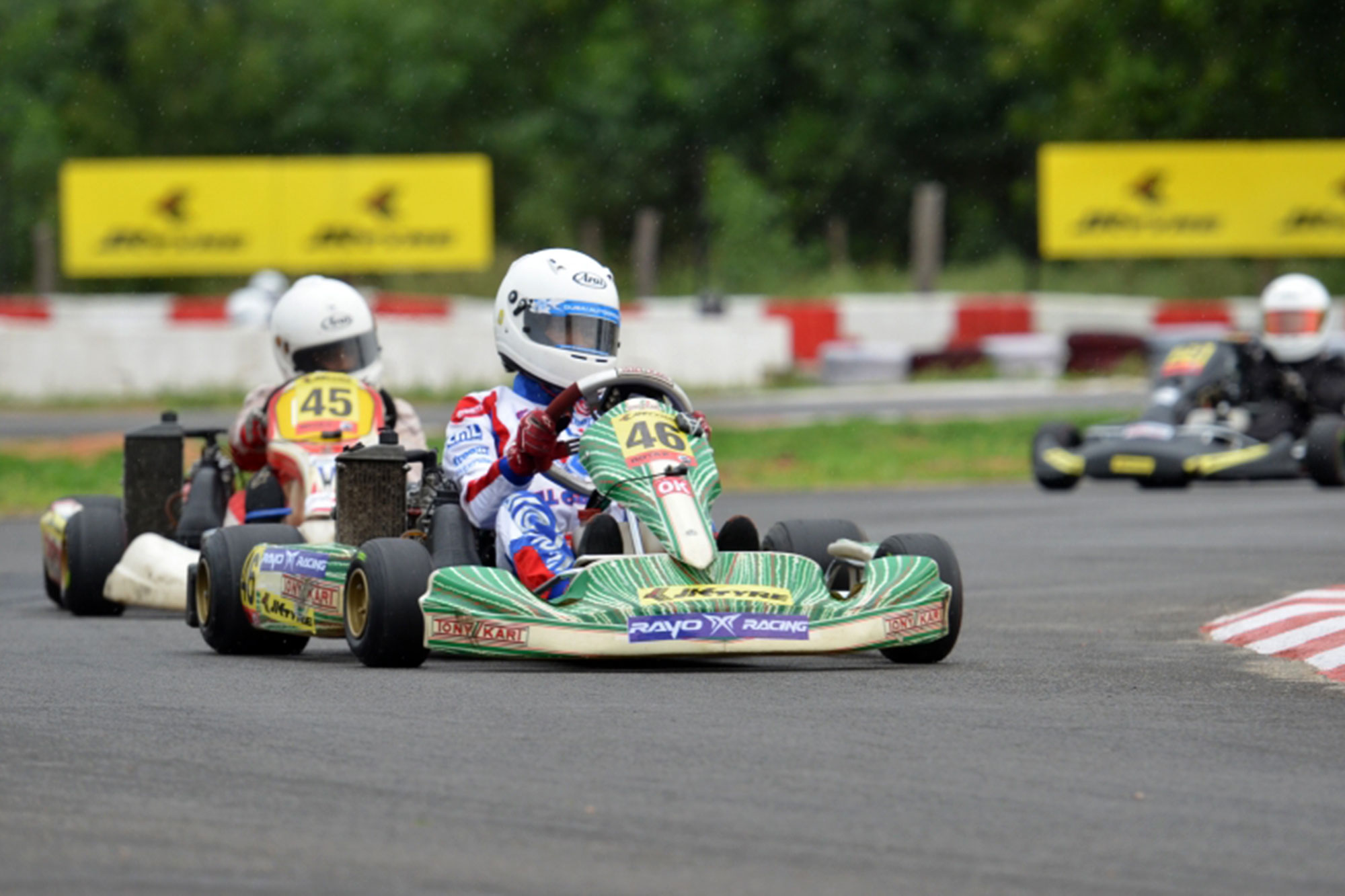 Hyderabad, June 20, 2015: The 12th JK Tyre-FMSCI Rotax National Karting Championship kick started at the brand new Chicane circuit in Hyderabad. During the day there was a heavy downpour which made which made the races more challenging for the karters and more thrilling for the spectators.

After the qualifying the two heats were scheduled. Rain gods played spoilsport in the middle of Heat 1 races of Micro & Junior which forced the drivers in the Senior Max category change to wet tyres.

Agra boy Shahan Ali Mohsin dominated the heat races in Micro Max category. He will take the lead position in the pre-finals tomorrow. In the Heat 1, Nikhil Bohra from Bangalore from Team Meco Racing gave a tough fight to Shahan but could only finish behind him in the second place. Following him closely was Chirag Ghorpade from Bangalore from Team BPC Racing who held the third place. Tables completely turned in Heat 2 as Nikhil could barely manage to keep his second place. Nikhil finished last in the Heat 2 races. Chirag Ghorpade took full advantage of the same and sealed his second place followed by Ruhaan Alva in the third place.

The fight in the Junior Max category was an intense one as the drivers gave a fine performance and gave each other a tough competition. During Heat 1, Bangalore boy Akash Gowda from Team Meco Racing took the lead ahead of the other and finished first. Closing in second was Pradyumna V Danigond from Kolhapur from Team Mohites Racing followed by Paul Francis who finished in third.

Last year’s micro max champion Yash Aradhya took everyone by surprise and gave the big boys in the category a stiff competition. Yash who started sixth in Heat 2 walked away with the chequered flag. Mohammed Nalwala who was lead in the qualifying finished second in Heat 2. Aanjan Patodia from Mumbai from Team Rayo Racing gave a good fight to the top five contenders and managed a third place.

The most exciting race of the day was undoubtedly the races in the Senior Max category. With the defending champions lining up the grid it was a treat to watch them in full action. The heavy rains just added to the excitement. It was a fight from the start to the finish between Mumbai boy Ameya Bafna, Vishnu Prasad from Chennai, Nayan Chatterjee from Mumbai, Chittesh Mandody from Kolhapur. After a bumper to bumper 15 laps race, Ameya Bafna emerged first in the leaderboard followed by Vishnu Prasad and Nayan Chatterjee.In Heat 2, Ameya Bafna despite starting first could only manage a fifth place finish as Vishnu ensured that he took the lead position right from the start. Giving Vishnu a tough fight was Kolhapur lad Dhruv Mohite who finished second followed by Nayan Chatterjee closing in on third. But due to technical infringement Vishnu was disqualified which made Dhruv the leader in the Heat 2 pushing Nayan to second place and Ricky Donison to the third place.

With the competition getting intense on Day 1, Day 2 promises to offer a whole lot of adrenaline rush to the audiences.