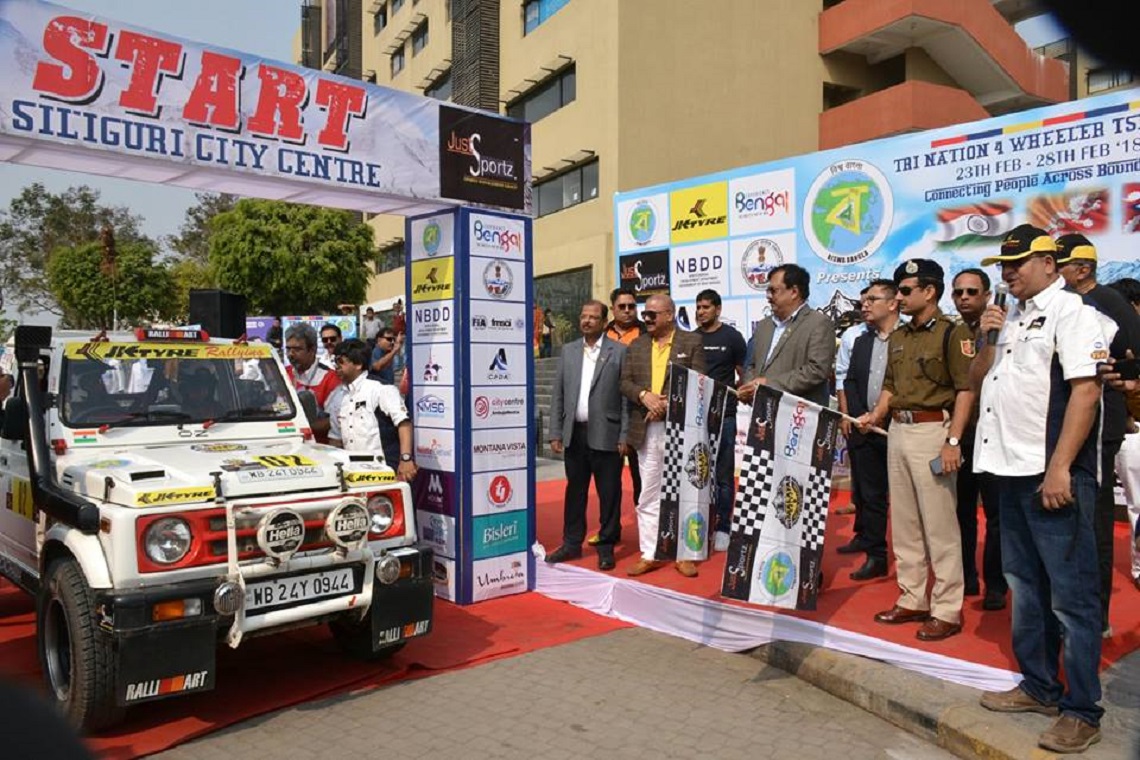 Being held in association with West Bengal Tourism, this unique rally aims at promoting motorsports, showcasing the enormous tourism potential of North Bengal and the contiguous areas of Bhutan and Nepal, and boosting PEOPLE TO PEOPLE CONNECTIVITY and DRIVE TOURISM between the three friendly neighbouring countries.

The BISWA BANGLA JK TYRE HIMALAYAN DRIVE 6 is distinct from other TSD rallies since it covers a wide variety of terrain, ranging from tarmac, river beds, dirt tracks, forest roads and mountainous roads. It will skirt steep slopes that will not only present a tough challenge to the participants but will also offer a lot of thrill to them as well as to spectators.

More than 100 participants, including top rallyists from the country, will take off from Silliguri on Friday morning and will journey through North Bengal’s lush forests that are home to a rich variety of flora and fauna, including the Royal Bengal Tiger, the one-horned rhino and the Asiatic elephant. It will go through picturesque tea gardens too before entering Nepal trough the Kakarbita border hitting the East West highway to the famous jungle paradise Chitwan in Nepal.

On Day 3, the participants will journey to the famous jungle roads on the fringes of the Chitwan Reserve Forest areas through the gravel and dirt tracks before coming back to Chitwan for a well deserved rest.

The rallyists drive back from Chitwan through the Dooars on Day 4 and after driving through the heart of Terai region in Nepal to enter India through the Kakarbita border en route to Murti in the Dooars for the night halt.

The participants spend the next day driving through the Dooars region going through serene terrain with it’s tea gardens, jungle tracks and river beds before entering the 3rd country Bhutan at Phuntsholing.

For the 5th & Final Leg, they will leave Phuntsholing through amazing and adventurous hill tracks and climb up the hills to reach Darjeeling, the ‘Queen of Hill Stations’ where the Rally finishes . The gala prize distribution ceremony will take place in Darjeeling on February 28.

The Rally draws inspiration from Hon’ble Chief Minister of West Bengal Ms Mamata Banerjee’s vision of Connecting Bengal to its neighbours and encouraging People to People Connectivity in the region.

The press was welcomed by Sri Siddhartha S. Bose, Director Just Sportz and Chairman of the Rally. The conference was addressed by Sri Tamal Ghosal, Director of Just Sportz and Clerk of the Course (COC) of the Himalayan Drive 6 Car Rally, and Sri Binny Sharma, the Chief Rally Coordinator.

Sending his best wishes to the Rally, Sri Indranil Sen, Hon’ble Minister of State for Tourism, Govt. of West Bengal, said: “The development of North Bengal, especially for tourism, is a priority for the Government. The Rally promises to showcase and unveil the lesser known and yet to be explored areas of North Bengal which can will surely become one of the most treasured tourist destinations in India in the near future. I thank Just Sportz wholeheartedly for promoting such destinations.”

“JK Tyres & Industries Limited, India’s leading tyre manufacturer, has been associated with Himalayan Drive as the Title Sponsor since its inception in 2013. Mr. Sanjay Sharma, Head, Corporate Communication and Motorsport of JK Tyre & Industries, said: “We are really excited about the JK TYRE HIMALAYAN DRIVE 6. It is India’s only international rally that goes into two other countries. This is not only a great opportunity for our top rallyists but will also give a huge boost to the sport in all three countries.”

Biswa Bangla is the presenting sponsor while JK Tyres is the Title Sponsor and West Bengal Tourism with its “Experience Bengal” theme while Gorkhaland Territorial Administration and North Bengal Development Department are the Principal Sponsors along .Techno India Group , City Centre Silliguri , Club Montana Vista , Neotia Getwell Hospital, Bisleri who have joined in as associate sponsors . Radio Misty is the Radio Partner of the Event.