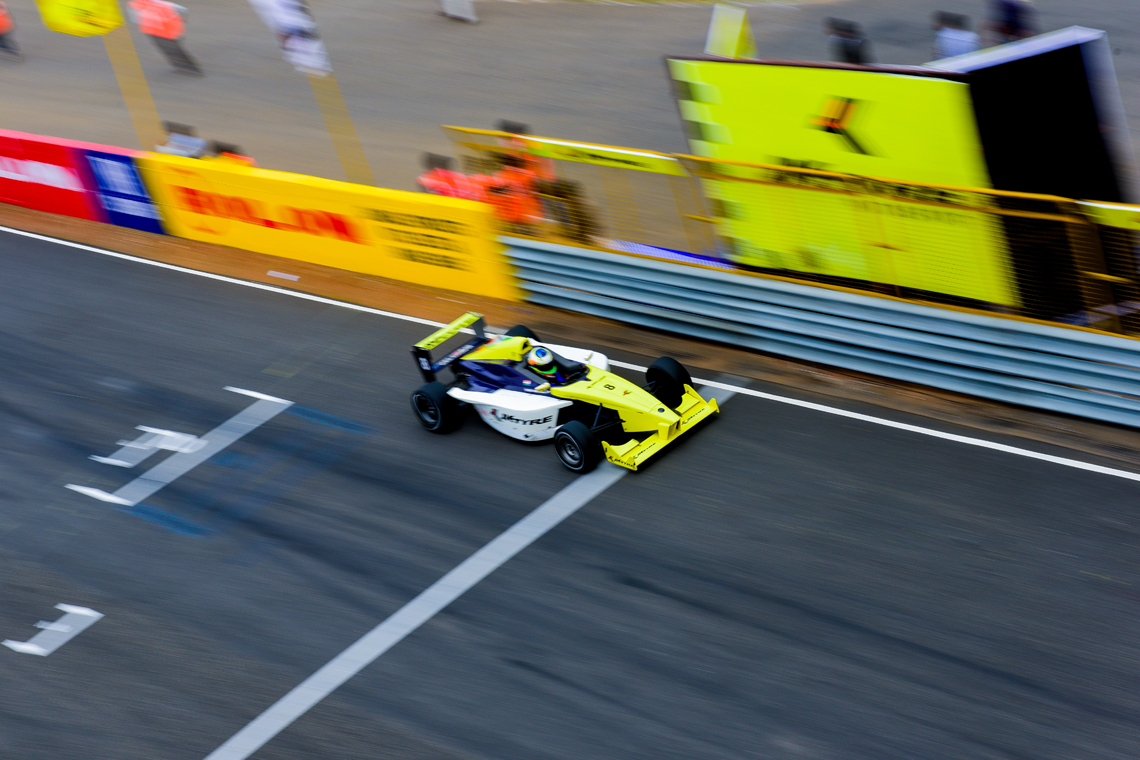 *Vishnu will look to consolidate top spot in Euro JK 17

Coimbatore,  04th August 2017:: Round 2 of the 20th JK Tyre FMSCI National Racing Championship gets under way at the Kari Motor Speedway here on Friday, with the table toppers looking to consolidate their positions on the leader board.

The Chennai duo of Vishnu Prasad and Joseph Matthew has already laid claim to the mantle of strong favourites, after comprehensively winning all their races in the opening round of the Euro JK 17 and the Suzuki Gixxer Cup.

Kolhapur’s Chittesh Mandody was equally imperious in the LGB Formula 4, sweeping the maximum possible 30 points. He, however, would be aware that defending champion Vishnu feels very much at home in this category and can upset his applecart.

In the JK Tyre RedBull Road to Rookie Cup, Sri Lanka’s Jaden Gunawardena remained unbeatable in the first round. But as he is not eligible for points, Aizawl’s young Lalhruaizela is ahead on the table with second and third-place finishes.

“The season has begun on a spectacular start,” Sanjay Sharma, head JK Tyre Motorsports, said. “The drivers now know what they are up against. They will come up with new plans and tactics to counter the field. It’s going to be exciting,” he added.

All eyes will be on Vishnu Prasad (40 points), though, when the curtain goes up this weekend. He didn’t take long to get used to the BMW FB02 car and surprised everybody by breezing to victory in each of his races.

Second placed Anindith Reddy (27 points) and Nayan Chatterjee (24 points), though will be breathing down his neck. Hyderabad’s Anindith, last year’s winner, and Mumbai’s Nayan, second runner-up, have not only pedigree and speed but also enough experience in this car.

One good weekend for either could easily open up the race. Bengaluru’s Akash Gowda is not far behind too, with 21 points in his kitty.

The introduction of a couple of two-wheeler categories as support races has added spice and variety for the spectators, making the championship even more exciting.

The Kari Motor Speedway loved the Aizawl Wonder Kids and they can be expected to try everything in their power to topple Gunawardena from the perch in the Rookies Cup. With as many as eight of them, the young boys might well take it as a matter of pride and ego as well.

Their senior counterparts, Malsawmdawngliana (13 points) and Lalmawipui (12 points), will also try something similar in the Gixxer Cup. They are currently in the second and third positions.