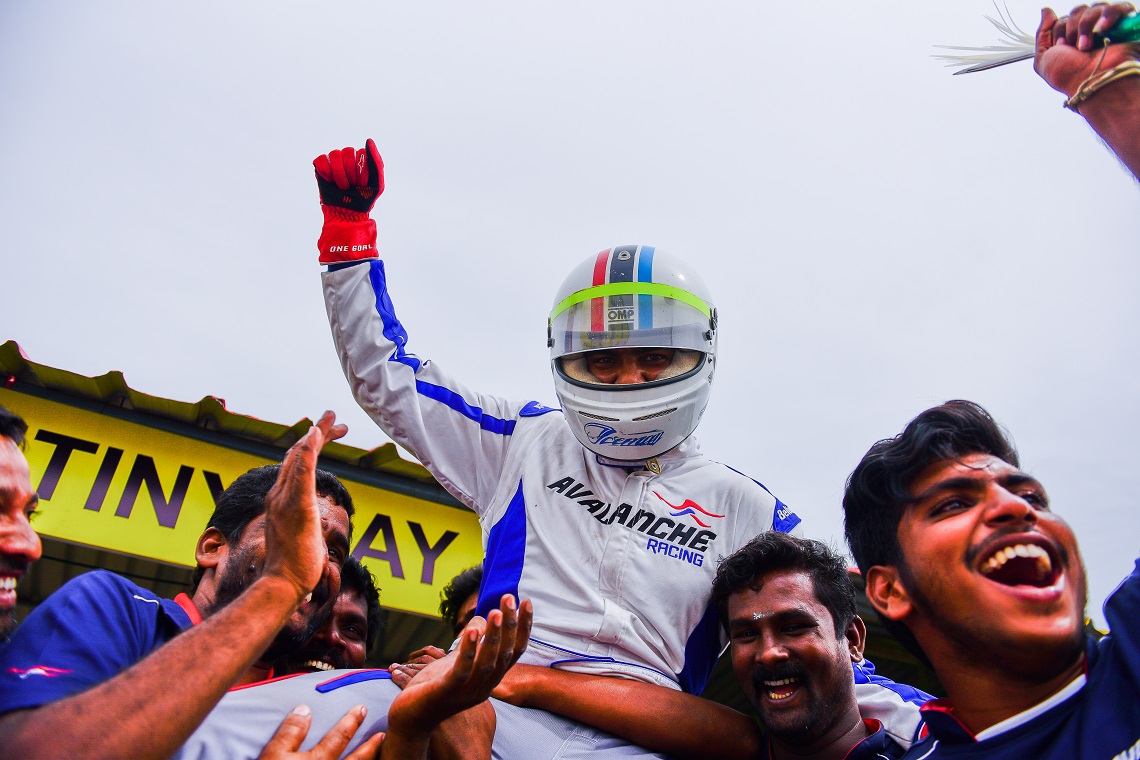 Coimbatore,  9th July 2017:Chennai’s Vishnu Prasad and Kolhapur’s Chittesh Mandodi did the star turn in the opening round of the 20th JK Tyre FMSCI National Racing Championship, completing a clean sweep in their primary races here at the Kari Motor Speedway on an action-packed Sunday.

Vishnu had his task cut out in the morning, in front of a packed crowd including 500 school children, with the reverse grid coming into play in the Euro JK 17. He began at P6, that too behind the two drivers who were on his tail all through Saturday: Nayan Chatterjee (P5) and Anindith Reddy (P4).

That, however, didn’t deter him as he waited for his opportunity to storm past a determined Vikash Anand who started on pole. He was unstoppable, thereafter, showing amazing pace, calm and control under pressure.

It was expectedly easier for him in the fourth and last Euro JK race of the day, as he had the advantage of starting in front of the pack. He clocked the fastest lap of the day (1:01.246 minutes), finally getting the better of Anindith Reddy who had been the quickest racer until then.

Anindith made up two places, starting from P4, to take the second position for a fairly rewarding opening round. Nayan Chatterjee also grabbed his third podium, by keeping pace with Anindith.

It was an exciting day for Coimbatore’s motor sports’ fans, with music, stunts and high speed action being the order of the day.

The races, however, proved to be the show stealer, with the day’s second LGB4 race claiming the top honours. Kolhapur’s Chittesh Mandodi and Vishnu Prasad were engaged in a neck and neck battle, exchanging the lead in a series of daring moves.

The race itself saw two restarts, one of them owing to a collision that even saw a car flying in the air. Chennai’s Saran Vikram added further to the drama in the closing laps, joining the duo to make it a three-way clash as the chequered flag beckoned.

In the end, Mandodi prevailed with his bull-headedness while Vishnu had to make do with the second place. Saran settled for the last place on the podium, perhaod ruing not making the big break. Earlier in the day, Mandodi made light of his P7 start to romp home for his second consecutive victory in the LGB4.

In the Suzuki Gixxer Cup, another Chennai racer emerged on top, with Joseph Mathew proving to be uncatchable for the second successive day. Aizawl’s Malsawmdawngliana and Lalmawipuia claimed the second and third positions.

In the JK Tyre Red Bull Road to Rookie Cup, Sri Lanka’s Jaden Gunawardena continued his winning run, outclassing the field once again. Jaden clocked fast times in each of the 8 laps, to finish the race in just 11:47.188 minutes, a full 3.235 seconds ahead. Chennai’s Varoon S spoiled the Aizawl wonder kids’ party by streaking to the second place, pushing Lalhruaizela and Lalnunsanga to lower positions.