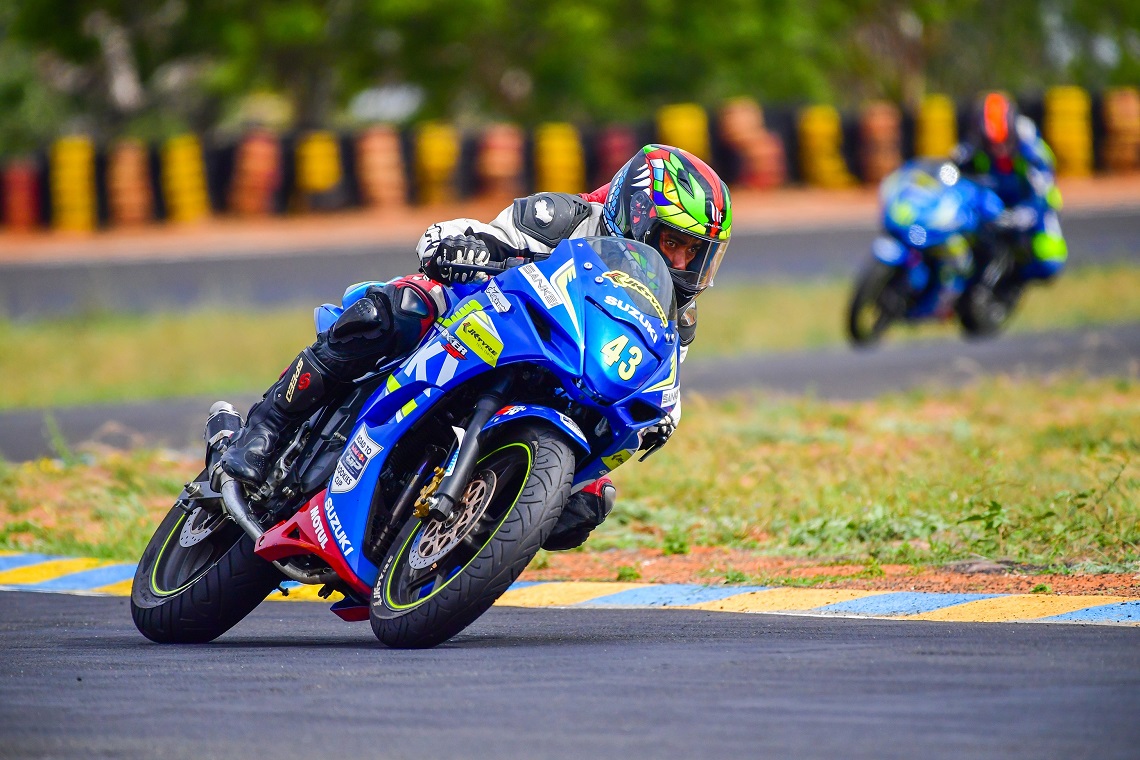 Coimbatore,  1st September 2017:The Chennai duo of Vishnu Prasad and Joseph Mathew will be the cynosure of all eyes as the third and penultimate round of the JK Tyre FMSCI National Racing Championship 2017 gets under way here at the Kari Motor Speedway on Saturday.

Vishnu staved off a stiff challenge from defending champion Anindith Reddy despite being beset by engine problems to hold on to his top position in the Euro JK class; Joseph, on the other hand, has so far been undefeated in the Suzuki Gixxer Cup and will look to continue his winning streak.

The Red Bull Road to Rookie Cup holds particular significance as the lucky biker who will represent India in the Road to MotoGP in Spain will be identified after this round.

The twelve youngsters in the age group of 12 to 16, who had been identified after elaborate selection trials across the country, have impressed everybody with their skills and fighting instinct.

And it is all likely to come down to a showdown between two of Mizoram’s eight wonder kids. Lalhruaizela (38 points) is clearly better placed going into the weekend; Lalnunsanga trails him by 8 points and will need the leader to make a horrible mistake to topple him and win the ticket to Spain.

“The Red Bull races are really going to be exciting. We have already seen these boys race like champions,” Sanjay Sharma, head of JK Tyre Motorsports said. “With an all-expenses paid trip to the mega event in Spain at stake, I am sure they will fight even harder,” he added.

In the Euro 17, Vishnu suffered a huge setback as he didn’t finish in Race 1 due to an engine problem and managed only 24 points in the Round to squander his massive 13-point advantage.

Hyderabad’s Anindith and Mumbai’s Nayan Chatterjee made the most of his misfortune to reduce their deficits. Vishnu is at the moment on 64 points, Anindith on 63 and Nayan not so far behind on 54. A good weekend here can throw the championship open for the final round.

In the LGB Formula 4, Prasad enjoyed a great stroke of luck and caught up with the leader Chittesh Mandody of Kolhapur on 42 points. Chittesh had looked solid in Round 1 but after winning the opening race in Round 2, managed only 2 points in the remaining two. He suffered a 30-second penalty for an infringement in race 2 that blew away his chances.

In the Gixxer Cup, Aizawl racer Lalmawipui (23 point) and Sanjeev Mhatre (22 points) are trailing Joseph (40 points) and will hope to at least come closer to him over the weekend.