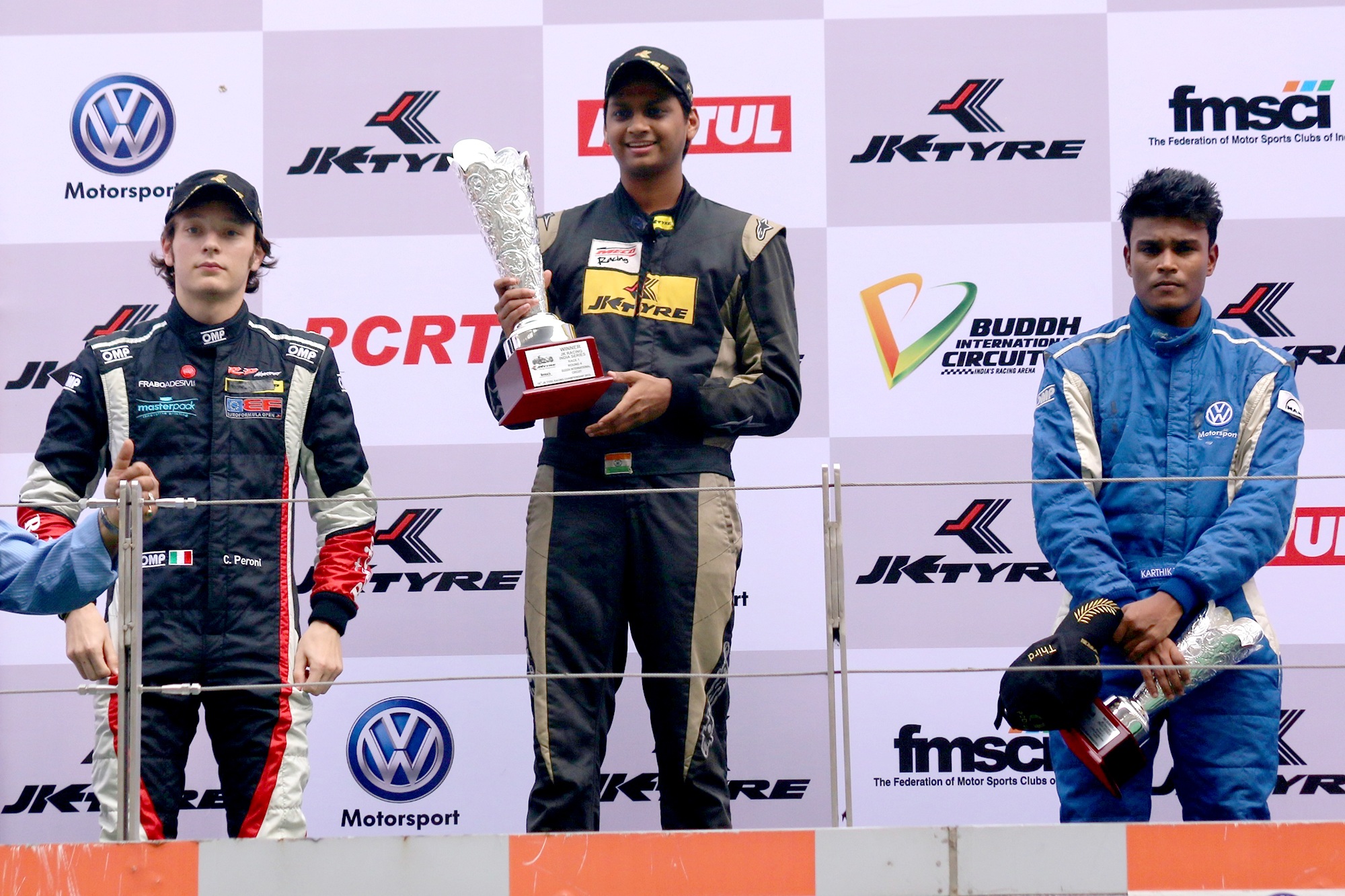 Greater Noida, November 28, 2015: The final round of the 18th JK Tyre Racing Championship got off to a rollicking start on Saturday as Ajay Kini, Vishnu Prasad, Sailesh Bolisetti romped home with emphatic victories in their respective categories at India’s only F1 track Buddh International Circuit.

In the first race of the day – Formula LGB4, Ajay Kini of Chennai edged out his nearest rival Krishanraj Mahadik (both of Team Dark Don Racing) by a gap of 0.270 seconds, to establish himself as the firm-favourite for the title, while the talented Vishnu Prasad, racing with the Meco Racing, finished third. Raghul Rangaswami (Meco Racing), who started the day second on the Championship table, finished fourth. In the fourth and final race of the day, Sudharshana Rao (Dark Don Racing) sealed a narrow win, finishing just 0.112 seconds ahead of Krishanraj Mahadik while Ajay Kini finished third. Going into the final-day of the championship, Ajay Kini would be hoping to add the final-icing to the cake in what can be described as a coming-of-age season for him.

However, the story of the day was young Vishnu Prasad who clinched the JK Racing India series in style on Saturday itself with 2 races to spare. Further enhancing Chennai’s growing reputation as the motorsport nursery of India, Vishnu notched up a brilliant comeback from behind victory over Constantino Peroni, to emerge a deserving winner. Karthik Tharani’s two position penalty for overtaking under the yellow flag proved to be his undoing as he slipped the third position. Vishnu has now 3 championship titles in the JK Racing India series. With 2 races to go on Sunday, Vishnu has an opportunity to touch the magical 3-figure mark as the BIC braces up for the Super Sunday.

Meanwhile, the championship title in the JK Tyre-VW Vento Cup remains up for grabs as Sailesh Bolisetti led from start to finish, going notch up with an important victory on Saturday to stay in contention. Championship leader Anindth Reddy Konda finished second while Karminder Singh finished third.

Earlier, the day had started with the qualifying sessions of each category. Constantino Peroni from Italy lead in the JK Racing India Series, while Rohit Khanna lead in the Formula LGB 4. Eventual winner Sailesh lead the JK- VW Vento Cup during the qualifiers. In the qualifying race of the JK Super Bike Cup, Deepak Ravi Kumar finished first.

Adding to the day’s excitement, JK Tyre in association with Volkswagen also organised a media race drawing participation from many enthusiastic journalists from all over the country.